How foreign presses are covering the George Floyd protests in the U.S. 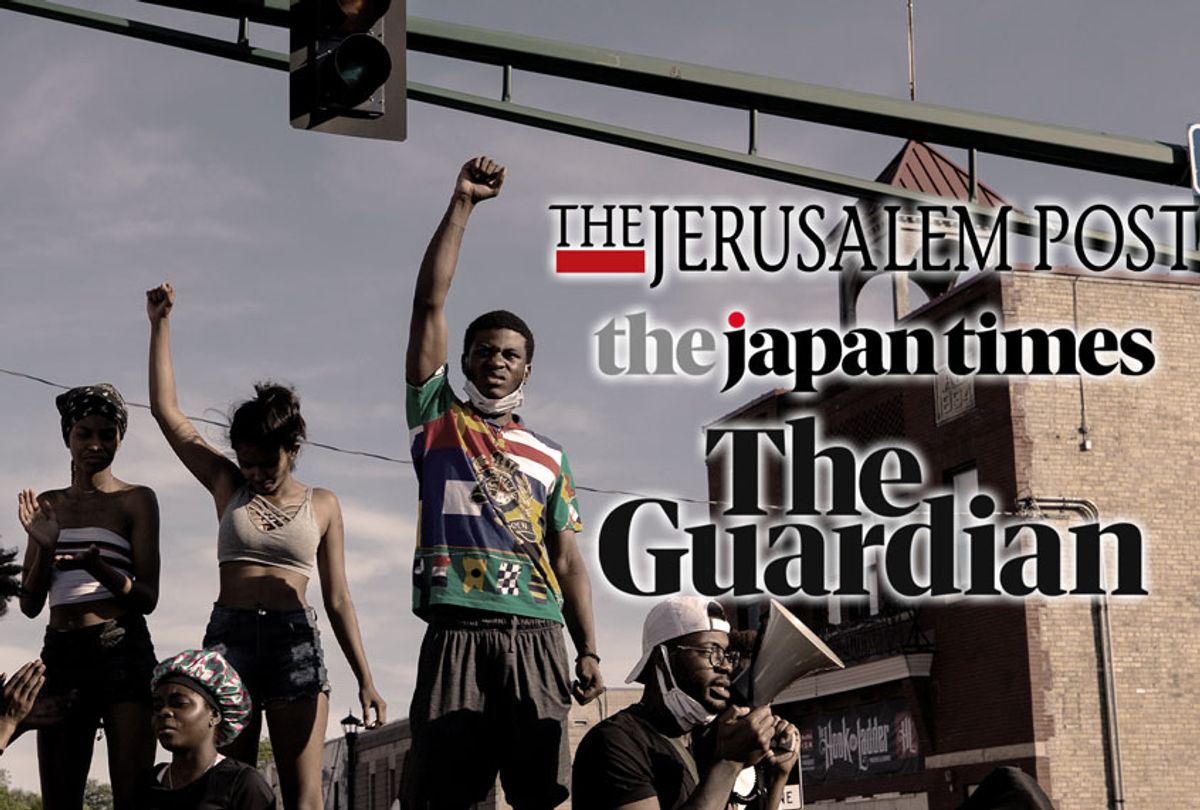 Protestors in Minneapolis | Logos from The Jerusalem Post, The Japan Times, and The Guardian (Getty Images/ WikiMedia/ Salon)
--

The George Floyd protests aren't just making headlines here in the United States. Across the world, major international publications are covering the racist police killing and subsequent protests in ways that underscore both the magnitude of the injustice and the extent to which the travesty has embarrassed America on the world stage.

In the United Kingdom, The Guardian published an editorial by public policy attorney and writer Malaika Jabali with the telling headline, "If you're surprised by how the police are acting, you don't understand US history." As she points out, "policing in America cannot be reformed because it is designed for violence. The oppression is a feature, not a bug." Jabali goes on to explain how forerunners to modern police forces like the Texas Rangers (which stole indigenous territory) and slave patrols had racist motivations from the start, while northern police precincts were created to control labor protests against economic exploitation that were described as "riots" by business elites.

In Asia, The Japan Times published a story Friday that covered misinformation which has spread online about the protests. The article mentioned that reports of professional anarchists posing as protesters, George Floyd's death being staged and American authorities cutting communications in the nation's capital are all examples of fake news being spread online, with much of it geared toward discrediting the protesters.

The website China Daily, by contrast, highlighted the international nature of the response to Floyd's death by quoting extensively from a sermon by the Reverend Al Sharpton, one which mentioned solidarity protests in England and Germany.

The Jerusalem Post included coverage of how former Vice President Joe Biden, the presumptive Democratic presidential nominee, was invited to attend Floyd's funeral after requesting permission, while President Donald Trump is not expected to go to any of the Floyd services. Another story from the same publication covered how two police officers in Buffalo, New York were suspended without pay after they were caught on video shoving a 75-year-old man to the ground during protests, seriously injuring him in the process. Russia Today, which is connected to the Russian government and has been accused of being a propaganda outlet, reported on the Centers for Disease Control head Robert Redfield facing "wrath" for warning that the Floyd protests could be a "seeding event" for another coronavirus outbreak. The site also criticized Slate for writing an article that seemed to condone violent protests, putting in its headline, "Liberal magazine Slate declares violence is 'important' for protests, does NOT get censored by Twitter."

News.com.au included a report on a cyclist "who reportedly had [an] Aussie accent" assaulting a girl for putting up a sign commemorating Floyd. In a separate story, it covered how Twitter took down a Trump campaign video about Floyd on the grounds that it violated copyright, with the publication noting that Trump has been retaliating against Twitter for fact-checking and adding warnings to other tweets.

"Mr Trump has pledged to introduce legislation that may scrap or weaken a law that shields social media companies from liability for content posted by their users," the story wrote.