Kellyanne Conway gets photo-sophical: "Is it a 'photo-op' because a photo was taken?"

"I know it ended up being a 'Sesame Street' Grover word of the day, but that doesn't make it right" 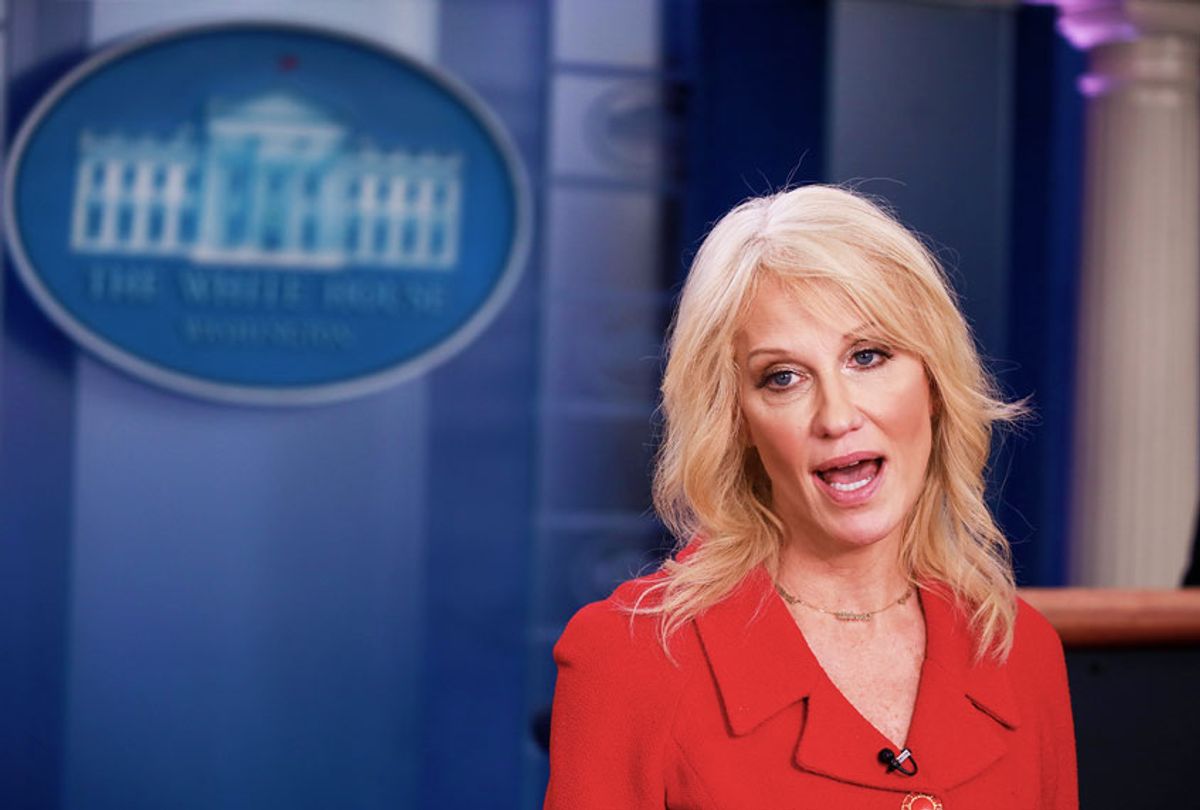 White House counselor Kellyanne Conway told reporters on Tuesday that "just because a photo was taken" does not mean that President Donald Trump's appearance in front of a church to pose for photographs with a Bible in his hand, without going inside or praying, was actually a photo-op.

"I think the words 'photo-op' itself call into question — you're looking in somebody's heart and wondering — second-guessing why they would go over there," Conway said at a White House press gaggle.

"Is it a 'photo-op' because a photo was taken? While the president of the United States was in front of a church where he went on Inauguration Day? Where every president has gone for more than two centuries?" Conway questioned.

"I think that, itself, is a mischaracterization," she continued. "I know it ended up being a 'Sesame Street' Grover word of the day, but that doesn't make it right — and it doesn't make it true."

Police backed by the National Guard on Monday unleashed tear gas, rubber bullets and flash-bang shells on peaceful protesters to clear the way for the president to have his photo taken holding a Bible in front of historic St. John's Episcopal Church. A few hundred yards away, Trump addressed the nation from behind a wall in the safety of the Rose Garden, where he threatened to mobilize the U.S. military against citizens protesting police brutality.

Trump then crossed the street to give journalists the opportunity to photograph him holding a Bible in front of the church, which he hoisted like a WWE wrestler who had just won a championship belt.

"Is that your Bible?" a reporter asked.

"It's a Bible," Trump replied.

The president called a handful of senior officials to stand with him for the cameras. The event lasted about three minutes, which an administration film crew captured and later chopped up into a campaign-style propaganda video posted to the official White House Twitter page.

The event has become a flashpoint for debate and denialism, with Trump and his allies pushing back against insider accounts that painted the president as both fearful and authoritarian.

Fox News host Laura Ingraham on Wednesday took to Twitter to deny reports that officials had used tear gas on the protesters.

Reporters who had been on the ground quickly hit back, with one describing Ingraham's claims as "teargaslighting."

"To describe the sensation to you, my eyes are just filling with tears and absolutely stinging," said Hunter Walker, White House correspondent for Yahoo News, who linked to a video of the police action.

"This is like doubly Orwellian because I was gassed," he added. "These people are literally asking me not to believe what my eyes saw and felt. It's actual teargaslighting."

The order to clear the square was reportedly given personally by Attorney General William Barr, though a Department of Justice official told The Washington Post that Trump's church visit was unconnected.

"This plan was happening," the official said, "regardless of any plans of the president."

"The military moved them back," Trump said of the protesters. "I guess they just reported there were no — what do you call them? — the rubber bullets. There was none of that used. They just moved them back. They didn't know until just shortly before that I was going there. Somebody suggested. I said, 'Let's go. Let's walk.' And we walked from the White House, and I think everything was handled very well," Trump said.

"Religious leaders loved it," he added.

"I am deeply shaken," Rev. Gini Gerbasi, a rector for St. John's Episcopal Church in Georgetown who had attended the protest, wrote in a Facebook post Monday night.

"I did not see any protestors throw anything until the tear gas and concussion grenades started, and then it was mostly water bottles. I am shaken, not so much by the taste of tear gas and the bit of a cough I still have, but by the fact that that show of force was for a PHOTO OPPORTUNITY," she wrote.

"PEOPLE WERE HURT SO THAT HE COULD POSE IN FRONT OF THE CHURCH WITH A BIBLE! HE WOULD HAVE HAD TO STEP OVER THE MEDICAL SUPPLIES WE LEFT BEHIND BECAUSE WE WERE BEING TEAR GASSED!!!!" the reverend added.

"I think those criticisms, people have a right to make them but I think they're unfortunate because they have more than a tinge of calling into question the president's motivation for going to a church that had been set on fire by anarchists and arsonists less than 24 hours earlier," she said.