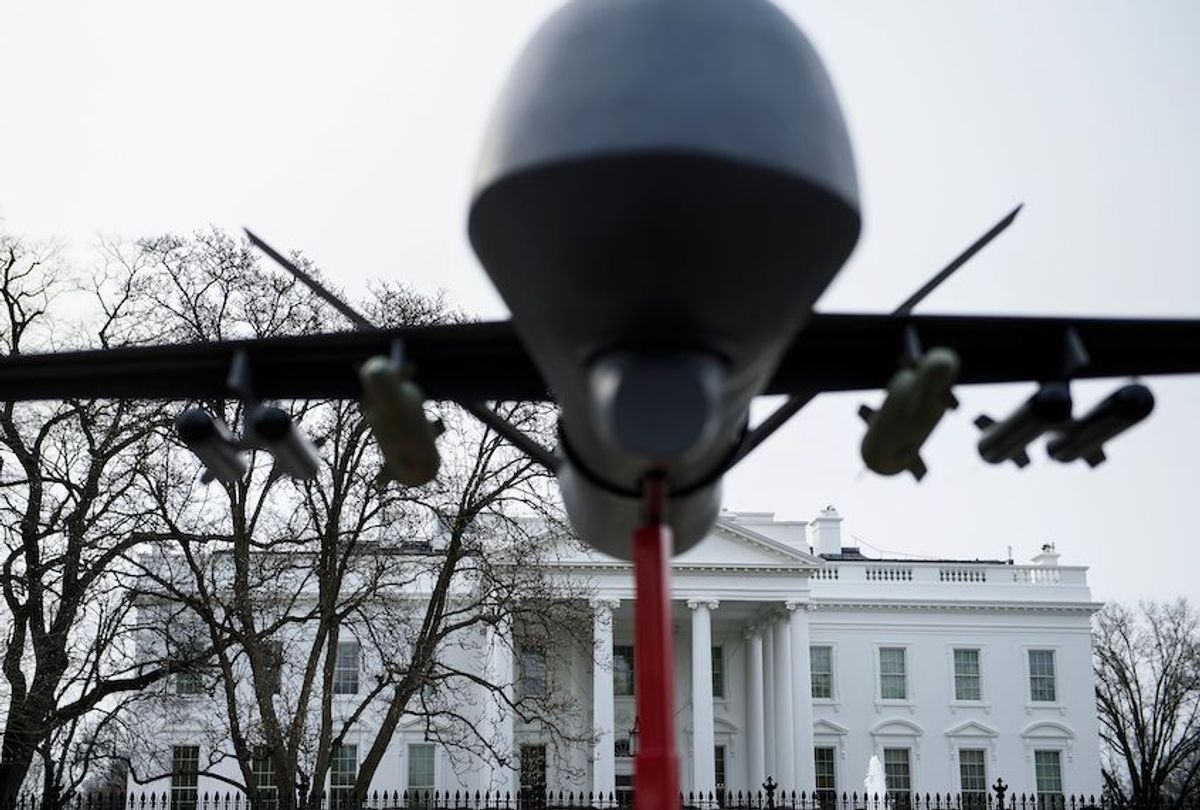 A military drone replica is displayed in front of the White House during a protest against drone strikes on January 12, 2019 in Washington, DC. (Brendan Smialowski/AFP via Getty Images)
--

Democrats on the House Oversight Committee, including Reps. Alexandria Ocasio-Cortez and Ayanna Pressley, are investigating the Trump administration's potentially illegal use of predator drones and unidentified law enforcement officers to surveil nationwide protests over the police killing of George Floyd, calling both tactics a "gross abuse of authority."

In a letter to Acting Homeland Security Secretary Chad Wolf on Friday, the lawmakers demanded that the administration hand over all documents related to Customs and Border Protection's May 29 deployment of a drone commonly known as Predator B to spy on demonstrators in Minneapolis, where George Floyd was killed by police officers.

"The drone that was flown on May 29, 2020, was reportedly also flown far outside the bounds of CBP's jurisdiction," the letter states. "Federal law authorizes CBP to conduct its missions within a 'reasonable distance,' not to exceed more than 100 air miles inland, from an external boundary of the United States."

The lawmakers demanded that DHS "provide a full accounting of its activities by June 11, 2020, including a complete list of all jurisdictions where it policed protests, the full cost of those efforts, and the legal authority permitting its intervention."

Jason Paladino of the Project on Government Oversight first highlighted CPB's use of the predator drone in Minneapolis on Twitter late last month. The ACLU called the surveillance tactic "deeply disturbing" and said the Trump administration's use of drones to spy on protesters "should be halted immediately."

The House Oversight Committee Democrats also raised alarm at the Trump administration's announcement that it would deploy agents from CBP and Immigration and Customs Enforcement (ICE) across the nation to bolster police efforts to quell mass demonstrations. As Common Dreams reported Saturday, lawmakers, journalists, and activists are growing increasingly concerned about the rapid proliferation of unidentified law enforcement agents in D.C. and elsewhere, with one senator describing them as "American secret police."

News of the deployment of ICE and CPB agents, the Oversight Committee lawmakers said, "is particularly alarming given that, for almost a year, the committee has been investigating racist, sexist, and xenophobic comments made by CBP employees in secret Facebook groups."

"CBP has been obstructing the committee's investigation, and CBP employees who made inappropriate and threatening comments may still be on the job and deployed to silence protesters exercising their constitutional rights," the letter states. "This administration has undermined the First Amendment freedoms of Americans of all races who are rightfully protesting George Floyd's killing."

"The deployment of drones and officers to surveil protests," the letter continues, "is a gross abuse of authority and is particularly chilling when used against Americans who are protesting law enforcement brutality."