Trump mocks Romney's "tanking" poll numbers, even though they show the senator is more popular than the president 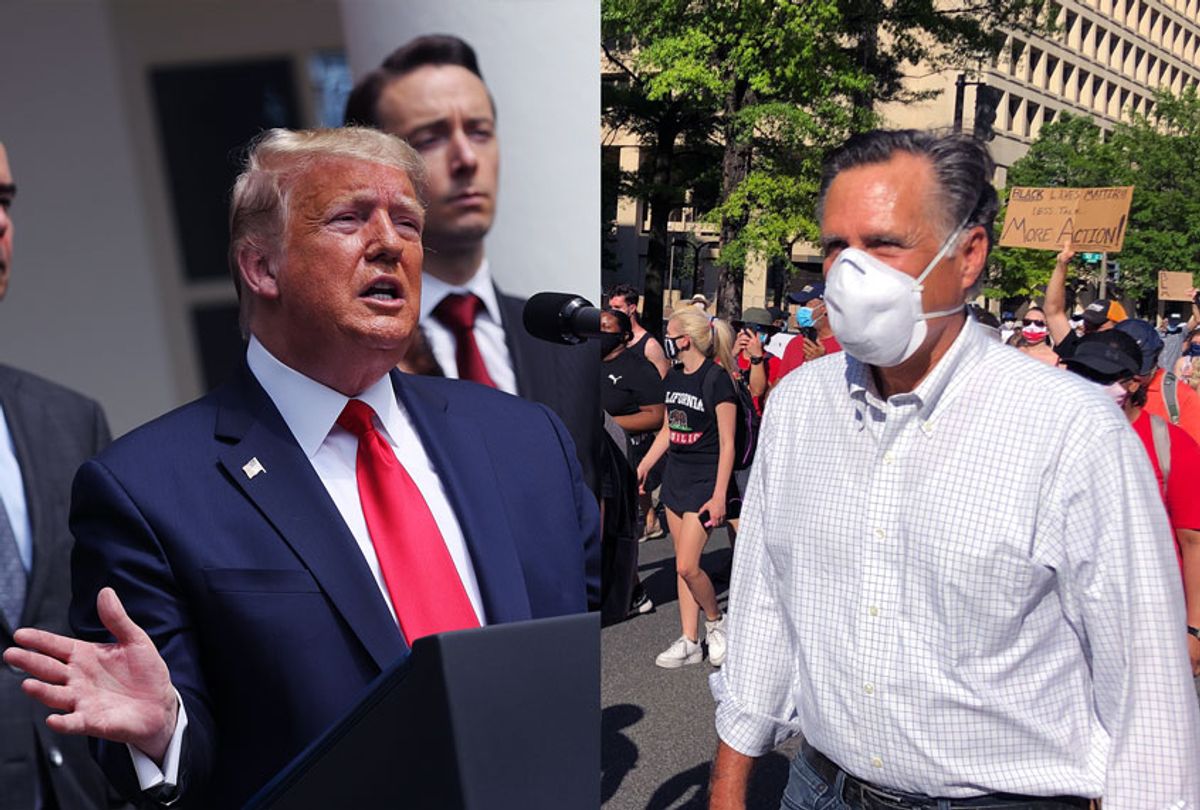 Sen.Mitt Romney marches with a crowd singing Little Light of Mine on June 7, 2020 in Washington D.C. | U.S. President Donald Trump speaks during a news conference in the Rose Garden at the White House (Chip Somodevilla/Michelle Boorstein/The Washington Post/Getty Images/Salon)
--

President Donald Trump mocked Sen. Mitt Romney, R-Utah, on Monday for marching in a Washington protest over the death of George Floyd in police custody.

"Tremendous sincerity, what a guy," Trump tweeted. "Hard to believe, with this kind of political talent, his numbers would 'tank' so badly in Utah!"

The tweet came in response to a video posted by Washington Post reporter Hannah Nathanson. Romney said in the video that he was "marching to find a way to end violence and brutality and to make sure that people understand that black lives matter."

Though Trump mocked Romney's "numbers in Utah," the president's own approval rating has fallen to 52% in the deep-red state, or lower than Romney's 56%. Trump's approval in the state was up to 57% in April before the protests began.

Trump has repeatedly attacked Romney, who opposed his election in 2016 and later became the lone Republican to vote in favor of impeachment.

Romney tweeted photos of him attending the march. An aide told CNN that Romney "spontaneously" joined a group of 1,000 to 1,500 evangelicals for about an hour and a half at the march.

Romney also posted a photo of his father, former Housing and Urban Development Secretary and Michigan Gov. George Romney, participating in a Civil Rights March in the Detroit suburbs in the late 1960s.

"Force alone will not eliminate riots," he tweeted, quoting from his father. "We must eliminate the problems from which they stem."

"No Americans should fear enmity and harm from those sworn to protect us," he tweeted last month. "The death of George Floyd must not be in vain: Our shock and outrage must grow into collective determination to extinguish forever such racist abuse."

"He's going to let the big banks once again write their own rules — unchain Wall Street. They're going to put you all back in chains," Biden infamously told a predominantly black audience during the campaign.

Romney, who refused to vote for Trump in 2016, will not support his re-election this year, according to The New York Times. But Romney is not ready to back Biden, reportedly mulling whether to write-in his wife Ann, as he did last time, or to vote for someone else.

Cindy McCain, the widow of 2008 Republican presidential nominee Sen. John McCain, R-Ariz., is "almost certain to support Biden," the outlet reported. Former President George W. Bush will not support Trump's re-election either. Bush issued a statement last week saying he was "anguished by the brutal suffocation of George Floyd and disturbed by the injustice and fear that suffocate our country."

Trump, meanwhile, has sought to smear peaceful protesters who demonstrated outside of the White House, posting a letter from former attorney John Dowd which called protesters "terrorists."

"The phony protesters near Lafayette were not peaceful and are not real," the letter said. "They are terrorists using idle hate filled students to burn and destroy."

"It is a strength when protesters, protected by responsible law enforcement, march for a better future. This tragedy — in a long series of similar tragedies — raises a long overdue question: How do we end systemic racism in our society?" the statement said. "The only way to see ourselves in a true light is to listen to the voices of so many who are hurting and grieving. Those who set out to silence those voices do not understand the meaning of America — or how it becomes a better place."