No, the left isn't canceling "Blazing Saddles" — but the right wants you to believe that 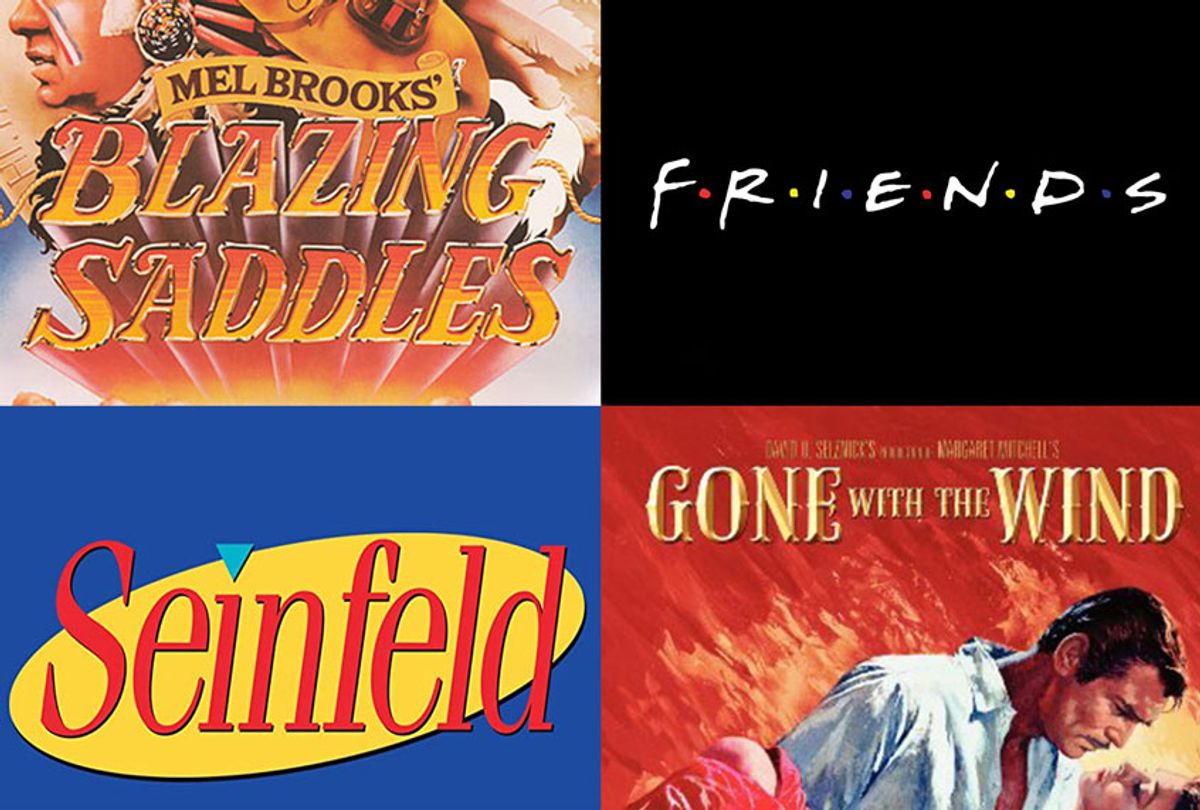 On Tuesday, the new streaming service, HBO Max, temporarily suspended offering "Gone With the Wind", the 1939 Civil War-themed film that is simultaneously both a classic Hollywood movie and a rancid, regressive work that celebrates slavery, glorifies treason and, for good measure, romanticizes rape. The temporary withdrawal came after a Los Angeles Times op-ed by John Ridley, the Oscar-winning screenwriter of "12 Years a Slave," described "Gone With the Wind" as depicting "a bloody insurrection to maintain the 'right' to own, sell and buy human beings" and perpetuating "some of the most painful stereotypes of people of color."

In fact, HBO Max has said the withdrawal of "Gone With the Wind" is temporary, and the service plans to bring the film back soon with an introductory video offering historical context. (And in the meantime, those who wish to watch it may do so through Amazon, Google Play, iTunes, YouTube and other streaming services.) But of course loudmouth conservatives — always eager to play First Amendment martyrs even as they cheer on actual assaults on free speech, such as tear-gassing peaceful protesters so Donald Trump can stage a photo-op without hecklers — have worked themselves into a tizzy about the alleged censorship to which neither they nor the film are actually being subjected to.

Instead of defending "Gone With the Wind", conservatives have bizarrely pivoted to defending "Blazing Saddles," Mel Brooks' satirical 1974 Western that depicts the trials and tribulations of a black sheriff in an all-white town.

Social media was ablaze Wednesday and Thursday with conservative outrage over the supposed censorship of "Blazing Saddles," which was written by Brooks, Richard Pryor and Andrew Bergman and starred Cleavon Little and Gene Wilder. The outrage over liberals supposedly blackballing this comedy classic, which features both fart jokes and anti-racist satire, appears to have been kicked off by Sen. Ted Cruz, the Texas Republican and onetime anti-Trump presidential candidate:

The problem here? Well, for one thing, nobody is actually censoring anything, and no one anywhere is censoring or canceling or even temporarily withdrawing "Blazing Saddles." No one on the left, as far as I can tell — and I spent way too much time digging around on search engines and Twitter looking for shreds of evidence — has even suggested censoring "Blazing Saddles." The entire censorship campaign against this film is occurring in the imaginations of Cruz and his fellow nutbar conspiracy theorists.

(We already covered this, but no one is censoring "Gone With the Wind" either. You can go watch it right now, if that's how you'd like to spend your day! HBO Max has as much right not to stream that movie as they do not to stream "Amos 'n' Andy" or "Small Wonder," the 1980s sitcom about a family with a robot for a daughter, which is not racist but just really terrible.)

Cruz likely got the idea to pretend the "Blazing Saddles" is in the crosshairs from the right-wing website called Hollywood in Toto, whose proprietor, Christian Toto, has claimed that the movie is next for the "woke mob," declaring opaquely, "Cultural observers have had this Mel Brooks classic on their list for some time."

Toto does not, however, quote a single "cultural observer" of any description who has suggested that "Blazing Saddles" should be canceled or censored or withdrawn from a streaming service, temporarily or in any other way.

"Blazing Saddles" is far from the only movie or TV show that conservatives are heroically defending against the hordes of imaginary liberals who are coming for culture with their cancellation shears.

"Let's do this — every episode of Friends needs to go right now. If not, you hate women (& LGBTQ ppl, who also don't fare well on Friends). Obviously Game of Thrones has to go right now. Anything by John Hughes … Woody Allen… could go on & on… & on…& on…," tweeted Megyn Kelly, the former Fox News host whose enthusiasm for creativity does not extend to anyone who depicts Santa or Jesus as black.

But while Kelly could go "on & on", her assumption that anyone on the left is doing any of these things is not borne out by the facts. There is no call to withdraw "Friends" or "Game of Thrones" or even "Sixteen Candles," the John Hughes movie Kelly is clearly thinking about but avoids naming because she knows she can't defend either the anti-Asian racism or the celebration of date rape in the movie. There are no op-eds from woke Hollywood people calling for any of this. There doesn't even appear to be any hyperbolic Twitter chatter Kelly can point at to justify her paranoia.

The lambasting of imaginary liberals with their imaginary censorship has of course already spread to Fox News.

"You know what's going to happen next," declared Joe Concha, a reporter for the conservative site The Hill, declared during a Thursday morning appearance on Fox News. "A show like 'Seinfeld', which was politically incorrect at times, that's going to be gone. And 'Cheers' is going to be gone, because it has mostly an all-white cast."

Um, OK. Except that there continues to be zero evidence of any move to disappear these sitcoms from any prominent liberal voices. There's not even a Twitter egg with two followers that conservatives can cite as evidence that the libs are coming to clamp down on "Cheers."

Even the kinds of right-wingers who don't pretend not to be white supremacists have chosen to flail against imaginary liberal crusades rather than defend "Gone With the Wind." The Twitter account for the white supremacist site VDare (why they get to have a Twitter account is another question altogether) whined: "Black Twitter is trying to cancel Cracker Barrel. God forbid Americans are reminded they once had a country and a culture."

It's unclear how people on Twitter even could "cancel" Cracker Barrel. By convincing people who already avoid it not to eat their dreadful food?

Ted Cruz and Megyn Kelly and Joe Concha and even VDare probably understand that they're setting themselves up to be mocked by liberals for their imaginary war against imaginary censorship. But it's a price they're willing to pay for the larger goal, which is spreading misinformation.

No one is trying to censor "Blazing Saddles," but by defending it against imaginary adversaries, Cruz can get the rumor started that there is an effort to censor "Blazing Saddles." Now he can sit back and let social media and the conservative desire to believe the worst about liberals do all the work. It's already calcifying in right-wing circles that "Blazing Saddles" is somehow or other getting censored, and that's happening without a single liberal or leftist actually saying or doing anything. Hell, by defending "Blazing Saddles" long and hard enough, the right may persuade a few naive liberals to attack it, under the assumption that if conservatives are this fired up about it, it must be a racist movie.

This tactic also allows conservatives to whip themselves into an outrage without having to defend "Gone With the Wind," a movie that literally celebrates the racist violence that Black Lives Matter protesters are currently denouncing. (There's a scene in which a group of white men, including Rhett Butler, wreak havoc on a black neighborhood, an act portrayed as necessary to defend the honor of Scarlett O'Hara. In the book, these characters are explicitly members of the Ku Klux Klan.) It's a neat trick, honestly: Let's pretend to debate a movie no one is attacking in order to avoid debating a movie that even Ted Cruz and other conservatives know is indefensible.

Conservatives know they can't win a debate by arguing that streaming services should be compelled to offer white supremacist propaganda films against their will. They certainly don't want to back themselves into a corner where they need to explain why they're not also demanding that HBO stream "Amos 'n' Andy" or "Birth of a Nation."

Among the many ironies at work here is the fact that if "Blazing Saddles" were made today, the same right-wingers who pretend they are defending it from fictitious censors would be outraged at the film. The plot of the movie — in which the white residents of a small town chafe (at least initially) under the leadership of a black sheriff, even though he's the best man for the job — would read like a direct commentary on how Trump and his supporters reacted to Barack Obama, if the movie hadn't come out 34 years before Obama's election. I won't vouch for every joke in the film by 2020 standards, but it's not exactly subtle in picking its targets, who are the same people furious about Black Lives Matter protests today.

The shameless hypocrisy of right-wingers isn't far below the surface, after all. Witness the unbearably pompous Ben Shapiro, who denounced those who would "Remove all 'offensive' content" on Twitter Wednesday night. This came just two days after Shapiro had ranted about how sports media should censor all anti-racist and pro-LGBT content, and because they declined to do so, "My place of comfort has been removed from me."  For conservatives, "free speech" has always meant their freedom to say whatever racist or offensive stuff they want, while liberals have to shut up about it.

Ultimately, this entire effort to fake a debate over "Blazing Saddles" or "Friends" or "Seinfeld" is an effort to draw public attention away from police in numerous cities who are using tear gas, rubber bullets, batons and other violent tactics to quell protests against police brutality and other forms racist violence. That's the true face of censorship in this country.

Rather than confront their own role in the silencing of legitimate protest, conservatives are resorting to made-up controversies in which they get to play-act the victim of censorship — while cheering on the real thing in especially brutal form. The cynicism of this is as disgusting as it is unsurprising.