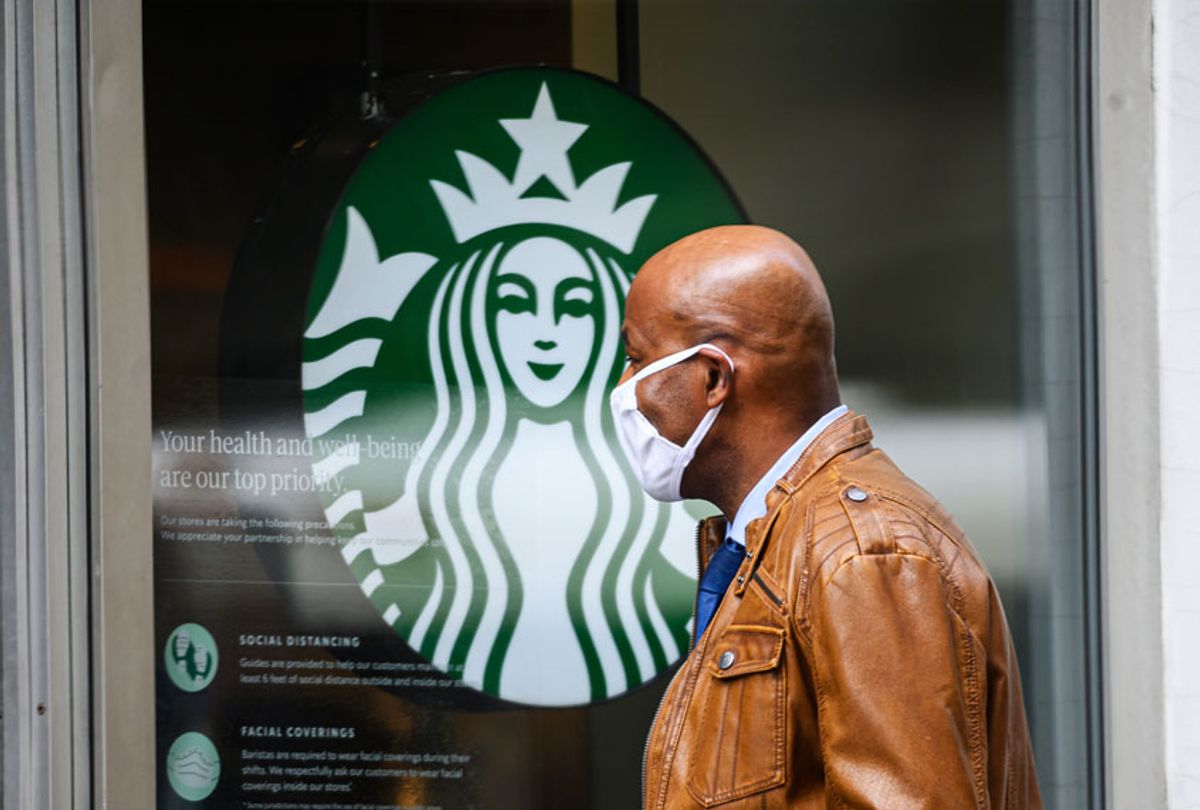 A person wears a protective face mask outside Starbucks in midtown during the coronavirus pandemic in New York City. (Getty Images)
--

Another day, another corporate reckoning.

On Thursday, "Boycott Starbucks" trended on Twitter after BuzzFeed published a report on how the coffee retailer stated its employees were prohibited from wearing Black Lives Matter (BLM) attire because of the company's "dress code policy."

Only a week prior, the coffee giant had issued social media posts expressing anti-racist sentiment. "Black lives matter. We are committed to being a part of change," the company tweeted on June 4, followed by a link to an online course called "Welcoming Dialogue on Black/African American Bias."

The BuzzFeed report referenced an internal memo that BuzzFeed obtained which was written in response to store managers contacting senior leadership on behalf of employees who wanted to wear BLM-related clothing. Management argued that wearing clothing and pins highlighting the BLM movement could potentially incite violence, "affect customer relations," or interfere with the company's public image.

Workers pointed out to BuzzFeed News that the company allowed workers to wear accessories that supported marriage equality and LGBTQ rights. Since June is Pride month, the company reportedly even handed out pins for workers.

"My skin color incites violence at Starbucks. Should I not come to work?" Calvin Bensen, a 22-year-old barista, told BuzzFeed News. "It is silencing and Starbucks is complicit. Now more than ever, Starbucks needs to stand with us."

Some Starbucks workers agreed with the company's position and suggested that the BLM movement symbolizes an anti-police sentiment. A Starbucks spokesperson told BuzzFeed that the company is committed to ending "systemic racism," but the dress code was needed "to create a safe and welcoming" environment.

Starbucks' plan to ideologically "play it safe" in this historic moment only protects the white supremacist attitudes that the BLM movement seeks to dismantle. Clearly, Starbucks didn't intend for this memo to be leaked to the public; rather, they wanted to have it both ways — to have the public who cared think of it as an ally because of its PR rhetoric, while the public who didn't care would not be confronted with symbols of equality while buying coffee.

Starbucks has a long and sordid history with racist incidents. In 2018, a video went viral when two Black men were arrested for just being in a Starbucks (a woman behind the counter called 911; the cops said the men were "trespassing"). The men were later released by police without charges, but not until they had reportedly spent eight hours in custody. Fury circulated on Twitter, especially after Starbucks issued a bland statement of regret. A month later, the company closed down more than 8,000 stories for one-day racial bias training which received praise from former attorney general Eric Holder.

It is worth examining whether this Januslike corporate behavior can survive the new political epoch. Extreme economic inequalities exacerbated by the pandemic, coupled with repeated and unjust police killings, have merged into a larger crisis and suddenly reduced Americans' tolerance for militarized, extrajudicial authoritarianism. The majority of Americans, both left and right, now support police reforms, polls show. Since the function of police in capitalist societies is to protect private property — and since retail corporations are merely large agglomerations of property that they distribute and sell — police are intrinsic to their existence. Corporations need and rely on the police to protect their assets, and they need to preserve respect from the police in order to profit. That simple truth is incompatible with a corporate PR apparatus saying anything radical about police reform.

Moreover, corporate America, Starbucks included, has a race problem to begin with. Black professionals hold 3.2 percent of executive positions and less than one percent of Fortune 500 CEO spots, though they make up around 14 percent of the US at large.

Perhaps unsurprisingly, faith in Corporate America has eroded over the last several years. According to a 2017 Gallup poll, only 21 percent of respondents said they have a "great deal" or even "quite a lot" of confidence in big business.

This latest call to boycott Starbucks comes almost simultaneously to the company's announcement that it is shuttering 400 of its US stores due to the pandemic.