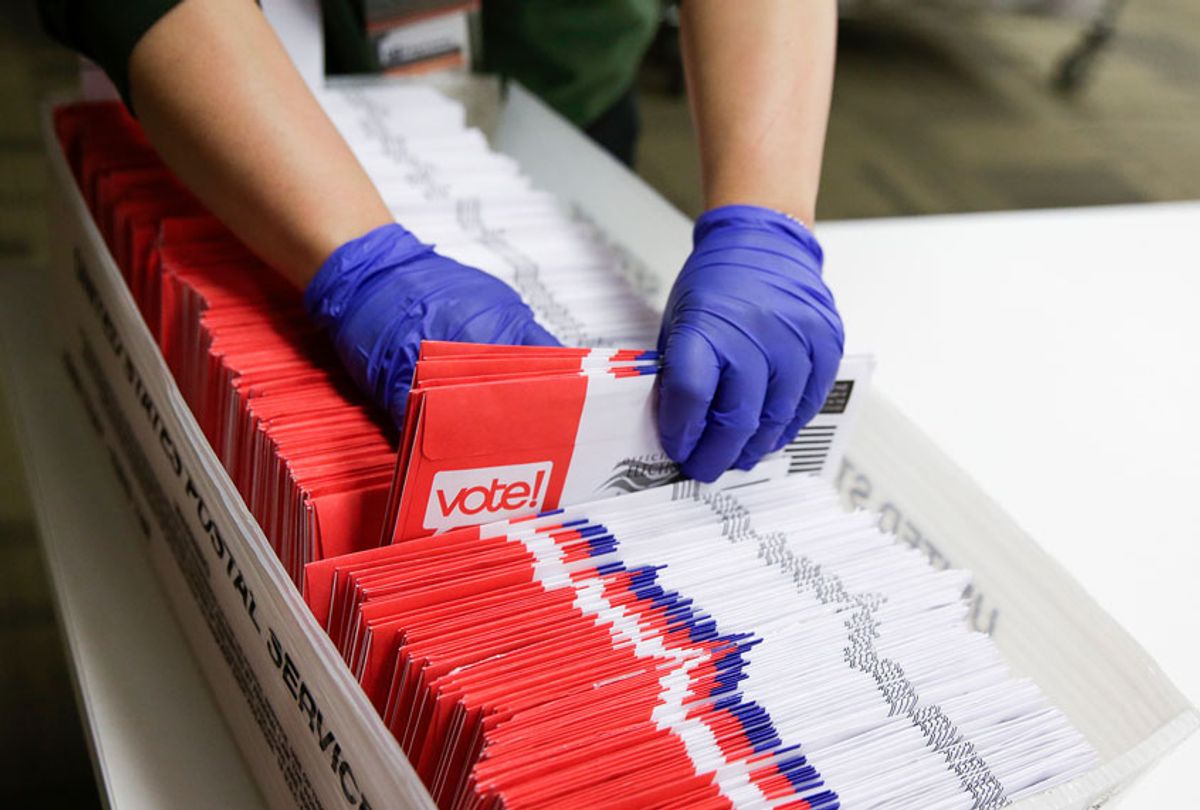 At least half of the states that held primaries last week saw increased turnout after expanding their mail-in voting systems — despite President Donald Trump's efforts to discourage other states from doing the same.

At least four of the eight states that held primary elections last Tuesday saw higher turnout than they did in the 2016 primaries, with most of the votes being cast by mail, according to an analysis of state data by The Hill. Each of the four states sent absentee ballot applications to every registered voter earlier this year.

"The June 2 primaries proved what we already knew – access to absentee ballots increases voter turnout," Tom Ridge, a Republican who served as the Homeland Security secretary under George W. Bush and now chairs the bipartisan group VoteSafe, told The Hill. "That's especially good news for someone like me who does not believe voting is a privilege, but rather a responsibility of citizenship. Voters should have options to demonstrate that responsibility safely and securely during this pandemic."

The numbers could encourage other states to follow suit and mail absentee ballot applications to every voter amid concerns about in-person voting due to the coronavirus. A growing number of states have seen cases spike since Memorial Day.

Trump has led the charge against mail ballots, pushing a number of baseless conspiracy theories alleging it could lead to increased instances of fraud, despite ample evidence refuting the claim.

A Washington Post analysis of data collected by three vote-by-mail states found just 372 possible cases of "double voting or voting on behalf of deceased people" out of about 14.6 million votes cast in the 2016 and 2018 general elections -- a minuscule rate of 0.0025%.

There are also numerous other safeguards in place to prevent fraud and those who are caught are prosecuted.

But a study published by the National Academy of Sciences found that universal vote-by-mail does not favor any one party.

"We find that universal vote-by-mail does not affect either party's share of turnout or either party's vote share," the authors wrote. "These conclusions support the conventional wisdom of election administration experts and contradict many popular claims in the media. Our results imply that the partisan outcomes of vote-by-mail elections closely resemble in-person elections, at least in normal times."

"In my state, I'll bet 90 percent of us vote by mail. It works very, very well and it's a very Republican state," Sen. Mitt Romney, R-Utah, told reporters last month.

California and Montana rely heavily on mail-in ballots and 27 other states already allowed anyone to vote by mail before the coronavirus hit. In the 2018 midterms, about 25% of all votes were cast by mail.

Since the coronavirus pandemic began, a dozen states have loosened restrictions to allow any registered voter to cast an absentee ballot due to concerns about the coronavirus.

Only four states — Texas, Tennessee, Louisiana, and Mississippi — are still fighting efforts to allow all voters to cast absentee ballots.

The Texas Supreme Court ruled last week that concerns about the virus do not qualify as a "disability" under state law, rejecting a lawsuit seeking to expand eligibility. Voters can still self-identify as disabled without having to produce evidence but Texas Attorney General Ken Paxton has threatened to bring criminal charges against voting groups that promote mail voting for those who are not disabled.

In Tennessee, a judge ruled on Thursday that the state violated a previous court order to make absentee ballots available to all voters. The judge ordered the state to comply and threatened officials with the "specter of criminal contempt" if they continue to disregard the ruling. The state is expected to appeal the decision.

The Louisiana House of Representatives rejected a bill that would have allowed anyone to vote by mail last month. The League of Women Voters of Louisiana filed a federal lawsuit after the vote, seeking to expand absentee ballot access.

"With its high transmission and mortality rates, COVID-19 poses a significant risk to in-person voters, especially to those voters at higher risk of severe complications from COVID-19," the lawsuit says. "The pandemic has decimated voter registration drive activity, makes it unreasonably dangerous and burdensome to comply with certain requirements for mail-in absentee voting, and threatens massive withdrawals by volunteer poll workers who justifiably fear contracting the disease."

In Mississippi, Republican Secretary of State Michael Watson has argued it would be "impossible" to implement a mail voting system by November even though other states have not had major issues with their expansions.

For the few states still opposing mail voting, the disastrous primaries in Wisconsin and Georgia could serve as a wake-up call.

Wisconsin's controversial in-person primary in April, which has been linked to an increase in coronavirus infections, saw polling places in Milwaukee slashed from 180 to just five as the state had to call in the National Guard to address a severe staff shortage.

Multiple state and local officials are now investigating the voting issues that caused hourslong lines at Georgia's polling places amid the pandemic. Though the state's new voting machines played a big role, one of the key reasons for the lines was understaffing and a lack of polling places (the state has systemically shuttered more than 200 polling places since the Supreme Court gutted the Voting Rights Act in 2013).

But Georgia should serve as a warning to absentee ballot advocates as well. A huge increase in absentee ballots overwhelmed officials and many voters did not receive their ballots, according to Reuters.

"The vast expansion of vote-by-mail and absentee-ballot voting was not enough to offset the drastic reduction in polling locations in many states," The New York Times reported. "In cities around the country, including Atlanta, Baltimore, Philadelphia and Washington, D.C., voters waited in Election Day lines for hours, even as every city experienced exponential increases in vote-by-mail."

"You have states out there in the West that do ballot by mail professionally; their elections are almost exclusively by mail," Richard Barron, the elections director of Fulton County, which includes Atlanta, told the outlet. "What we were asked to do is do absentee by mail, and we still had to do our full complement of Election Day infrastructure."

Stacey Abrams, who ran for governor in Georgia in 2018, said "the good idea to encourage people to use absentee ballots" quickly became "a disaster."

Other states have experienced issues too. The deadlines to get absentee ballots in Pennsylvania were too short, officials told The Times. Maryland had 20,000 ballots returned because of outdated voter registration lists. In Wisconsin, some mail-in ballots were found undelivered at the Post Office.

Expanding mail voting is crucial to ensuring that anyone who wants to vote can but states have very little time to shore up their systems before November.

"I can't fathom given all that's going on in America right now that anybody would have the gall to stall out and not fix this," Rev. Kobi Little, the head of the NAACP chapter in Baltimore, told The Times. "America can't say 'we're the champions of democracy,' and then not deliver democracy."