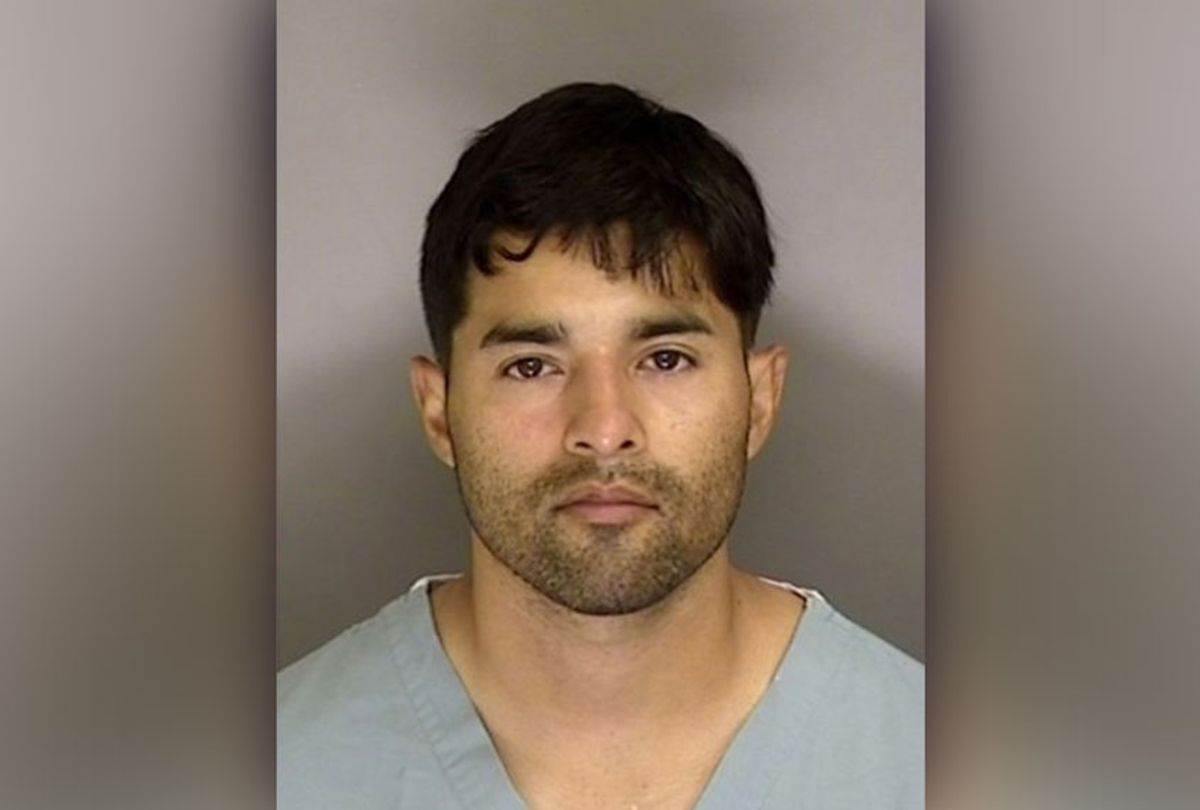 Mugshot of Steven Carillo, US Air Force sergeant with links to the far-right Boogaloo Bois movement has been charged with the murder of a federal security officer in California, the FBI says. (Santa Cruz Sheriff's Office)
--

A California man charged with killing a federal officer and a sheriff's deputy has ties to the far-right "Boogaloo" movement, according to federal authorities.

Air Force Staff Sgt. Steven Carrillo, 32, was charged with killing federal service officer David Patrick Underwood, 53, near a Black Lives Matter protest at an Oakland courthouse on May 29, the Department of Justice announced on Tuesday.

Carrillo faces federal murder charges in Underwood's death, as well as an attempted murder charge after allegedly severely wounding a fellow federal officer at the courthouse. Both officers were members of Homeland Security's Federal Protective Service.

A second man, Robert Alvin Justus Jr., was charged with aiding and abetting after he admitted to serving as Carrillo's getaway driver in the drive-by attack on the officers, according to the FBI. Justus used the phrase "let's boogie," a reference to the far-right "Boogaloo boys" movement, in messages sent to Carrillo, the complaint said.

Inside the vehicles used by Carrillo, police found a patch linked to the "Boogaloo boys" movement, as well as bomb making equipment, ammo and guns, the FBI said. The movement seeks to use peaceful protests as cover to launch attacks in hopes of sparking a race war.

Police also found messages scrawled in blood, which said: "I became unreasonable" and "Boog." Both are linked to the "Boogaloo" movement, according to the complaint. A third message read, "Stop the duopoly."

"They came to Oakland to kill cops," John Bennett, the special agent in charge of the FBI's San Francisco division, told NBC News.

The ambush set off an eight-day manhunt before officers tracked Carrillo down after a man he allegedly tried to carjack tackled and disarmed him.

"Go to the riots and support our own cause. Show them the real targets. Use their anger to fuel our fire. Think outside the box. We have mobs of angry people to use to our advantage," he wrote in one message, according to the complaint.

Carrillo believed the boogaloo, or a second Civil War, was "kicking off now and if its not kicking off in your hood then start it," the FBI said.

Carrillo faces separate state charges in the June 6 killing of Santa Cruz County Sgt. Damon Gutzwiller. He is expected to be charged with the attempted murder of four additional law enforcement officers, according to the Santa Cruz Sentinel.

Carrillo's attorney Jeffrey Stotter told NBC News that "all of these allegations are just that — accusations and allegations." He said Carrillo was a father-of-two "left deeply shaken" by his wife's suicide in 2018. He also told The Sentinel that Carrillo suffered a traumatic brain injury in 2009.

"I am not aware of what impacts these things may have on the case," Stotter said. "I'm simply pointing out that there are more colors to Mr. Carrillo and what his possible motivation and what his involvement is beyond what you may hear simply from the complaint at the worst-case-scenario allegations."

The "Boogaloo" movement is largely organized in online groups but "these people are very serious about their violence," journalist David Neiwert, who tracks extremist groups, told Salon.

"These right-wing extremists want to replace America's constitutional democracy with authoritarian right-wing rule. Online, these right-wing extremists spend a great deal of time talking about the 'boogaloo' and killing federal law enforcement agents. They also fantasize about societal breakdown and killing their neighbors for supplies," he said. "This organizing is being done online on Facebook and elsewhere. Facebook thinks this is fine and has not taken it down."

Carrillo's charges come after the FBI arrested three other "Boogaloo" boys with military experience who prosecutors claim plotted terror attacks surrounding a Black Lives Matter protest in Las Vegas. The three men wanted to attack federal officers and other targets in hopes of sparking mass chaos, according to prosecutors.

President Donald Trump and Attorney General William Barr have sought to blame violence surrounding several of the protests on "antifa," a decentralized anti-fascist movement, despite little evidence of its supporters' involvement. Trump has criticized those who argued that right-wing extremists were also exploiting the protests.

"It's ANTIFA and the Radical Left," the president tweeted. "Don't lay the blame on others!"

But federal charges filed by the Justice Department against protesters thus far show no evidence of any links to antifa.

"Typically, when we're talking about Antifa, which doesn't exist as a group in the way the president imagines, it would make it difficult to associate somebody with a group that doesn't exist as an organization," former FBI agent Mike German told The Daily Beast. "They're imagining something that isn't real. It'll be hard for an agent focused on facts to list it."