The tortured logic of racism: A field guide to the "arguments" against Black Lives Matter protests

The harder it is to deny systemic racism, the more outrageous the pushback becomes 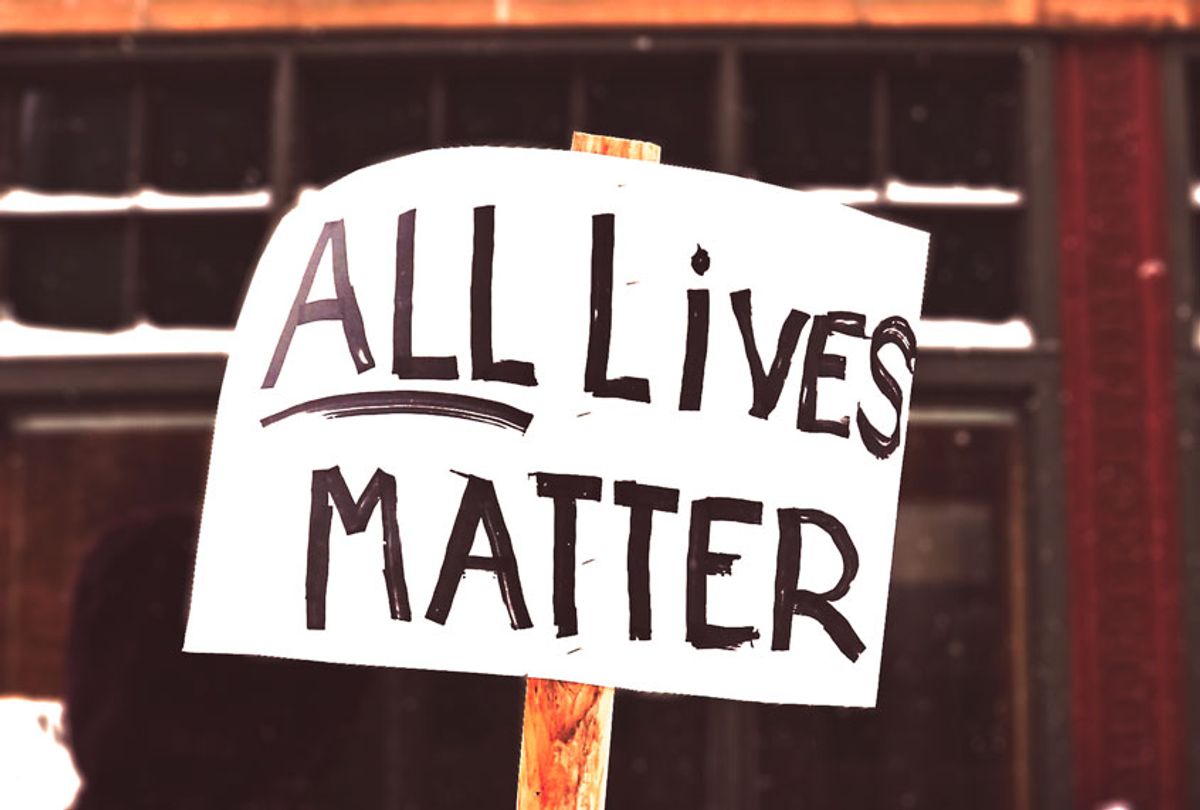 There is little doubt that reactions to the death of George Floyd signaled a turning point in mainstream support for anti-racist activism. For some who had previously sat on the sidelines of the Black Lives Matter (BLM) movement, the stunning cruelty exposed in the series of videos that captured the final moments of Floyd's life was simply too blatant to ignore. Suddenly, new allies like Mitt Romney were out marching alongside seasoned veterans of the movement.

These are encouraging signs. We witness not just the broadening of the base of support for the Movement for Black Lives but also its successes in demanding real policy changes, a feat that has taken far too long to achieve. In example after example, protests have gone beyond the expression of justified anger and frustration; they have led to quick and decisive shifts that hold the promise of change. We have learned that not only has the Minneapolis City Council voted to defund and dismantle the city's police department, but there are no less than 16 other cities considering proposals to divest resources from the police.

And it is precisely due to the movement's successes that we have witnessed an ever-increasing assault on BLM by detractors. There's nothing especially new in the idea that any significant efforts to rectify systemic racism yield a sense of panic and anger among those who refuse to recognize their privilege and their prejudice. What is new, however, is the ease with which these racist backlash rants can circulate, the degree to which they are both public and unashamed, and the attention they draw away from the movement itself.

Take the almost daily meltdowns on offer from Fox News hosts like Tucker Carlson feeding their audiences' racist delusions. In one exceptionally illogical rant, Carlson claimed, "This may be a lot of things, this moment we are living through, but it is definitely not about Black lives, and remember that when they come for you, and at this rate, they will." Have fun figuring out who "they" is in that sentence. Meanwhile, public outcry led to his show losing support from a number of major advertisers.

But here's the thing. Within the circle of Tucker's home audience and following, that rant likely didn't seem outrageous at all — it probably made perfect sense to his viewers. In the twisted algebra of contemporary racism, the more mainstream the BLM movement has gone, the more unhinged its detractors have become. As the logic behind BLM grows in visibility and incontrovertible evidence, it's becoming harder to make counterclaims with any legitimacy, leading opposing voices to lean on flimsy arguments that are increasingly illogical and deranged.

It would be funny to see if it weren't so disturbing. Most importantly, though, it's a reminder of how racism relies and feeds on its own tortured logic.

Here are some top examples.

Almost all racist arguments depend on making things up, twisting the truth, and presenting a warped worldview. BLM has long had to deal with idiotic critiques like "All Lives Matter" and "Blue Lives Matter" which simply miss the point entirely.

But one special subset of making things up is making stats up. Made up stats offer a false legitimacy and they quickly make the racist rounds.

Take, for example, the resurgence of the false stats that Donald Trump got busted for circulating back in 2015. Those completely made up numbers have been trotted out again in recent days.

But the making stats up trend has hit new levels. Check out this doozy: Politifact reports that on June 9, 2020, a Facebook post made the rounds claiming that Martin Gugino, the Buffalo protester pushed to the ground by the police, had been "previously arrested 300 times, 82 times for incitement."

Forget that these numbers are so obviously made up and overblown. What amazes is the obvious awareness, when crafted, that these sorts of posts will gain traction because they include made-up numbers. The original post had 1,200 shares before it was removed from Facebook because it was flagged as misinformation.

False analogies are a common staple in the racist logic arsenal. But recent events have offered up an extraordinary opportunity for this mind game. How many times have you seen conflation of COVID-19 with recent protests? If a governor imposed COVID-19 restrictions, then the very existence of protests against police brutality directed at Black people in their state "proves" that COVID-19 never was a real threat to begin with.

Here's an especially good example: A graphic posted to a pro-Trump Facebook page suggesting "liberal governors" are hypocrites, or possibly even engaged in a widespread Democratic conspiracy, for "allowing protesters to be smashed together like sardines" after shutting down businesses and schools to prevent the spread of COVID-19. "It's obvious that coronavirus was never about saving lives, it was about destroying the Trump economy!"

These false equivalencies claim to offer deep insights, when really, they are just yet another example of the convoluted logic of racist thinking. And, to add to it, these thought patterns are often linked to the next habit — conspiracy thinking.

The best sign you are engaged with a conspiracy theorist is that they won't take long before they mention George Soros or "the deep state" or blame Hillary Clinton for something clearly outside of her purview as a retired politician. If they mention one, in fact, they are likely to mention all three.

Yet, Soros does get special attention. The conspiracy theory works this way: Soros is allegedly paying protesters to riot, he funds antifa and he hopes to convince African Americans to take over America for the globalists. Some even claim that George Floyd's death was a false flag Soros created to cause the protests.

When President Trump tweeted (about the protests), "It's ANTIFA and the Radical Left. Don't lay the blame on others!," former game show host Chuck Woolery disagreed. "It's George Soros," he tweeted. David Wohl, Trump surrogate and father of disinformation activist Jacob Wohl, agreed, saying, "Soros funded rent-a-mobs no doubt." Actor-turned-right-wing-Twitter-pundit James Woods, referring to a "night of savage anarchy" on May 30, wrote that "[when] George Soros rules our streets, we are doomed. #TakeAmericaBack."

Conspiracy theories gain weight not only because they offer framing narratives that console racist mindsets, but also because they state nonsense with such certainty. Never mind there is no proof, they claim, the absence of proof is their proof. Hard to argue with that logic.

Possibly the most painful aspect of racist ranting takes place when a tragically murdered victim then becomes touted as a perpetrator of crimes. The logic is that if someone like George Floyd ever did anything wrong at all, then really there is no reason to mourn him or to prosecute those who killed him, because of course he couldn't be a victim. It's the same thinking that leads to the argument that African-American communities can't be victimized by racist violence if there is any violence within their communities, and so on.

That false logic also lies behind this oft-repeated query: "What about the good cops?" Huh? As annoying and senseless as this tactic is, you have to admit that it is effective because the next thing you know you are drawn into an argument about a racist "what about" question rather than the issue itself.

Whataboutism poses as evidence, when it actually is a mental game designed to distract from the facts at hand and the issues at stake.

When all of those tactics fail, you can expect to see the righteous rant posing as a logical argument. Forget about a recognizable argument to unpack and debate. These rants tend to be incoherent flip-outs that make little, if any, sense.

We can thank Carlson for one of the better recent examples of this tactic. On a recent episode of his show, he gets triggered by the "Sesame Street" episode explaining the BLM protests, and offers a characteristic expression of bewildered outrage in response.

"It's a children's show," Carlson said. "Got that, Bobby? America is a very bad place and it's your fault. So, no matter what happens, no matter what they do to you when you grow up, you have no right to complain. That's the message and it starts very young."

It's hard to follow the logic here — is Carlson suggesting Elmo is unpatriotic for supporting BLM? He also seems to imply that "Sesame Street" is accusing him, or conservatives, or white people in general, of making America a "bad place" and therefore "you" — preschool-aged "Sesame Street" fans? — aren't allowed to complain about any hypothetical bad treatment, whatever that may be, by this unnamed "they."

The key to the righteous rant is that it's difficult to figure out what exactly the ranter is going on about; it's enough that they appear to believe their emotional response is based on rational reasoning.

After Trump teargassed peaceful protesters for a photo op with a Bible, Taryn Manning from "Orange is the New Black" offered yet another example of this tactic, yet hers comes wrapped in the rhetoric of "I just love everyone" and "I have faith in God" but the news about the protests is fake. Even better is her line I "don't 'support trump' as you will all attack me. I support humans."

The good news is that this wave of nonsense has an ever-growing counterculture, which understands that the best way to speak truth to irrational racism is with a healthy dose of sarcasm and snark.

Check out this example where TikTok users @alexengelberg and @rynnstar share a song that shuts down racists who use made-up statistics.

Even better was the mobilization of the K-pop fan base to spam social media in defense of BLM. The Daily Beast reports that K-pop fans took over police apps and racist hashtags, filling them with videos of their favorite dancing pop stars: "They crashed a Dallas police cam app on Monday; they flooded the #WhiteLivesMatter hashtag on Wednesday; and on Friday they came for QAnon hashtags."

K-pop fans are not necessarily known for being politically active, but they are known for their ability to derail social media threads by posting swarms of fancams  — video clips focusing on individual K-pop performers — of their favorite artists. That's why their decision to turn their spamming skills into a political statement supporting BLM is such a great story: Shutting down aggressive white nationalism with slick, upbeat K-pop dance moves and messages of solidarity and support offers a sharp, ironic counterpoint.

The move was not just hilarious, it was backed by a real show of support: Days later, K-pop band BTS donated $1 million to the BLM movement, and less than 24 hours later, their fans matched their donation after spreading the hashtag #MatchAMillion.

So just as racist arguments against BLM grow even more absurd, the public backlash against them goes even more widespread.