Reveal the kraken: A rare, intact giant squid is discovered on a South African beach

Sightings of giant squid are very rare; the massive cephalopod is believed to be the inspiration for the Kraken 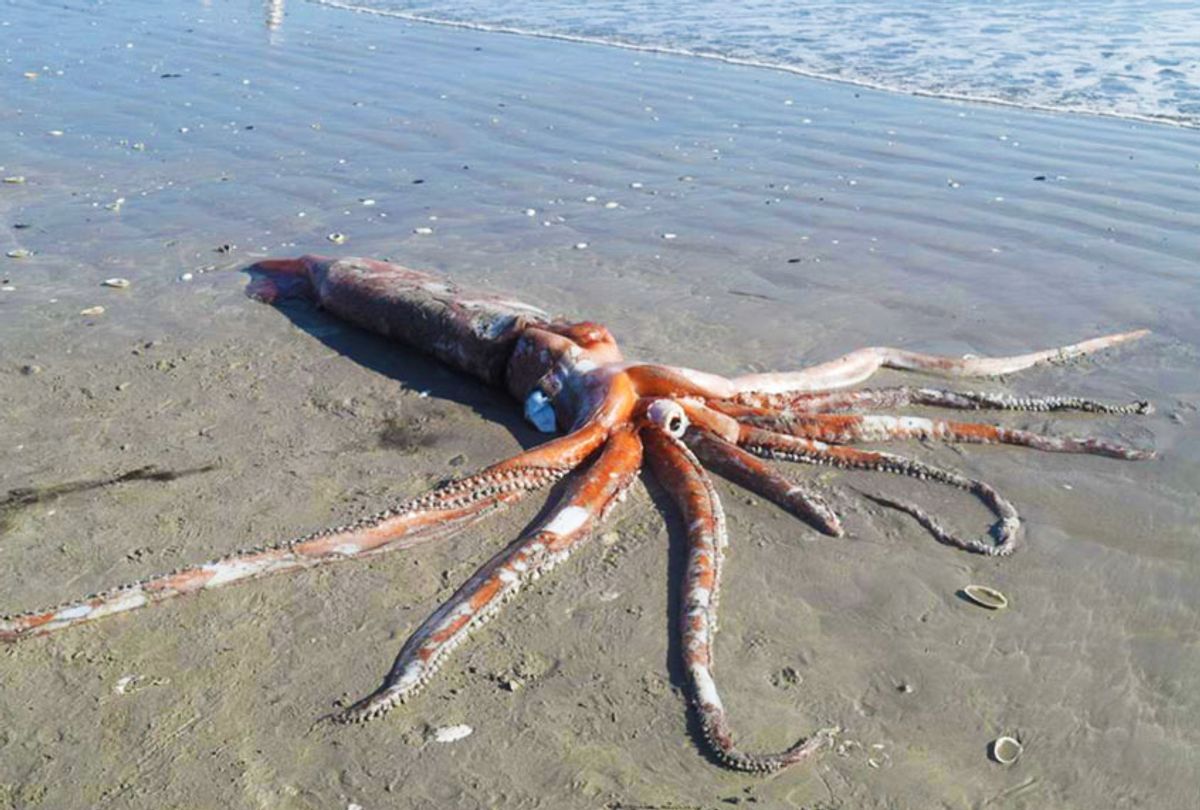 A dead giant squid washed ashore at a beach in South Africa earlier this month, offering fans of the elusive cephalopod a rare opportunity to see photographs of an intact specimen.

The discovery is particularly exciting given how rarely giant squids have been observed intact and up close by humans. Despite a half century of attempts, humans have never successfully captured a live specimen, and the dead specimens that wash ashore are usually partial. The first-ever video footage of a giant squid in its natural habitat was captured just  seven years ago, in 2013.

Adéle Grosse of Cape Town told Live Science that when she saw the large tentacled sea creature on the beach, her initial instinct was to try to save its life.

"At first, I just wanted to get it back into the ocean. [But] on closer observation, one could see that it was dead," Grosse explained. She explained that she and her husband discovered the beached giant squid during a morning walk in Brittania Bay and that they were taken aback by its appearance.

"Oh my word, seeing it at first really took my breath away. Honestly, it looked like a majestic prehistoric animal," Grosse told Live Science. She is unsure how it died, although she noted that "we had big swells the night before, and it was my understanding that the swell washed up this beautiful squid onto the beach in the early hours of the morning. We looked for bite marks or injuries and could not really find anything."

Wayne Florence, curator of marine invertebrates at Iziko Museums of South Africa, is now in possession of the squid and plans on studying its DNA and anatomy after the coronavirus lockdown ends in their country.

Giant squids were in the news recently after an indirect sighting reported earlier this month by Florida International University marine biologist Yannis Papastamatiou, who found that an oceanic whitetip shark had been photographed with tentacle-sting markings on its body that likely came from a giant squid. The shark, which was photographed by underwater photographer Deron Verbeck in Hawaii, had a series of dots and circles on its back that appeared to be battle scars from an encounter with a giant squid in the ocean depths.

Giant squids have captured the public imagination for millennia, with tales of giant squids attacking ships appearing as far back as the days of the Vikings. One famous account of what may have been an encounter with a giant squid was recorded by the famous Roman naturalist and philosopher Pliny the Elder. In the first century AD, Pliny the Elder wrote of a "polypus" that was "enormous beyond all conception" and "exhaled a most dreadful stench." He also claimed that "there is not an animal in existence, that is more dangerous for its powers of destroying a human being when in the water. Embracing his body, it counteracts his struggles, and draws him under with its feelers and its numerous suckers, when, as often is the case, it happens to make an attack upon a shipwrecked mariner or a child."

The species is distinct from a colossal squid, for which it is often confused.

The giant squid is also believed to be the inspiration for the kraken, a mythological creature which in Norse sagas resided near Norway and Greenland and would attack sailors.