Failure and the five o'clock shadow: Teaching my 11-year-old son how to shave

The fuzzy front end of puberty is the start of becoming a capable man, and figuring out what that means to a father 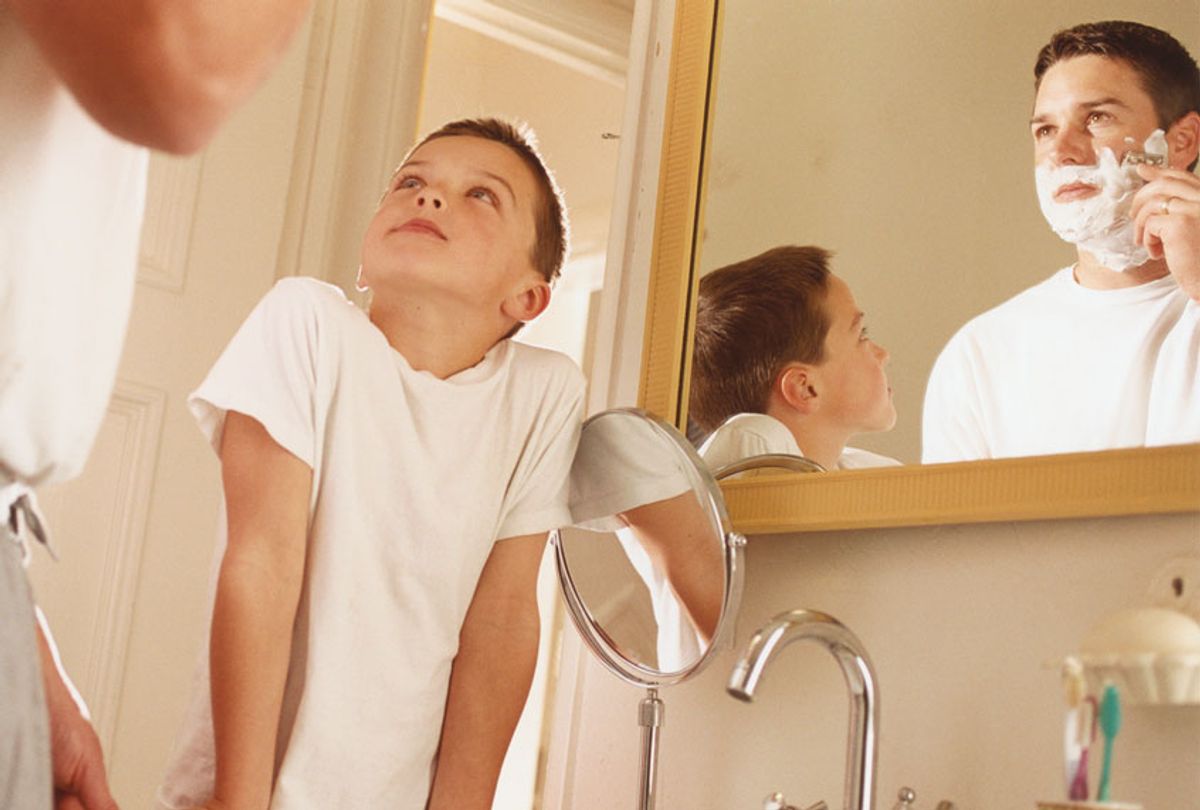 This winter I bought my 11-year-old son an electric shaver. He's an early bloomer. He hit puberty ahead of his peers, and although my purchase was practical and timely, it didn't involve a lot of planning. It was something I did on my iPhone, on Amazon, on autopilot. The package arrived in two days. It symbolized my failure as a father.

It also laid bare a central tension of parenthood: the desire to recreate experiences of our youth, good and bad, while sparing our children from making the same mistakes — and needing to figure it out fast, on the fly, much sooner than most of us would have guessed.

Outward changes like facial hair and smelly feet often trail the actual onset of puberty, which now commonly begins in boys around nine or ten years old, a milestone lost on most parents and often the boys themselves, according to Dr. Cara Natterson M.D. in "Decoding Boys: New Science Behind the Subtle Art of Raising Sons" (Ballantine Books, 2020). "Their early puberty is essentially invisible to the outside world," she writes. By the time you teach your son how to shave, he might already have multiple years of puberty under his belt — and in his brain — with testosterone levels of an adult male.

My father was a Norelco man. Three rings of rotary blades with a rechargeable grip. He gave me the same model in middle school. A gift on the morning of my confirmation from St. Mary's Church. Shaving, of course, is its own kind of sacrament. It's one of two very important things boys at that age learn to do with themselves in the bathroom.

For Catholics, confirmation is the moment you put away childish things and stand as an adult before the eyes of the almighty. And, like a grown man, I immediately understood one thing. You don't need to read the instructions.

You plug it in, and turn it on.

In other cultures, beard-trimming is celebrated as a rite of passage. In suburban Connecticut, nobody noticed any elevation in my status. If anything I must have looked less mature after applying the new shaver to my upper lip, shearing away the shadowy fuzz, and with it, all evidence of pubescence.

Childhood passed. The encroaching shadow on my cheeks thickened to patchy scraggle. I've got fair skin and Irish stock, but eventually my beard-growing potential put me in a class with Karl Marx, Mark Twain and the Taliban. Every morning the shaver hummed the same tune, louder and louder, mowing down a field of iron filings.

My stubble grew rough, sharp, mean-spirited. It was capable of scratching raspberries across the chins and cheeks of sensitive girlfriends. One woman, who was seeing another man, came home and told him she'd fallen on her face after a night of drinking.

You can't get close with an electric razor. The blades never touch the skin. For the well-whiskered, a wet shave with a manual razor is the one true path.

I didn't figure that out until after college. The first lesson came watching "Miller's Crossing," a gangster movie about a righthand man with left-handed loyalties, Tom Reagan, played with hangdog perfection by Gabriel Byrne. The Coen brothers lay out a few lines of advice as Italian mob boss Johnny Caspar hectors his driver on his way to an ambush.

"Ya put the razor in cold water, not hot," he says. "Because metal does what in cold?"

"At's what I'm tellin' ya. It contracts. That way you get a first class shave. Every time."

Johnny Caspar walks into a building. He doesn't walk out.

I found myself wishing he'd survived the double-cross in the next scene — the surprise of a small-caliber crack! crack! — so he could finish his clinic on male grooming.

Today is a golden age in the eternal campaign against five-o'clock shadows. It was a long time coming. The Gillette Company introduced its Mach3 in 1998, claiming to break the "performance barrier" by stacking three blades into a single cartridge. Five years later, in 2003, Schick came battling back with its four-bladed Quattro, only to be bested again by Gillette with the Fusion5 in 2006. Back and forth, these two brands dominated the market for decades, and their monopolistic prices made the merchandise increasingly attractive to thieves, forcing drugstores to lockdown the shaving shelf. For anyone sick of wrestling with anti-shrinkage security tags, the situation improved a few years ago with the advent of Dollar Shave Club and its Korean-manufactured mail order models. (Yep, six blades.) The next consumer-friendly disruption came from Harry's, with inexpensive subscription plans for German-engineered blades ground with a gothic arch, steel sharpened on both sides to a parabolic edge. There has even been a revival of old-fashioned straight blades, the cutthroat kind that require honing and stropping, a fetish of self-care and suicidal-ideation for guys with too much time on their hands.

Shaving, really, is a simple ritual. You run the sink hot until it steams. Bend low and bring cupped palmfuls of warm water to wash your face. Next apply the cream or gel, foaming up your neck and cheeks. Hold the blade under a tap of cold water, just like Johnny Caspar. Then drag the razor flat across the contours of your face, moving with the grain to the jawline, clearing the lather in slow steady strokes like a snowplow. If you have rough stubble, you might need a second pass with more cream, cutting against the grain.

Why did I buy a Norelco for my son?

"I dunno," muses Tom Reagan in "Miller's Crossing," after putting a hit on his boss. "Do you always know why you do things?"

As a father, I find, there is a tendency, maddeningly, to automatically repeat the same lessons you learned in childhood, as if by rote, even if after you have come to realize they were – not necessarily wrong-headed, or traumatic, but simply deficient. Not right for you.

As a culture we appear to have exhausted our critiques of helicopter parenting, moms and dads hovering inside the perimeter of the playground, tracking their child in a chaotic flightpath like hummingbirds. This level of hyper-vigilance has been widely and justifiably mocked, but after the #MeToo reckoning and all the sordid details of young men behaving badly (and worse than badly), it's clear you can't afford to wait until Beach Week to find out if your son is somewhere on the spectrum from Brett Kavanaugh to Kevin Spacey. Getting involved early, and remaining available, makes a lot of sense. It's a moral argument seemingly so obvious, in fact, Proctor & Gamble slipped a similar message into Super Bowl LIII with a Gillette commercial urging men to set a better example for their boys by blatantly rejecting all manner of toxic masculinity: bullying, harassment, discrimination, sexual assault, and lame excuse-making. This controversial bid for corporate wokeness triggered an angry backlash with complaints that men were now being "gender shamed." Six months later, Gillette waded back into the cultural conversation with a new ad featuring a dad teaching his transgender son how to shave for the first time. "Now don't be scared," his father says. "Shaving is about being confident."

Traditional models — and, certainly, many familiar examples — of fatherhood involve degrees of domestic absence and abdication. We're not necessarily hardwired with bad code, but certainly the signals feel conflicting, and there's a perceived risk of cascading failure. Perhaps believing your children need to build character so they can, one day, overcome greater challenges on their own, you pull back early and maintain your distance. Your toddler learns to stand, and fall, and stand up again, while you observe from the sidelines, cradling a cup of Starbucks or a beer cozy. Later your teenager learns to shave with a Norelco, because it is convenient, and requires no real instruction. Because your father bought you one at that age.

"Do you want to learn how to use a razor?" I asked my son the other day.

He gave it some thought. A beat, maybe a beat-and-a-half.

"I don't really need to right now," he replied.

Later in life, perhaps he'll have his own conversion. Electric to acoustic, like that seminal Bob Dylan moment, in reverse. Preferably without a pissed-off British fan yelling "Judas" after he toggles the juice.

Teaching your son how to shave should be simple. Manhood is another matter. If you can't properly prepare and equip your son in the fight against facial hair, what comes next is not going to get any easier.

As my son would say: Good luck, I guess?

John Powers lives with his wife and sons in the Hudson Valley of New York, where he runs a private investigation agency specializing in fraud and financial crimes. His essays have appeared in Wired, Huffington Post and The New York Times Magazine. Follow him on Twitter @johnpowerspi