Among a buffet of cooking shows on TV, this wacky one featuring Carla Hall is worth a taste 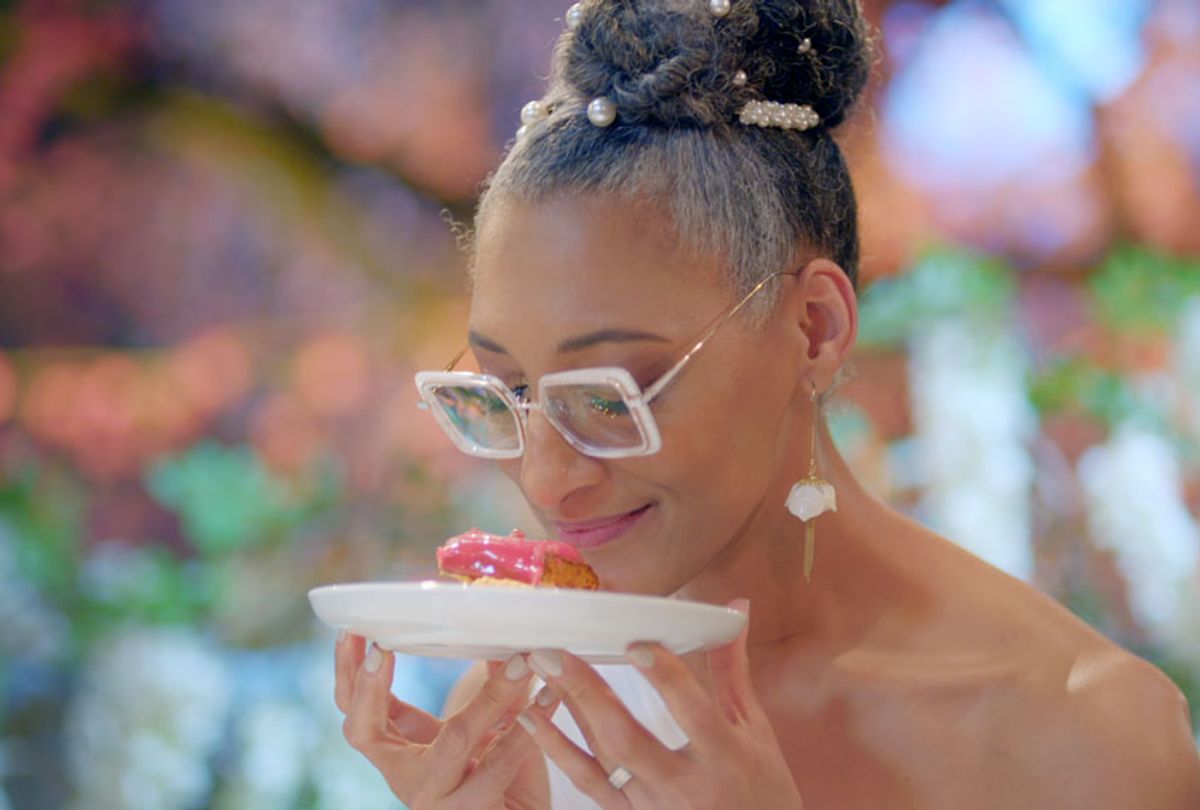 Netflix's latest cooking competition addition is like "Chopped" layered on top of a Willy Wonka fever dream. In "Crazy Delicious," three contestants enter a garden where almost everything is edible. The stones? Made of chocolate. That tree bark? Colored, crystalized sugar. Any ingredients needed for their dishes? They're available for foraging (cheese literally grows on trees!), all under the glow of strings of fairy lights.

Under the watchful eyes of three Food Gods — English chef Heston Blumenthal, Swedish chef Niklas Ekstedt, and American chef/TV personality Carla Hall — who judge from a Grecian pedestal dressed in all white, the home cooks battle it out over three rounds.

The first round is dedicated to a single magic ingredient, like bananas or mushrooms. In the second round, they tackle an update on a well-known comfort food, like a grilled cheese sandwich. The last round is "The Final Feast," where the cooks present their most elaborate themed dishes to the judges.

But this is no ordinary cooking compeitition series. Instead, the clue for the show's playful premise is in the title, "Crazy Delicious." Innovation is central to each round, whether that comes from updating existing recipes by fusing unexpected cuisines, or by experimenting with unusual flavor combinations and techniques. Sometimes this isn't totally successful — like when a contestant mixes chocolate and smoked fish, or when another decides to integrate the elements of a grilled cheese into a vegan smoothie bowl.

But when it works — like a fried spam musubi and tomato dip as a play on a grilled cheese and tomato soup — it's inspiring, especially for food lovers at home. I don't want to spoil too much of the show, but after watching I'm now inspired to jerk-marinate an entire grilled watermelon, thus disguising it as a ham; I may also need to build a terrarium to use as a vessel for serving dessert.

It's whimsical enough in premise to stand out from the similar three-round cooking programs that have saturated the food competition landscape over the last decade, but is still formulaic enough to serve as a soothing binge, much like "The Great British Bake Off."

"Crazy Delicious" also separates itself from other food television by virtue of the talent the program has attracted. From the judges' side, Blumenthal is a chef whose restaurant, Dinner with Heston, has been named one of the World's Best Restaurants; Hall is a multi-talented cookbook author, former "Top Chef" contestant and host of "The Chew"; Ekstedt is a Michelin-starred chef.

Together, they offer thoughtful and relatively snark-free criticism, while also hamming it up for their new, godly roles — swirling white capes, making entrances to a thunderclap soundtrack, and the like. My favorite new bit of gentle judge feedback comes from Blumenthal. Any time he is presented with an obviously failed dish, he counters with a thoughtful, "Are you pleased with this?"

The cooks featured on this show are mind-blowingly talented, too. None of them are professional chefs, (though many work in food as bloggers, writers, or food Instagrammers), but after being told to "Go forth and forage," they use the garden as an opportunity to showcase their creativity.

Grounding this fantastical display is host Jayde Adams. The British comedian's dry, cheeky humor offers a little salt in the otherwise saccharine settings, and her rapport with the contestants is effortless. "How did the burger introduce his wife?" Adams deadpans to the audience during a burger round. "Meet Patty. Also a good name for a drag queen."

"Crazy Delicious" isn't flawless — the pacing can stutter a bit over the hourlong episodes, especially during the periods of time the cooks aren't actually cooking — but I appreciate how the love of food, rather than contrived drama, takes centerstage. This is a show where both creativity and execution are rewarded. Among a buffet of other options, "Crazy Delicious" deserves a spot on your plate. As Adams would say, "Smash it out, babes."

The first season of "Crazy Delicious" is now streaming on Netflix.