Beyond flashy big names, "The Politician" showcases how voters are bamboozled, swayed, and disgusted

Ryan Murphy's Netflix drama about a boy who would be president has little substance, save for two episodes 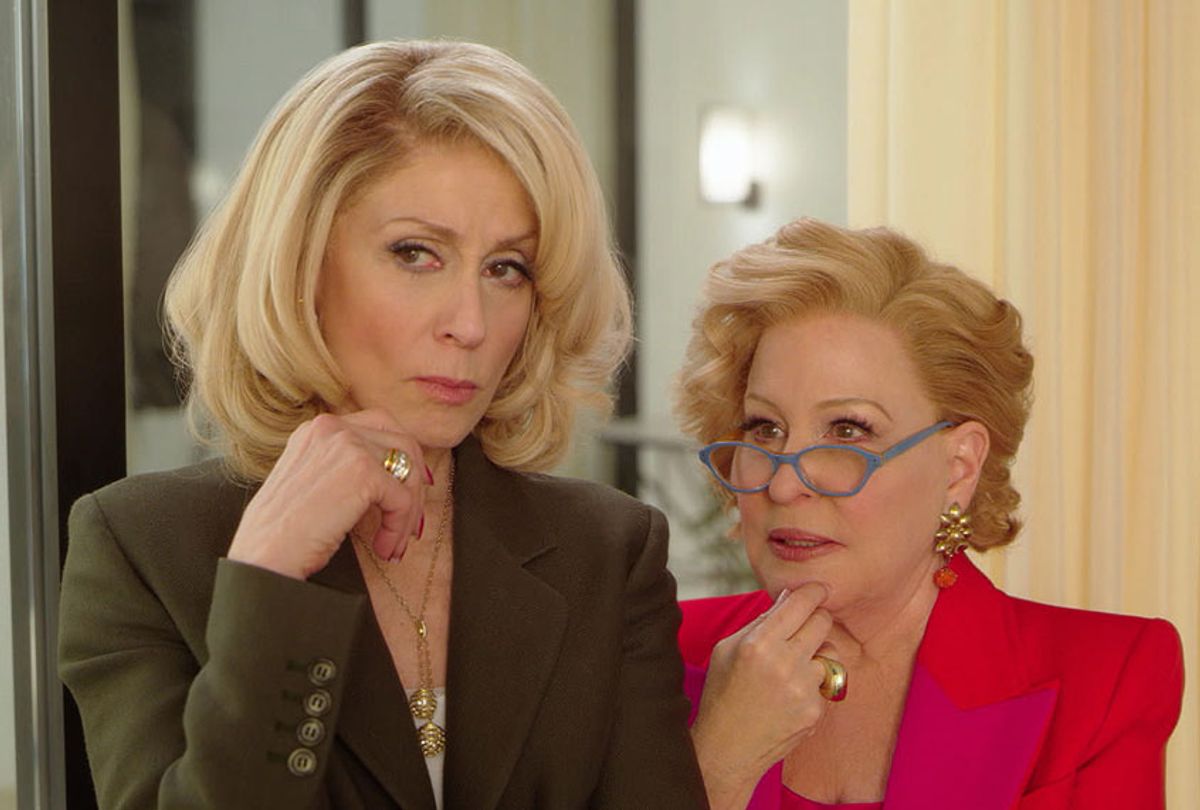 Judith Light and Bette Midler in "The Politician" (Netflix)
--

Politics is theater. Candidates strive to drop all the right zingers, nail the right photo ops, sit down with the right interviewers and wear exactly the right shade of whatever, all in the name of earning likability points with viewers. Backing the platforms of key constituencies is vital too, of course, but what really counts is the acing the so-called "beer test" – as in, "Would I want to sit down and enjoy a frosty mug with this person?"

"The Politician" isn't much of a beer drinker's show. It's not even really about politics, even though the title character declares his eventual candidacy while he's still in high school. I'd even go so far as to posit that it barely has a reason to exist save for being a vanity piece for its creator and executive producer Ryan Murphy and a showcase for Gwyneth Paltrow's stunning ability to wear the hell out of chunky rings set with raw crystals.

Except, that is, for two episodes that actually say something about voters in America. Not voting, voters.

The episodes in question are Season 1's "The Voter," referring to a pimply-faced kid named Elliot (Russell Posner), who attends the same high school as the ambitious Payton Hobart (Ben Platt), and "The Voters," referring to Andi Mueller (Robin Weigert) and her daughter Jayne (Susannah Perkins), a New York family on opposite sides of the political fence in the election that the second season covers.

The stakes are nominally higher in this new season because instead of running for president of his high school, Payton, a novice to running for public office, sets his sights on a State Senate seat – one long held by veteran New York State Senator Dede Standish (Judith Light), whose career has been kept on the right track by her devoted adviser Hadassah Gold, played by Bette Midler.

If processed the above grafs like so – "blah blah Ryan Murphy guh guh Gwyneth Paltrow, OK, rah bah bah bah – wait, Bette Midler and Judith Light are in this thing?" – stupendous, then. That is more or less the proper response and amount of attention one is obligated to invest in the plot.

That said, Murphy and fellow series creators Brad Falchuk and Ian Brennan do take enough liberties with the series' already very loosey-goosey storylines to amplify the ridiculousness sprinkled throughout the first season. We meet Dede and Hadassah for the first time in the season finale, when it's also revealed that she's in a throuple with two men.

In Season 2 Paltrow's effortlessly elegant Georgina, Payton's mother, finds a new purpose in running for governor on the bold platform on having California secede from the United States. Georgina is so likable that she not only gets away with such a wild swing but captures national headlines to the point of diluting her son Hobart's state Senate campaign clear across the country.

And this irritates Payton's staff of high school friends James (Theo Germaine) and advisor McAfee (Laura Dreyfuss), his girlfriend Alice (Julia Schlaepfer), and former rivals/frenemies Skye (Rahne Jones) and Astrid (Lucy Boynton) to no end, setting off a chain of in-fighting in addition to slinging mud in Dede's direction.

Payton, by the way, is still seeing and hearing the ghost of his lover River (David Corenswet), which proves less of a problem than the throuple he eventually enters into. Yes, committed polyamory figures heavily into these new episodes, along with references to spicy lube, unappetizing uses for grey water, and – this being about politics – backstabbing, betrayal, and yelling.

But all of it is costuming, as one might expect of any series that places Paltrow, Midler, and Light into the same general area, winds them up and lets them go. The gloss of "The Politician" may not compensate for its overall shallowness or the messy pointlessness of its plot, but it does remind us of celebrity's power to persuade us to make foolish decisions, including with our time.

Payton, his team and their political adversaries take enormous interest in Elliot once they realize he is an undecided voter, and throughout the day we spend with him we see him growing increasingly annoyed and pulling further away from the election whirlwind tossing everything around him into disarray. He watched a Black classmate be turned away from voting because she doesn't have an I.D., for example, and does nothing. He squirms as each candidate's surrogate pitches him. In the end, he's so fed up he doesn't vote at all, mumbling to his parents that it doesn't count anyway.

Set against reality's politics, Elliot's character embodies the overall ennui politically active people fear will doom us to another four years of chaos and pain . . . which remains a possibility. Watch it back to back with "The Voters" and one gets the sense that "The Politician" might have been more effective as a series of vignettes about everyday people tasked with the decision of who gets to hold office and therefore power over the collective welfare of a body of people – here, the state of New York.

And in "The Voters," the conflict is generational. Weigert's Andi is a longtime Dede Standish supporter and a champion of the status quo with a proven track record of getting just enough done. Her daughter Jayne is seduced by Payton's declared devotion to environmental conservation, the one issue she cares about.

Importantly, both of them are insufferable in their own right: Andi is inclined to write up the kid with zero political experience, happy to stick with the woman who ensured the summer camp her privileged child attended had Epi-pens and banned garbage trucks from parking outside her their nice apartment.

To which Jayne scoffs, "OK Boomer."

As wealthy and condescending as mother and daughter come off to the audience, they're also equally bamboozled by the candidates they're backing. Dede and Hadassah stoop to impressive lows to tank Payton's candidacy in reaction to his camp forcing Dede to out her relationship status, which Andi sees as evidence as Dede's dishonesty.

"Payton Hobart is a genuine man of character who actually cares about this planet!" she trills at her mother. But then, she says this not knowing what the audience does, which is that in a previous episode's scene Payton re-commits to his political determination by assuring his allies that he'd burn the world to the ground, and that his environmental posture is one of political convenience.

Neither Dede nor Payton are completely in this game to serve people – not at the point of the season when "The Voters" runs. (It's the fifth of the second season's seven episodes.) Nevertheless, it does resolve on an optimistic note weighted with realism, one buoyed by the expectation that somehow – locally anyway – the system (as it is imagined by Brennan, who wrote and directed this episode) can still work devoid of any circus-like shenanigans. And when such wrenches do drop from the sky, we find out it would have worked anyway.

Style-wise "The Politician" belts a Broadway melody of fantasy and dreaming, pushed along on a strong current of dry wit and fabulous fashion. This describes surface details which is, really, most of what there is to describe with a show that tasks its actors with vamping in tap shoes on a plot that's truly vellum thin.

These episodes feel substantial in comparison because they hook themselves into the mundane world, whether it's Elliot's disillusionment, Jayne's frustration at the older generation's inaction to preserve an increasingly perilous-looking future, and Andi's outrage at her daughter's refusal to acknowledge the sacrifices and gruel efforts made by generations Millennials and Zoomers increasingly view as selfish and out of touch.

Season 1 of "The Politician" left open the question of what the series is truly about – other than Payton Hobart's ascent, that is. I'm not sure the second season sufficiently answers that question. If Payton's story is supposed to be all there is to see, there isn't much to analyze about what the series has to say. To view the entire anthology surrounding these two episodes as accoutrements to the messages they leave us with doesn't make much of an argument for supposed profundity either, hidden or otherwise.

At the very least, "The Voter" follows a view that is increasingly preached as we head toward the most uncertain November election in living memory, which is that taking responsibility for the long health of a society should be what drives us to the polls and influences our vote, not our fandom or a candidate's showmanship, which is what got us where we are right now.

Two seasons of "The Politician" are currently streaming on Netflix.