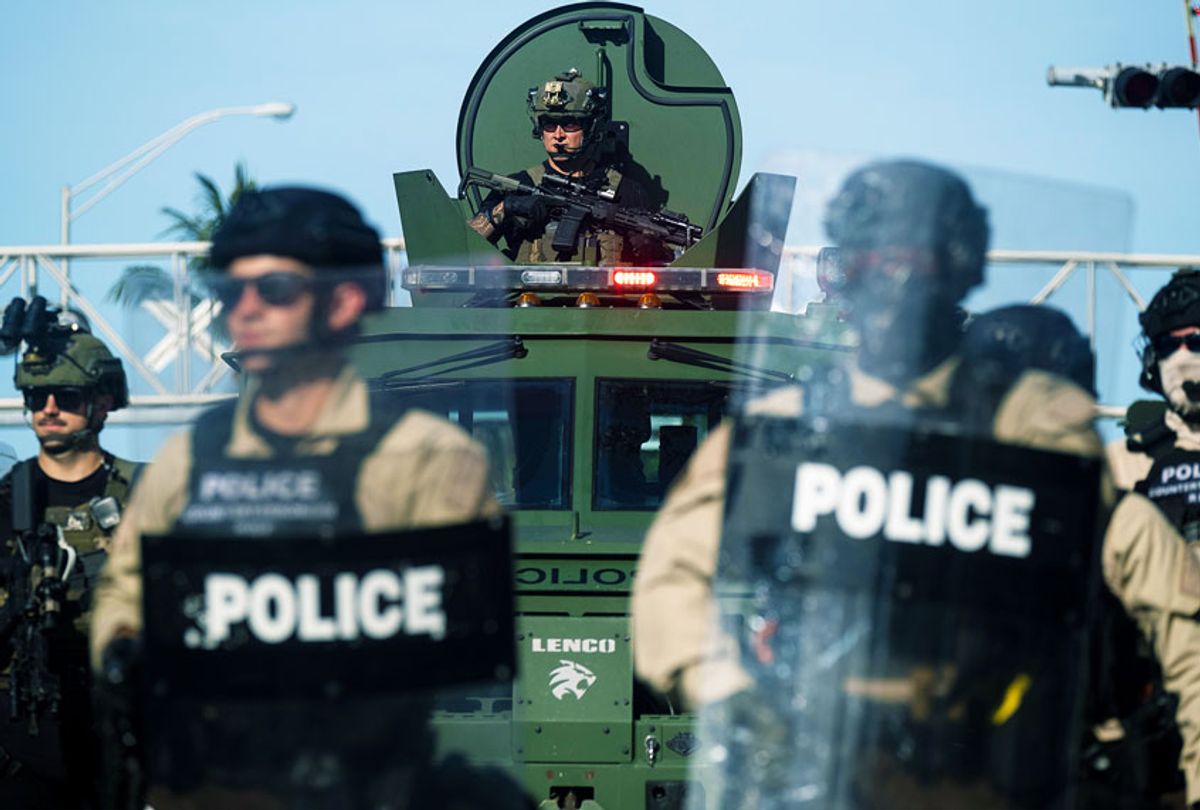 A Miami Police officer watches protestors from a armored vehicle during a rally in response to the recent death of George Floyd in Miami, Florida on May 31, 2020. (RICARDO ARDUENGO/AFP via Getty Images)
--

Police unions have emerged as the leading opponent of reform efforts as lawmakers respond to weeks of protests over the police killings of Black people across the country.

Despite years of demonstrations against police violence, data shows that law enforcement agencies killed more people last year than they did five years ago. Black people are killed at a far higher rate than white people.

The rise comes even as violent crime has plummeted across the country for decades. Despite the falling crime numbers, America's policing budget has nearly tripled over the last 45 years.

Looking at the historical data, researcher Lyman Stone, a former federal economist who now serves as a fellow at the conservative American Enterprise Institute, found that police killings mostly fell between the 1960s and the 2000s but have been at high levels ever since.

"The pace of increase has been especially dramatic since 2002," Stone wrote. "This calculation shows the frequency of police killings has risen by much more than criminal or terrorist violence, which suggests that rising police violence is probably not a response to rising criminal violence."

FBI data also shows that the number of killings of police officers has declined.

"Police killings have risen, but this rise is not driven by reported officially justified homicides, nor is it associated with a larger share of police killings involving armed victims," Stone wrote. "Instead, what we've seen is a rise in police killings across the board, untethered from actual threats to society, with the victims often being unarmed innocents. About 15 to 25 percent of police killings are of unarmed people."

Stone pointed to police unions as a key reason for the rise.

"Police unions… cause higher rates of police killings by shielding bad cops from discipline," he wrote. "Unlike other public sector unions, police unions have military-grade equipment they can use to violently crush protests against their abuses, and they are legally immune from most consequences."

Stone argued that "tinkering around the edges" with reforms will not fix the fundamental problem that "police are almost impossible to discipline."

"In order to tackle the problem of excessive police violence, reformers will need to attack the system itself: an end to qualified immunity, complete obliteration of collective bargaining and unionization for police, and reduced provision of military-style weapons and training provided to local police forces," he wrote. "Without stripping the police of the political leverage that protects them from punishment, and the equipment that convinces peace officers that they are soldiers at war, no other reforms are likely to yield durable effects."

The argument made by Stone, a conservative critic of public sector unions, was similar to that made by former NAACP Legal Defense Fund attorney Alexis Hoag.

"Without properly identifying the problem, we cannot conceive of appropriate solutions," Hoag, now a lecturer at Columbia Law School, told Salon. "Local jurisdictions must also shift power away from police unions and into the hands of police chiefs to empower chiefs to discipline and decertify officers who abuse the public; the federal government must also cease funneling military equipment to local departments and local departments must surrender their cache of military equipment. Police should not be 'at war' with the communities they are charged with keeping safe."

There is other research suggesting that unions are linked to police violence.

Another study led by economist Rob Gillezeau found that there was a "substantial increase in killings of civilians — 0.026 to 0.029 additional civilians are killed in each county in each year, of whom the overwhelming majority are nonwhite" after police departments gained access to collective bargaining rights, he told NPR.

Police unions have increasingly come under fire after the police killing of George Floyd in Minneapolis. Bob Kroll, the president of the Minneapolis Police union, defended the officers charged in Floyd's murder and described protesters as a "terrorist movement." Kroll complained that the officers involved in Floyd's death were "terminated without due process" and that "what is not being told is the violent criminal history of George Floyd," whose criminal history mostly involved just nonviolent drug and theft charges.

The comments highlighted the extent that police unions go to protect bad cops.

Minneapolis Mayor Jacob Frey acknowledged to The New York Times that police unions have been the biggest impediment to disciplining cops in excessive force cases.

"The elephant in the room with regard to police reform is the police union," he said, arguing that the union's current contract is a "nearly impenetrable barrier" to disciplining officers.

"We do not have the ability to get rid of many of these officers that we know have done wrong in the past," he said.

It's not just Minneapolis. A Buffalo police union strongly defended officers who pushed a 75-year-old protester, causing a brain injury. Police unions have also lobbied against new reform legislation in New York state that took aim at the secrecy around police misconduct complaints and banned chokeholds. Police unions in New York City and Los Angeles alone have spent more than $80 million over the last two decades to influence legislation, according to an analysis by The Guardian.

Many police unions have also allied themselves with conservative lawmakers. Kroll, for example, spoke at one of President Donald Trump's rallies in 2018. The International Union of Police Associations has already endorsed Trump in the election.

These moves have led reformers to call for union contracts to focus on pay and working conditions rather than disciplinary issues and urge more community involvement in police union contract negotiations.

"Union contracts are a huge impediment to discipline. It's okay for them to negotiate better salaries and working conditions but we have seen police unions contacts where they have expanded into where it's nearly impossible to hold police accountable," Lynda Garcia, the policing campaign director at the Leadership Conference on Civil and Human Rights, told Salon. "They negotiate for provisions that call for the destruction of disciplinary records or a cooling-off period where police can't be interviewed for days after they're involved in a shooting. Communities deserve a seat at the table when they're being negotiated."

The problem apparently goes beyond contracts, too, as police unions have actively organized officers to push back on attempts to discipline bad cops. One New York police union called for a work "slowdown" in response to the NYPD firing Officer Daniel Pantaleo, who killed Eric Garner with a chokehold five years earlier. In Baltimore, a police "pullback" in response to the indictment of officers in the 2015 death of Freddie Gray was attributed to a 62% increase in homicides. All 57 officers on Buffalo's Emergency Response Team quit in protest after the officers who pushed the 75-year-old were suspended.

As a result, many in the labor movement have pushed to disassociate police unions from other public sector unions. In Seattle, the King County Labor Council, a coalition of 150 unions representing 100,000 workers, expelled the Seattle police union last week.

"The consequence of police abusing [collective bargaining] power is that people end up dead," Sharon Block, executive director of the Labor and Worklife Program at Harvard Law and a member of the National Labor Relations Board under President Obama, told Vox. "That is happening at a significant rate and that's just a completely different context from the rest of the public sector."

The Writer's Guild of America, East earlier this month unanimously voted to call on the AFL-CIO to "disaffiliate with the International Union of Police Associations" because "police unions are incompatible with the AFL-CIO's stated goals: 'to vanquish oppression, privation and cruelty in all their forms,' and to improve the lives of working families and pursue social equity."

"As long as police unions continue to wield their collective bargaining power as a cudgel, preventing reforms and accountability, no one is safe," the union said. "Therefore we believe that police unions do not belong in our labor coalition."