Dulcé Sloan is not here for your excuses that you "didn't know" about the depth of U.S. racism

Salon spoke with Sloan about advice from Trevor Noah, her new podcast, and how the protests helped with healing 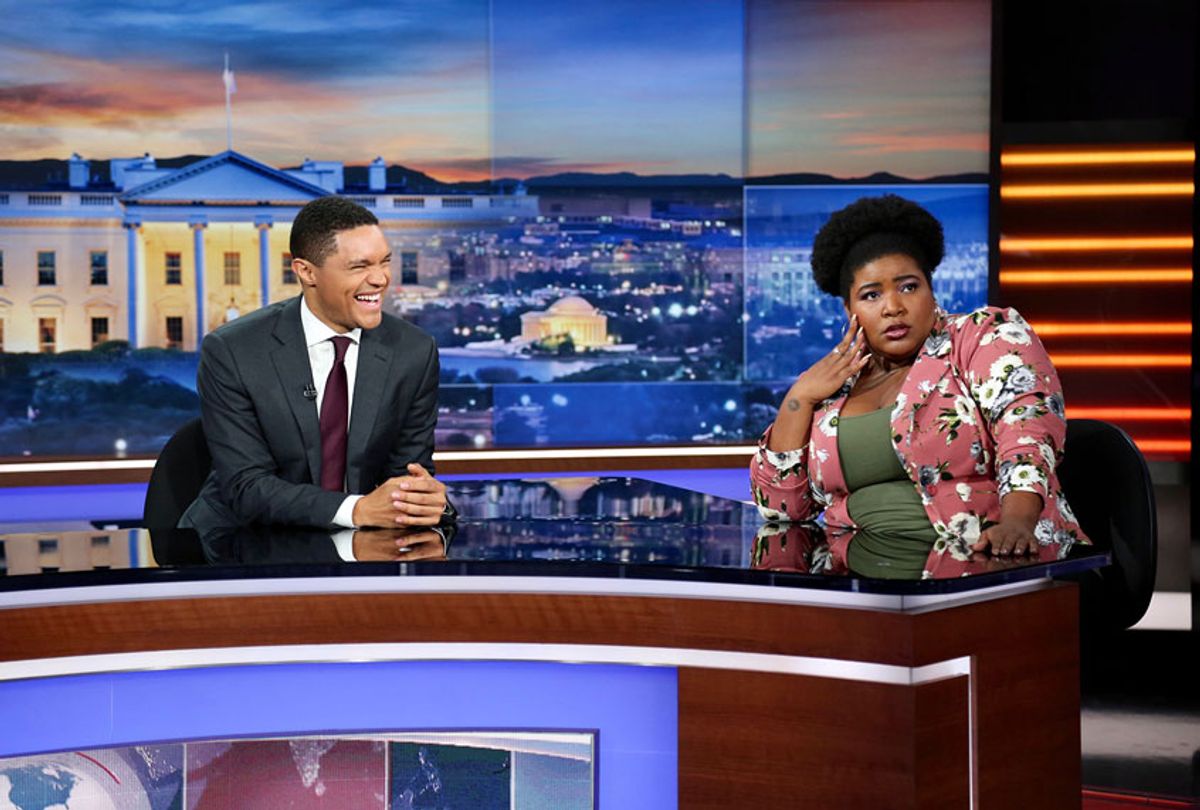 As a correspondent for "The Daily Show with Trevor Noah," Dulcé Sloan gets to work with one of late night's most popular hosts in the same job previously held by Wyatt Cenac, Samantha Bee, Hasan Minhaj and Larry Wilmore. It's a plum job in the comedy world, is what we're saying.

However, between the news cycle's increasingly frenzied pace and the pressures of transforming terrifying, enraging information into funny, informative content day after day, Sloan and her colleagues have a task to fulfill that some might see as unenviable.

Then consider the fact that the New York-based comic and podcaster is a Black woman doing this job during a historical moment that impacts her specifically and viscerally. Taking all that into account, this so-called dream job is in reality an occupation that comes with a lot of stressful layers.

"I'm annoyed with the theater of everything," Sloan admitted in a recent phone conversation with Salon. "I can see that, you know, some hearts and minds are being changed. But I'm still not on board with the whole [claim of] 'Oh my God, I didn't know!' You're lying. You've lived here your entire life. You know exactly what's happening. You know, as a white person, you can call the police, and a Black person can die."

Nevertheless, Sloan has taken the moment into her hands and grappled with each challenge with humor and conviction. Sloan credits Noah for his openness to pitching story ideas. "Right now, you know, with everything's happening, he's like, 'We have an opportunity to really dive deep and to really talk about the truth of what's happening.'"

In her capacity as a "Daily Show" correspondent, Sloan can illuminate aspects of Black life in America as opposed to commenting on the tragedies that have befallen Black people, as COVID-19 disproportionately impacts people of color, who also bear the brunt of over-policing and state-sanctioned violence. That brings her more attention, without question. But it also exposes her to some significant aggravation.

Granted, that's part of the job. "Before you can satirize something, you have to have the truth behind it. You have to have all the facts to satirize it," she explained. "Trevor, one of the best things he told me was that if you have an idea for something  and you can't figure out what's funny, you should look at the other side. So if there's any issue that's a bipartisan issue, look at both sides of the argument. One of those sides will give you the comedy."

Great advice . . . although these days it isn't without a share of psychological cost. "Sometimes looking at both sides of things is maddening. And unless you want to develop an ulcer or a migraine or destroy your phone, sometimes you can't look both sides. It depends on just how you feel about it."

And she admits that sometimes, "I can't handle it all; this news is too much." On the day that Salon spoke to Sloan, Elijah McClain, an introverted 23-year-old Colorado man who died in police custody in 2019 for the crime of wearing a ski mask in public, had risen to the top of the headlines for tragic, enraging reasons.

McClain hadn't done anything wrong and was unarmed. Aurora, Colorado officers tackled him to the ground, put him in a carotid hold and called first responders, who injected him with ketamine. McClain went into cardiac arrest on the way to the hospital and died. The officers involved in McClain's killing were not charged and remain employed.

The comedy equation of tragedy plus time does not apply here. Perhaps it never will, even after decades. How does a person absorb such horror, and stories like it, let alone sculpt pieces of them into something palatable?

Sloan has no solid answers. Right now few people do, if any. Regarding the overall grief we're living in, a stage that cycles and renews as more pangs are added each day, she believes it's the reason so many people have gotten out to march. "Black people used to have the ability of, like, whenever we'd see another unarmed Black person get killed by the police, especially as a comic, we could all just be around each other. We didn't have to say anything. We'd all be at a show and we'd just be around each other, and it was a bit of a healing," she said.

"I think that's why these protests blew up so hard, because we had to be around each other," she continued. "And the other people could see,  because they're scared, they see a situation with someone where they say, 'Wait, wait a minute, wait a minute. But the police is supposed to help you. The police isn't supposed to do this to you.' But y'all knew the police have been doing this the whole time. The only difference is now we're in quarantine."

Now, she added, everybody is split apart . . . and paying attention to the people around them for once.

Sloan is a comic who combines a tell-it-straight style with a sparkle of lightness striking a balance between forceful real talk and vivacious zest. She's covered a lot of topical comedy ground on "The Daily Show" since joining the team in 2017, simultaneously making her mark in the stand-up comedy world, landing on several lists of top-rated comedians along the way.

She also recently began hosting "That Blackass Show," a podcast in which and other Black creators and performers discuss their TV series and films reflective of the Black American experience. Their discussions range from technical analyses of each work to a particular element that resonates with Sloan or her guest on a personal level.

Since the podcast's debut on April 22, Sloan has been joined by such performers as Yassir Lester to break down the 1995 horror film "Tales From the Hood," or discussed Eddie Murphy's stand-up feature "Raw" with actor Pia Glenn. Sloan has also employed the malleable premise of "That Blackass Show" to discuss general issues about culture, as she does in a recent episode where she and drag performer and recent "RuPaul Drag Race" contest Monique Heart riff on the queer culture and their experiences out in the world.

This work is particularly important right now, as white people are making an effort to understand Black culture by, in part, interfacing with films and TV series. Just as frequently, though, they're doing it wrong. An example of this was Netflix's recently indicated spike in popularity for the 2011 white savior film "The Help."

Then there's the lovely trove one finds upon doing certain Google searches like, "Was slavery really that bad?"

To call this frustrating is an understatement, although Sloan is understanding. "Look, it has to be very hard to think that you are descended from people that could mistreat other people to such an extent. Right?" she says. "But I'm only telling you the history that y'all wrote down. I'm only telling you all the things that you did. There were more Black people in Congress during Reconstruction than there are right now, There were more Black TV shows that were on in the '90s that there are right now. So again, it's their whole, 'Well, we didn't know!' Of course you knew. Y'all wrote it down."

Presently, TV audiences are more likely to see Sloan playing the role that lots of people of color unwittingly find themselves in: that of an empathic, cultural and informational translator for white people who profess ignorance as to what to do in any given moment. Bear in mind, for most Black folks, that's not our jobs and we're tired of explaining things to you that you can easily Google.

The difference is that Sloan is getting paid for her trouble. And, to be honest, the service she, Noah and other such as "Late Night with Seth Meyers" writer Amber Ruffin have undertaken pays massive dividends when their segments go viral on the Internet.

Recent examples include her side-eye commentary on HBO Max's temporary removal of "Gone with the Wind" from its feed. And Sloan's explanation of why Walmart's decision to stop locking away Black hair care products is significant -- and why the policy's existence is an example of the quiet indignities people of color bore in silence for all these years – is particularly eye opening. This is said from the standpoint of those consumers who have lived with his unspoken discrimination, and white people who haven't noticed or questioned it for all these years.

Processing these pains, whether they emerge in the form of microaggressions or full frontal assaults, is going to take a great deal of time, and for better or worse, this puts Sloan at the forefront of a growth industry right now. But this also means she's in demand, leading to opportunities to see various sides of her talent. Later this year prime time television viewers will hear her voice work on the upcoming animated series "The Great North," which Fox has already picked up for a second season prior to series premiere. She'll also appear in the upcoming indie comedy "Chick Fight," which co-stars Malin Akerman, Bella Thorne, and Alec Baldwin.

Those productions will begin at some later date, when we hopefully have a better handle on the novel coronavirus that finally has everyone tuning in to the fact that the world doesn't work for everyone. Until then, Sloan is doing what she can to maintain while keeping viewers aware, informed and somehow connected to a shred of positivity . . . even though some days that comes more easily than others.

When asked what she's doing to steal some joy back for herself, Sloan talked about reconnecting to her love of crafting and tuning out the negativity by enjoying Korean dramas. "I'm very careful about what I watch on TV. If there's anything just a little bit heartfelt, I'm going to cry. If there's anything very close to a tender moment. Just someone looking in the eyes of their cat longingly – I'm gonna cry."