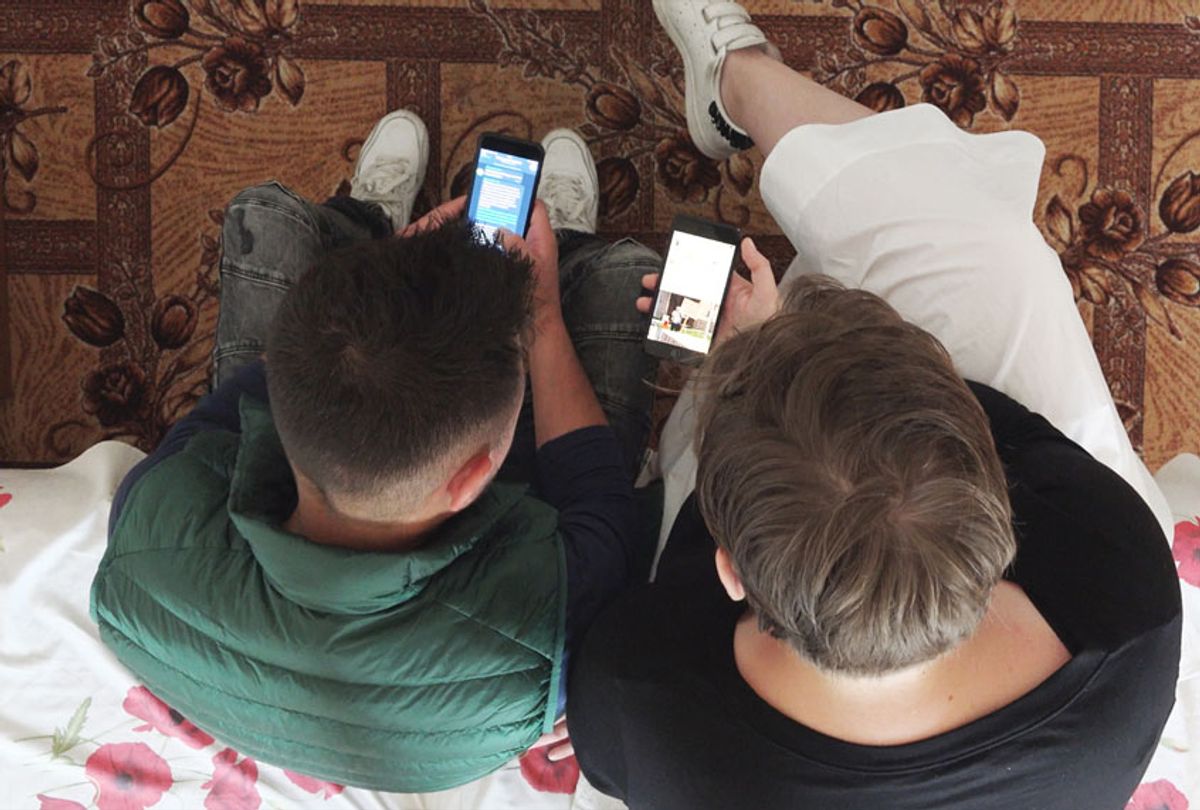 Many sequences in "Welcome to Chechnya" may leave you beyond a place words can adequately describe, although I suppose the closest term would be "chilling."

This doesn't refer to the brief asides director David France incorporates into his documentary's narrative flow, where he incorporates CCTV or phone footage obtained by LGBT activists that shows people being physically assaulted, raped and in one case, very likely breathing her last. These are horrific, certainly, but as we've learned too well the average person tends to turn away from such images even though they are scenes from reality – someone else's reality, we tell ourselves, in some place very far away.

The moments that make the blood turn icy arrive in the form of hauntingly familiar observations from people such as the matriarch to a man in hiding identified as "Grisha." A Russian national targeted in Chechnya for his sexual orientation, "Grisha" was detained in a facility where countless other gay men and lesbians were being imprisoned and tortured. When they released him, he fled and soon realized his entire family would have to join him in exile.

Once they reach yet another safer but temporary sanctuary, "Grisha" despairs at having to abandon the place he once knew that suddenly turned hateful towards him and others like him.

"It was not about the country," his elder calmly says. "We fled because of the people. It happens in every country. A person gets some power and starts abusing it. And now there is no going back."

It happens in every country.

Scenes like this make "Welcome to Chechnya" something more than another eye-opening documentary or advocacy work. It is one hour and 45 minute a warning to anyone who believes that the place they live in could never transform into a world of authoritarian horror, where a person's own family would turn them into to vicious captors or just as likely, murder them for the sake of "cleansing the blood" of their families and their people.

This purge has gained far too little international notice, but it has been in effect since Chechen leader Ramzan Kadyrov gave the green light to law enforcement and private citizens to hunt to gay, lesbian and transgender citizens with impunity.

In response, networks of citizen activists work to extract whoever reaches out to them for help, risking their own lives and families to get them safely out of the Russian republic and, for the lucky ones, to a safer life and a new start in another country.

The actors in this underground network have no prior experience in infiltrating dangerous places and extracting people whose lives are in danger. Each is an everyday person who had average lives and livelihoods before committing everything to this cause out of necessity.

Much of the world has little knowledge of the fact that some 40,000 people remain in hiding in Chechnya, and as we find out in the film, there is little to no assistance coming from the Russian government that is invested in propping up Kadyrov's hold on power.

The cinematography employed in "Welcome to Chechnya" reflects classic handheld documentary work, with the camera following a small group of activists as they work tirelessly to save as many people as they can as safely as they can. With the help of his subjects, France uses a combination of his own content and footage obtained from hidden cameras the activists carry with them on dangerous extraction missions.

The filmmaker and his team take great care to capture the bravery of people such as David Isteev, the Crisis Response Coordinator for the nation-wide Russian LGBT Network, and his ally Olga Baranova, Director of the Moscow Community Center for LGBT+ Initiatives, disclosing warm snapshots of life inside the secret shelters where they are able to hide exiled citizens.

And Isteev and Baranova are a combination of stone-faced and absolutely devoted to the righteousness of their cause, with zero expectation of thanks or recognition. In one memorable passage, he summarizes a tough case and shrugs. "Anyway," he says without emotion, "if they don't kill you, you're a winner."

Part of this effort involves impressive technical wizardry, as the filmmakers employ a digital "face double" technique that enables each survivor to be filmed and tell their stories in their own voice, affording them a crucial level of agency during a time in their lives when nothing is certain. This digital disguise doesn't mute each person's expressiveness and rarely feels intrusive.  At one climactic point, once a subject decides to go public, France drops the computerized mask to reveal his true face – and in that shocking moment you may appreciate the effectiveness of this tool.

The end result is an illuminative work that never feels entirely safe, placing the observer in the midst of its subjects in moments where not even they can be entirely sure they'll make it through checkpoints or if the planes they're escaping on will take off before officials find him. And this is entirely the point of France's film – as long as atrocities such as this are happening anywhere, nobody is safe.

We see this in the team's mission to save "Anya," the daughter of a Chechen official whose uncle attempts to blackmail her into having sex or face death by being outed, and in the public example of pop star named Zelim Bakaev, a man famous enough to have Kadyrov request a photo op, who vanished without a trace after witnesses say he was escorted to a car by government officials.

Contained within "Welcome to Chechnya" is the type of real drama here that the producers could not have predicted, including one twist that ensnares one of its central subjects, resulting in a twist that stacks heartbreak atop more heartbreak. And all of this makes watching it a riveting, rough, terrifying experience that simultaneously inspires.

It's incredible to know that in the first two years of this horrifying purge, Isteev and his cohorts resettled 151 people to safer places, with 44 of them ending up in Canada. You can probably guess how many of these refugees the Trump administration accepted.

We can shake our heads at this, or we can sit up and take notice if only for our own sense of self-preservation.

At one point, Isteev remarks if such atrocities can happen in Chechnya, why not in Russia, whose government props up the authoritarian strongman oppressing the Chechen people? Another refugee who risks his life by going public explains that he's doing so because we are all human beings and we deserve basic rights. If it can happen here, he asks those who bother to listen, why can't it happen everywhere?

If "Welcome to Chechnya" leaves you with no other thought, let it be that.