DeVos just issued a rule that could increase relief grants for private schools from $127 million to $1.5 billion 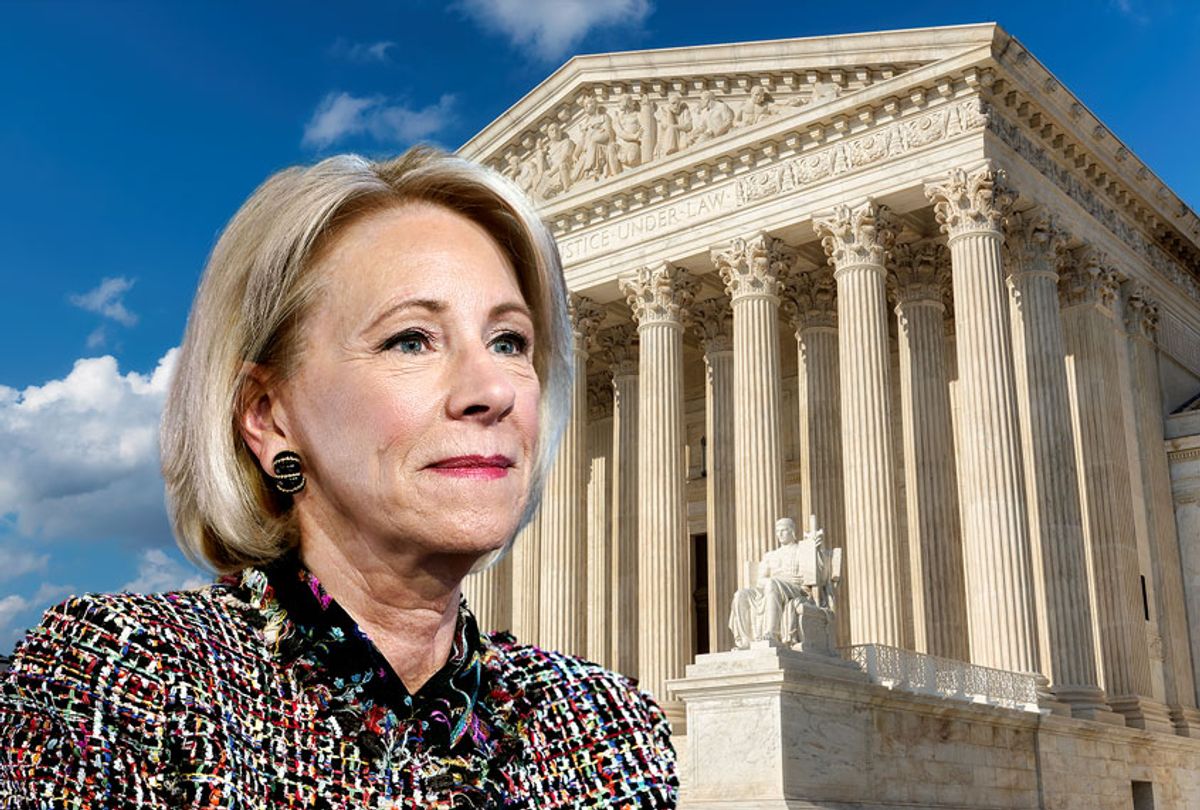 The Supreme Court, in a 5-4 split along ideological lines, ruled Tuesday that states cannot bar religious organizations from accessing government money available to others, a decision that Justice Sonya Sotomayor described as "perverse" but was cheered by conservatives and school choice advocates such as Education Secretary Betsy DeVos.

Chief Justice John Roberts, writing for a conservative majority he has recently spurned in other decisions, said that the Montana Supreme Court had discriminated against religion when it scrapped a new state program for private school scholarships

The Montana legislature had created a taxpayer-backed fund for students who attend private schools, but it did not distinguish between non-religious and religious private schools. (Most private schools in the state are religious.) The Montana Supreme Court killed the program, saying public money could not go towards religious institutions.

The U.S. Supreme Court, however, has now overturned that decision, citing the Constitution's "free exercise" clause, which prohibits the government from discriminating against people based on their religion.

"A state need not subsidize private education," Roberts wrote in his opinion. "But once a state decides to do so, it cannot disqualify some private schools solely because they are religious."

In oral arguments this January, Justice Brett Kavanaugh said that the state's line of argument was "certainly rooted in — in grotesque religious bigotry against Catholics."

The peculiar thing about the Montana ruling, however, is that it did not exclude religious schools — it eliminated the entire scholarship program.

Sotomayor noted this in her sharp dissent.

"Today's ruling is perverse," she wrote. "Without any need or power to do so, the Court appears to require a State to reinstate a tax-credit program that the Constitution did not demand in the first place," she continued.

School choice advocates hailed the decision, as did the White House, which had supported the plaintiffs.

"Laws that condition public benefits, like need-based academic scholarships, on religious status demonstrate state-sanctioned hostility to religion, pressure people and institutions to censor their religious views, and stigmatize disfavored religions," the White House said in a statement. "The Trump Administration believes that school choice is a civil rights issue, and that no parent should be forced to send their child to a failing school."

DeVos, Trump's education secretary — who has been notably hostile to public schools — told Salon in a lengthy emailed statement that the decision "represents a turning point in the sad and static history of American education," and that she is "calling on all states to now seize the extraordinary opportunity to expand all education options at all schools to every single student in America."

Before issuing the rule, which carries the force of law, DeVos had previously intervened to order that millions of dollars earmarked by Congress for low-income students be redirected to wealthy private and religious schools instead, including nearly $500,000 to a school whose website is largely devoted to proving it is not a cult.

DeVos, a vocal advocate of "school choice" — widely understood as a euphemism for religious and often segregated education options — has openly admitted that these moves are purely ideological.

The new rule gives schools two options. For one, districts can earmark money specifically for low-income students, but that limits how it can be spent — for instance, schools cannot put relief money towards increased sanitation measures, because those don't help only low-income students.

For the second option, if a public district wants to spend federal relief money on measures that will reach all students, the district must also subsidize "equitable services," such as transportation or tutoring, for all private school students in that district.

The Learning Policy Institute says this could increase the share of CARES Act appropriations for private schools exponentially — from $127 million to $1.5 billion.