On the phone with foreign leaders, Trump is "delusional" and "uninformed": Who'd a thunk it? 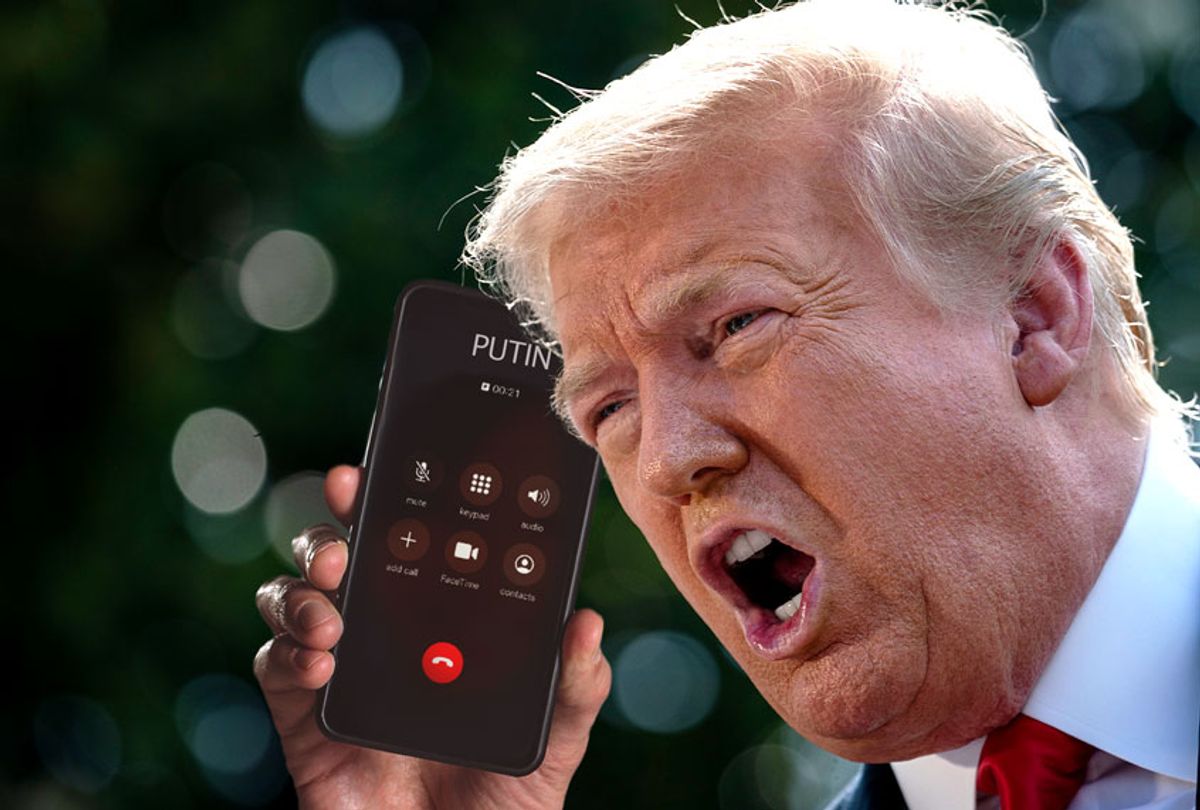 Concept: Donald Trump speeking on the phone with a foreign leader (Photo illustration by Salon/Getty Images)
--

Say what you will about the Trump administration, I don't think you can accuse it of being unusually secretive. Or if it is, then Donald Trump's White House officials are extraordinarily bad at it. There are leaks from any White House but this presidency has set records. From the very beginning, the palace intrigue has been splashed all over the media, from stories about "Javanka" versus Steve Bannon to the ongoing feuds and turf wars among the staff and stories about Trump's rages, panics and weird obsessions.

Trump has complained about the leaks and even unleashed his henchmen on the case from time to time. But when you think about it, it's quite odd that he hasn't made a bigger stink. At least, it seems that way until you reflect on the persistent rumors that Trump himself is the leaker-in-chief. Since he sees the presidency as a reality show and worries more about his TV ratings than his poll numbers, it makes perfect sense. Much of the drama of this administration has been perpetrated by the man himself. If the job of president were to be a tabloid celebrity, which seems to be how Trump understands it, he'd be right that he was the greatest president ever.

Unfortunately, that isn't actually the job description and whether Trump knows this or not, the long list of tell-all books and the nonstop whispers, rumors and leaks have revealed to the world just how enormously incompetent and destructive his tenure has been. The ongoing corruption is unprecedented. The results of the Mueller investigation and the impeachment hearings should have been enough to cast him out of office long before now. It is hard to imagine that anything could shock us at this late date.

And yet there is always more. As the country becomes swallowed up by a raging epidemic and the resulting economic disaster, the president has apparently decided to pretend that's no longer happening and is instead focusing intently on statues and protesters in hopes of stoking the culture war to a fever pitch. The picture he's presenting to voters right now is of a man who is sitting in a dark room fulminating on his Twitter feed as the nation collapses around him.

Meanwhile, the leaks out of the administration have turned into a tsunami and they are anything but tabloid gossip. This is serious business from the national security side of the administration. I wrote about the Russian bounty story on Monday, but it's only gotten more stunning since then, mainly because of the risk that the leakers are taking in getting this information out to the public. It is obvious that Trump was briefed in some form or another, likely more than once, that the Russian government was offering Taliban fighters money to kill American troops. Whether he ignored these reports, didn't understand them or just didn't care remains unknown. But the news has clearly shaken the firmament of the Republican establishment in a way we haven't seen before.

But another story bubbled up this week that is just as striking and comes from another cascade of leaks, this time concentrated in the White House. CNN's Carl Bernstein has reported on Trump's phone calls to foreign leaders during his tenure, apparently having spoken to high-level sources who either listened in on the calls or read the subsequent readouts circulated within the administration. (Salon's Roger Sollenberger recapped the article here. )

Again, just when you thought things couldn't be worse, it turns out that that they are. It's not that Trump is substantially different when he speaks to foreign leaders than he is during his press avails or campaign rallies. It's that he isn't. According to Bernstein's reporting, the president treats foreign leaders exactly the same the way he treats the media and his domestic political rivals. He bullies the allies, kisses up to the adversaries and seems to have a particular problem with women leaders, which is entirely predictable. But calling German Chancellor Angela Merkel "stupid" to her face is odious even by his standards, especially since Merkel holds a doctorate in quantum chemistry and speaks several languages, while Trump is barely literate.

The manner in which he has conducted himself on the world stage has not been hidden, and the disdain in which he's held by other world leaders is also widely known. Remember this caught-on-tape moment:

They were talking about his obscenely inappropriate announcement, or perhaps infomercial, touting his Trump National Doral golf resort as the proposed location for the 2020 G7 meeting.

Trump is obviously seen as a clown. But he's also seen as an easy mark. Bernstein writes that Trump's chiefs of staff and national security officials were "flabbergasted" by his solicitous behavior toward Russian President Vladimir Putin, and quotes two high-level officials who say that Trump achieved nothing of substance in his dealings with Putin and was so unschooled in the subject that he elevated Russia back to the level of a major power: "He's given Russia a lifeline — because there is no doubt that they're a declining power ... He's playing with something he doesn't understand and he's giving them power that they would use [aggressively]."

He has been similarly taken advantage of by Turkish President Recep Tayyip Erdogan, who, working in concert with Russia, managed to completely outmaneuver Trump on the Syrian civil war:

Two sources described the President as woefully uninformed about the history of the Syrian conflict and the Middle East generally, and said he was often caught off guard, and lacked sufficient knowledge to engage on equal terms in nuanced policy discussion with Erdogan. "Erdogan took him to the cleaners," said one of the sources.

These sources told Bernstein that Trump was often "delusional" in his dealings with foreign leaders, and did not become more "skillful or competent" as time went on. He refuses to listen to experts or really to anyone, except those, like his daughter Ivanka and her husband Jared Kushner, who fawn over him, telling him how terrific he is. These high-level White House aides came to believe at some point that "the President himself posed a danger to the national security of the United States."

These are major leaks of highly guarded conversations, obviously by people who were close to Trump, and we rightly wonder why in the world they didn't speak out before. But consider the fact that we've had all those other shocking insider accounts of this administration and it has made no difference. Republican officials have been unmoved by all of them. In fact, major figures in the party have enabled him every step of the way, and it's not as if they didn't know what was on John Kelly's or Rex Tillerson's minds when they left the White House. And as long as a circle of political loyalists protected Trump, he obviously wasn't going to change and wasn't going to go anywhere.

So, no — it probably wouldn't have mattered if these people had stepped up and told the truth earlier. But maybe it will matter now. Trump is proving himself incapable of handling the gravest crisis of his presidency and his polling numbers are dismal. If these people who come forward now can deliver the coup de grâce, perhaps it was all for the best.