Dr. Lance Dodes on the dangers of 2020: "Trump is a psychopath who will destroy democracy"

Former Harvard psychiatrist on the hair-raising months ahead: "Donald Trump cares nothing about anyone else's life" 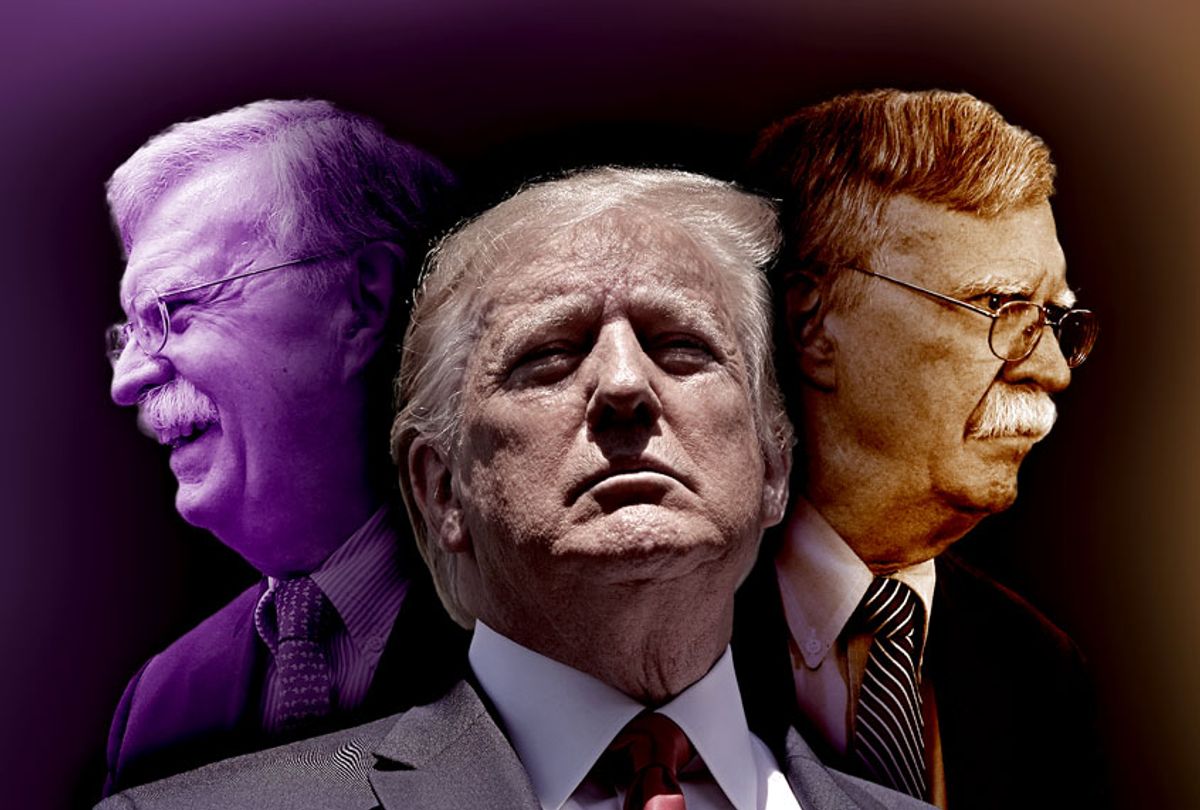 For four years Donald Trump has willfully and repeatedly violated the presidential oath of office and its promise to "faithfully execute the Office of President of the United States," and "preserve, protect and defend the Constitution of the United States."

It now appears that Trump was aware — perhaps for as much as a year — that Russian agents had placed bounties on the heads of American soldiers serving in Afghanistan. That's only the most recent example of the president's betrayal of his oath of office.

Former national security adviser John Bolton's new book "The Room Where It Happened," in conjunction with new investigative reporting from CNN shows Trump to be reckless, out of control, negligent, delusional, corrupt, incompetent and thoroughly unfit to lead the United States both domestically and internationally.

In hundreds of highly classified phone calls with foreign heads of state, President Donald Trump was so consistently unprepared for discussion of serious issues, so often outplayed in his conversations with powerful leaders like Russian President Vladimir Putin and Turkish President Recep Erdogan, and so abusive to leaders of America's principal allies, that the calls helped convince some senior US officials — including his former secretaries of state and defense, two national security advisers and his longest-serving chief of staff — that the President himself posed a danger to the national security of the United States, according to White House and intelligence officials intimately familiar with the contents of the conversations. ...

As many of the nation's and the world's leading mental health professionals have warned, Trump appears mentally unwell in the extreme. His evident mental pathologies, likely including malignant narcissism, an addiction to violence, a God complex and near-psychotic levels of delusional thinking, have only served to exacerbate his many defects of character and values.

In total, Donald Trump is unfit to be president of the United States. If he is not removed from office by the 2020 election, he will continue to pose an extreme threat to the health and safety of the American people and the world.

I recently spoke about this with Dr. Lance Dodes, whom I have interviewed on several previous occasions. Dodes is a retired assistant clinical professor of psychiatry at Harvard Medical School and a training and supervising analyst emeritus at the Boston Psychoanalytic Society and Institute.

In our most recent conversation he explained how the information revealed in Bolton's new book helps to confirm that Donald Trump is mentally unwell and a public menace. Dr. Dodes also warned that Trump will only become more dangerous in the remaining months before Election Day and may attempt start a war, impose martial law or create some other crisis in order to stay in power indefinitely.

Dodes issued another ominous warning: From his callous response to the coronavirus pandemic to his threats of violence against journalists and leading Democrats, Donald Trump is incapable of human concern and empathy — and he will find a way to follow through on his threats of death and destruction if given the opportunity.

As usual, this interview has been edited for length and clarity.

What happens to a person like Donald Trump when they suffer a narcissistic injury, such as what happened in Tulsa with his failed rally?

Donald Trump is incapable of tolerating losing without withdrawing into delusional paranoid explanations of what happened. His fundamental need to be always right and an absolute ruler, a God above all criticism, is what has led to his inability to tolerate democracy, and his repeated efforts to destroy it with his attacks on Congress, the judiciary system and a free press.

A few days after the Tulsa rally, Trump traveled to Arizona where he spoke to thousands of hand-picked adoring supporters at a right-wing evangelical church. So on one day he is in the pits of despair and anger, but the next day he is elated and flying high. How does such an emotional rollercoaster impact his mind?

Trump is able to appear more in touch with reality when he is being worshiped. Indeed, when his primitive needs are not being challenged, he can look like a normal person — it's what has made him a successful con man.  When he is challenged, however, his cruelty, sadism, paranoia, lack of conscience, incitement to violence and active pursuit of policies that kill people become obvious. These traits are properly described as "evil." In professional terms, they mean he is a psychopath.

At his rally in Tulsa, Donald Trump admitted to ordering that testing for the coronavirus be limited and slowed down so that it would appear that fewer Americans are becoming ill in this pandemic. In Trump's mind, this helps his re-election chances. Trump is killing people. Does he know that he is doing that? Or is he so delusional that he cannot connect his actions to the many thousands of Americans who are now dead?

Trump knows what he is doing, and he does not care. Many people cannot accept that Trump doesn't care about all this human suffering because they cannot grasp the idea of the president of the United States being as deeply disturbed as he is. That denial is a pretty normal reaction; nobody wants to believe we have a president who lacks human empathy and is willing for others to die for his personal gain.

Donald Trump continues to accuse former President Barack Obama of being a "traitor" and committing "treason." This is another example of Trump threatening violence and death — treason has often been punished with execution — against his political enemies. How much of this behavior is a function of Trump's projecting his own guilt on other people?

Donald Trump is incapable of guilt. In the most obvious and primitive way, often seen in very young children, he accuses others of exactly what he has done. He knows that he has committed treason, not only because of the Russian interference in the 2016 election but because he is actively and aggressively undermining the Constitution, democracy and the rule of law. His accusing others of treason was, therefore, entirely predictable. Reversing the truth is a tactic used by psychopathic dictators forever, as in destroying democratic governments in order to "restore democracy." Unfortunately, such simple tactics often work and it's only years later that citizens wake up to the fact they've been conquered from within.

How do we make sense of the standard deflection where some people say that it is all "hyperbole," and that Trump would never actually kill anybody?

Donald Trump has already killed people. He is killing people all the time through his willful negligent handling of the coronavirus pandemic in order to improve his election chances. More than 120,000 Americans have died because of Trump's behavior. His incitements to racist violence have likewise caused deaths from racist crime. There is by now overwhelming evidence that Donald Trump cares nothing about anyone else's life.

John Bolton's new book confirms that members of Trump's staff, including cabinet officials, mock and make fun of the president behind his back. How will Trump react when he learns he is so disrespected by the people around him, people who are supposed to be loyal to him?

If Donald Trump believes that people in his inner circle are even criticizing him, much less mocking him, he will do whatever he can to harm them, starting with firing them but then slandering and blaming them for his actions.

Bolton details how Trump wants journalists to be killed and imprisoned. Bolton's also writes about Trump's support for the concentration camps in China where Uighur Muslims have been tortured, and even reportedly have their organs "harvested" without anesthesia.

Bolton's book also reveals that hostile foreign leaders such as Vladimir Putin, Kim Jong-un and others have learned that all they have to do is flatter and compliment Trump in order to get what they want from him. Trump is very malleable and easily manipulated. If you were going to advise somebody about how to manipulate Donald Trump, what would you tell them to do?

It is extremely easy to manipulate Donald Trump, since he cares only about being worshiped and is indifferent to the truth or facts. From the very earliest days of his presidency, people marveled that Trump changed his views every five minutes in the direction of the last person he talked with. If you worship him, then you control Trump until the next person worships him. There is every reason to think that he has been successfully manipulated by emotionally stronger leaders of other nations.

Donald Trump has all this power, but he appears to be very lonely, sad and empty. Trump imagines himself to be a type of god, but he behaves like a small, petty, pitiable person. There is something very sad about the whole spectacle.

Normal people have a tendency to project onto Trump their own humanity — their normal sense of empathy, care, concern for others, their sadness and loneliness. This is a mistake because Donald Trump has never shown the capacity for those feelings. There is nothing in his history or behavior to suggest he has any feelings beyond those of the predator: sadistic triumph if he can defeat or destroy others, and rage and violence if he feels attacked or is at risk of losing.

At present, Donald Trump trails presumptive Democratic presidential nominee Joe Biden by double digits. If the polls are correct and Donald Trump loses on Election Day, how will he react? What advice would you give to the American people about these upcoming months?

As Hitler did to consolidate his power, it is likely that Trump will create some type of Reichstag incident, such as starting a war with China or Iran, attempting to fool the American people into thinking there is a crisis that requires total obedience to him. There is a serious probability that he will try to cancel the 2020 election, given that he has already claimed the election will be invalid and is fighting to disallow or prevent votes by people who oppose him. Trump is telegraphing his plans for all to see. What we need to see is that Donald Trump is fundamentally psychologically defective, that he is a psychopath who will destroy decency and democracy if his efforts to do this are not recognized in time.