"Sesame Street" talked to our kids about racism. Parents need to keep teaching those lessons

Growing up as a brown child in Kentucky, my family didn't teach me about racism or white supremacy. I wish they had 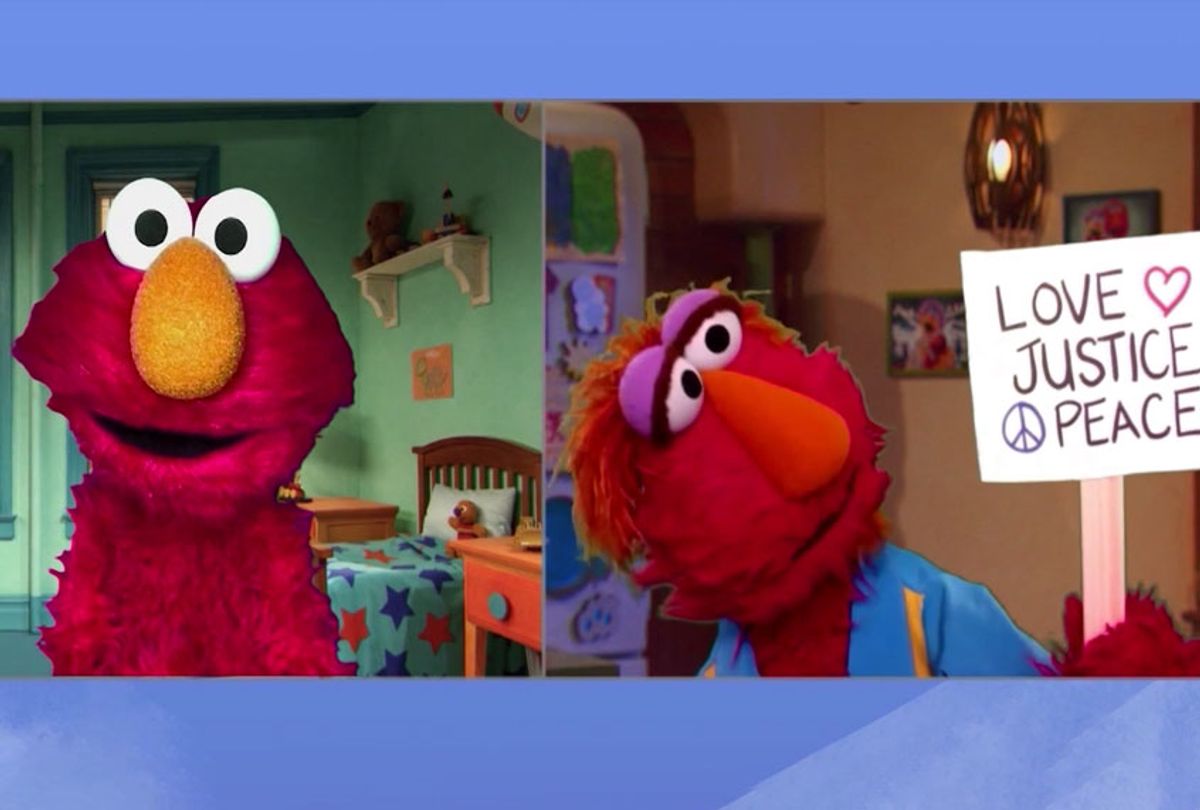 "Sesame Street" hosted a televised town hall special with CNN on COVID-19 a month ago. It was informative and helpful, if a little dry at times: Elmo and Big Bird asking Dr. Sanjay Gupta and other experts questions that kids might have about the virus. "Sesame Street" made it not scary, while still emphasizing the gravity of the pandemic. Then they hosted another a couple of weeks ago, this one about how to talk to your kids about racism. But even though the content is kid-appropriate, "Coming Together: Standing up to Racism" is really for parents. Elmo's dad's clear and gentle explanation of the current wave of anti-racism protests is one many American adults might need to hear.

Sweet, big-eyed children with their siblings and parents made short videos of succinct and well-rehearsed questions, the kinds that kids are asking everywhere. A Black girl and her sisters on screen asks, How do I answer my friends when they respond, 'But all lives matter,' while still protecting myself? Brown twins ask, Why do people have different skin colors? A white mom asks, I thought teaching colorblindness was enough — what should I be teaching my white children instead?

The answers were fact-laden and given by a diverse panel of experts. The most helpful thing for me to hear, as a woman of color raising a racially ambiguous toddler, is that it's never too early to begin these conversations, and that age-appropriate children's books are an excellent starting point. This is not the first time that (white) parents have considered how to talk to their children about racism. More than 50 years ago, Mr. Rogers dipped his feet in a kiddie pool alongside Officer Clemmons, a Black police officer character, to talk about racism and segregation. This was at a time when public pools in the South would rather be dry and empty all summer than let Black kids swim.

I have seen and heard a few arguments to keep discussions about race and white supremacy away from "our children." They say that kids need to keep their innocence and enjoy their childhoods. One angry troll said it was "sick to start kids young on racism," or to "blame a person who has been in charge for 3.5 years for a 400 year old problem." (There are many issues with that statement, I won't begin to break them down. But really? In charge?) These voices are all white. It is the white children they want to protect. It is a privilege to keep information about white supremacy away from children, when they are steeped in it simply by being American in 2020.

I keep seeing the social media post that reads, "It is privilege to learn about racism instead of experience it." How many white adults are just now opening their eyes to the racial injustices that are here today and never really went away? How many first-year college students did I have in my classroom in 2014 who claimed we lived in post-race America because Obama was in the White House? And when they were assigned to watch Spike Lee's "Do the Right Thing," they wrote about it as if it were an historical movie: "In this time, racism was rampant…" There is a divorce from the past realities and culpability in order to maintain white innocence.

When I was eight years old and riding the school bus home, I didn't know that I was repeating racist jokes made about me and my people when I sang, "Me Chinese, me play joke, me put pee-pee in your Coke." Haha, right? Just a funny, innocent kid's rhyme. Who knew that I was reinforcing stereotypes about speech patterns, malice and filth? I thought that because I wasn't Chinese, that it wasn't about me. This is the kind of problematic kid-logic that, unchecked, can last until adulthood. A friend recently said to me, "We were taught what racism looked like back then, instead of what it could look like now."

Keeping these structures invisible is not keeping racism away from children. It is instead normalizing and reinforcing white supremacy. White children especially need to know how to spot systematic racism, anti-Black statements, xenophobia against brown immigrants, and the persistent microaggressions that continue to wear away at the spirit of people of color every day. They are the ones who will be upholding these structures of white supremacy, painting them with a fresh coat of white paint to say, "These have always been here and they are integral to the structure of this building!" — in this metaphor, the building is a white supremacist structure, much like a police station — UNLESS parents and family members and educators begin to raise these white children differently.

As a brown woman and a Kentuckian, as a child and grandchild of Filipinx and Japanese immigrants, as a little brown girl growing up in a white neighborhood, I was not raised to see racism or white supremacy. My first knowledge of racism was by experiencing it from peers. I didn't understand what was wrong with me, and I wish I had grown up with a family that was able to help contextualize my experience.

When my childhood crush told me he couldn't like me because "a brownskin can't marry a whiteskin," I went home sad and disappointed, but I believed him. When a girl on the bus asked me if I was Mexican and illegal, I just said no. When my grandmother would make anti-Black statements about her neighbors, emphasizing the word "them," I knew that it was not desirable to be them.

I don't know how many times I was asked where I was from in my childhood, but I had only ever lived in one city. The question permeated my life until my answers were automatic. The question was really: Why are you brown? I am a brown mother now, raising a light brown boy in the same city where I was born and raised, in a state where all but one of the police officers who killed Breonna Taylor still have their jobs. Kentuckians will ask my son where he's from. I want to raise this child, who may sometimes pass as white, to spot and call out white supremacy, to feel empowered in his identity, to stand up for anyone who feels marginalized, to recognize his own privilege.

Officer Tou Thao was complicit in the killing of George Floyd. Officer Peter Liang shot and killed Akai Gurley. We cannot raise another generation of Asian Americans, second- and third- and fourth-generation immigrants, to uphold and support white supremacy, to literally stand by while Black Americans are murdered. Just because we have experienced white supremacy and racism as people of color does not mean we are not at fault. It does not mean that the detritus of colonialism isn't still ingrained in our cultures, when Filipinx parents and grandparents warn us not to "get too dark" in the sun, or gift us skin-bleaching lotions in an attempt to make us "more beautiful." The little things we do and say contribute to white supremacy. And though it may not seem not explicit, it is still anti-Black and it is part of the problem.

As non-Black Americans, we need to talk to our kids about racism. Children of immigrants and NBPOC, it is our responsibility to talk to our parents and grandparents about Black Lives Matter, use resources like Hasan Minhaj's "Patriot Act" or the Asian American Letter for Black Lives, which has been translated in dozens of Asian languages. We must do the homework, educate ourselves and our families, stand up, speak up, donate; we must consider the ways in which our actions, money, and language contribute to white supremacy, and take some responsibility.

Danni Quintos is a Kentuckian, a mom, an Affrilachian Poet and an educator. Find her at danniquintos.com