The lowest-profile Beatles member turns 80, but his musical & humanitarian career continues as consistently as ever 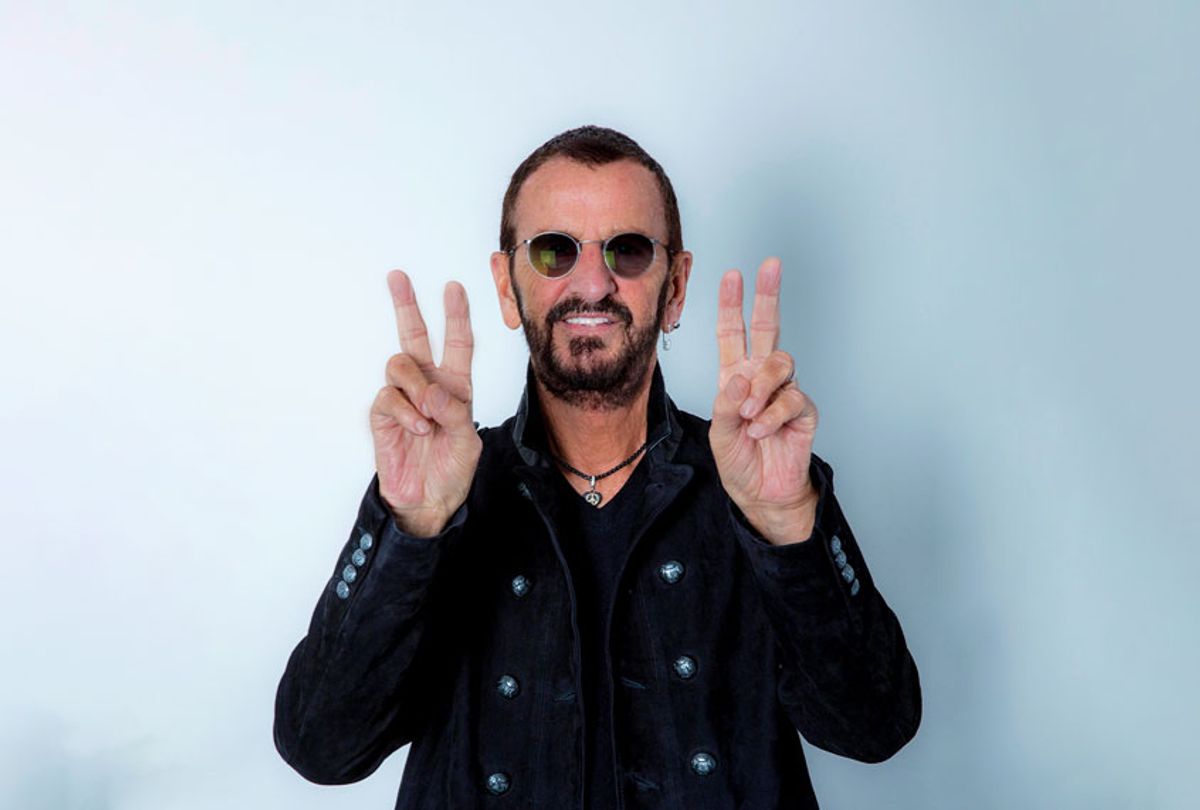 Every so often, people like to rile up Beatles Twitter with discourse about the band's music, personnel or personal lives. One major tired discussion involves considering drummer Ringo Starr — who turns 80 on July 7 — for being somehow musically inferior to bandmates John Lennon, Paul McCartney and George Harrison.

"Stop talking s**t about the Beatles," one high-profile Twitter user wrote last year. "Paul was MELODIC. John was INNOVATIVE. George Harrison was SPIRITUAL." The poster left the tweet blank after Ringo's name, however — a lame attempt at humor that was meant to be a commentary on Starr's talent (or lack thereof).

Luckily, the poster was rightfully dragged in the replies, with musicians and fans alike calling out Starr's versatility and consistency, his "cool, timeless parts" and the "joy" he brought to the band. These replies are right: The Beatles' music is such a familiar part of pop culture, it's easy to take the band — and Starr's contributions to it — for granted.

An avowed fan of early rock 'n' roll, the drummer born Richard Starkey learned the power of precision and understatement, and how a well-placed fill or run can do quite a bit of heavy lifting. A close listen to the Beatles, with a focus on Starr's parts, reveals as much.

"Lucy in the Sky With Diamonds" is so spaced-out and atmospheric in no small part due to Starr's subtle drumming: waltzing rhythms on the verse, vibe-giving cymbal crashes, the door-knock beats leading into the choruses. "Come Together," in contrast, is tense and urgent due to rattlesnake-coiled drums and maracas, while melodic tambourine and easygoing beats gently nudge "Hey Jude" forward and help the song eventually take flight at the end.

But while Starr's drumming and percussion style isn't flashy, it is lively and full of personality. That's certainly evident on the band's early work: His playing exudes joy — including and especially throughout a cover of the Shirelles' "Boys," on which he sings lead, and the lilting "Please Please Me." And this amiable approach also made him uniquely suited to keep up with the Beatles' rapid stylistic evolution.

In fact, no Beatles member was left in the dust despite the progress, which isn't always the case when bands grow and change. Starr in particular refined his core strengths — witness the patient shuffle of "Here Comes The Sun" and funky beat-keeping of "Taxman" — and expanded his arsenal. On "Across the Universe," he notably played an Indian instrument called the svaramandal, which contributed to the song's psychedelic sheen.

As a lead vocalist, his voice was droll but tender, and completely nonchalant; in fact, the jovial "With a Little Help From My Friends" and plaintive "Don't Pass Me By" both have a conversational tone, as if Starr is sitting next to you imparting wisdom. His slightly nasal twang is dosed with sincerity and sweetness on "Yellow Submarine," and the orchestrated lullaby "Good Night." And "Octopus's Garden" wouldn't work as well in the hands of another vocalist: Foreshadowing his later voiceover work for cartoons and other films — including narrating the cartoon version of Harry Nilsson's legendary "The Point!" — he fully commits to the song's surreal whimsy.

Because Starr had a lower creative profile than other Beatles, he had more freedom to explore different styles and approaches when he became a solo artist. His first effort, 1970's "Sentimental Journey," was a collection of lovingly arranged standards; Paul McCartney even arranged "Stardust" for Starr to sing, years before Macca himself started dabbling in ballads.

That same year's "Beaucoups of Blues" LP found him heading to Nashville and working with legendary session players — including Elvis Presley's drummer, D.J. Fontana; guitarist Charlie Daniels; vocalists the Jordanaires; and harmonica icon Charlie McCoy — on an album nodding to vintage country. (It's no accident Starr also sang lead on two Carl Perkins songs covered by the Beatles, "Matchbox" and "Honey Don't," as this style of music is squarely in his wheelhouse.)

And 1973's "Ringo," which is widely considered his solo high point, boasted contributions from all of his Beatles bandmates; T. Rex's Marc Bolan; members of the Band; and Bobby Keys. George Harrison even co-wrote the heartbroken "Photograph," the first of Starr's two No. 1 hits.

"I wrote better after we broke up," Starr told Dave Grohl in 2019. "I used to write songs and I'd present it to the boys, and they would be rolling on the floor laughing, because I'd just rewritten another song and hadn't noticed it!"

Joking aside, Starr's '70s and '80s output is fascinating and often overlooked these days. Part of this is availability: In recent years, several Ringo solo albums, including "Ringo" and the Nilsson-augmented "Goodnight Vienna," and disco-tinged "Ringo the 4th," have been reissued on vinyl. However, in sharp contrast to the solo catalogs of his Beatles bandmates, Starr's output generally isn't getting the deluxe reissue treatment.

In fact, certain corners of his solo catalog can be difficult to find. Neither 1983's Joe Walsh-co-produced "Old Wave" nor 1981's "Stop and Smell the Roses" are streaming on platforms outside of YouTube, while CD copies of "Old Wave," which wasn't even released in the U.S. to begin with back in 1983, start at $75 a pop on Amazon.

The latter album deserves better than obscurity for the piano-propelled rocker "In My Car" alone; in fact, Walsh covered it a few years later. But Starr's catalog is full of music to discover: While the horn-augmented pop classic "It Don't Come Easy" and the raucous rocker "Back Off Boogaloo" remain well-known, also delightful is the jaunty "Wrack My Brain," the chiming "Weight of the World" or his earnest Harrison tribute "Never Without You," which featured Eric Clapton on guitar.

If anything, however, Starr's solo work is marked by these kind of intriguing collaborative environments. He always takes top billing and center stage, of course, but working with heroes and peers alike galvanizes his creativity, moreso than most musicians. For example, in 1989, he teamed up with Buck Owens' to cut a duet version of the Bakersfield classic "Act Naturally," a song Starr also sang with the Beatles; this take landed in the Top 30 of the U.S. country charts.

In recent years, Starr has been known for his All-Starr Band tours, during which he serves as drummer/emcee for a night of his own hits and those played by a rotating cast of collaborators from various rock bands. And on 2019's rock-oriented album "What's My Name" — which features both a digitally altered cover of the Beatles-popularized "Money (That's What I Want)" and a bluesy Walsh collaboration "Gotta Get Up to Get Down"— he covered John Lennon's "Grow Old With Me," and had McCartney play on the track.

"Paul came over and he played bass and sings a little bit on this with me," Starr said in a statement. "So John's on it in a way. I'm on it, and Paul's on it. It's not a publicity stunt. This is just what I wanted. And the strings that Jack [Douglas] arranged for this track, if you really listen, they do one line from [George Harrison's] 'Here Comes The Sun.' So in a way, it's the four of us."

Starr's sentimental streak also crops up on his birthday, which he traditionally celebrates by visiting the Capitol Records building in Los Angeles and having a celebratory "Peace & Love" event. With the pandemic, he's going virtual this year and throwing a charity online gig, "Ringo's Big Birthday Show," via his YouTube channel that promises "unique home performances as well as never-before-seen concert footage" from Starr, McCartney and Walsh, as well as Gary Clark Jr., Sheryl Crow, and Sheila E.

The musical tributes Starr also promises are also impressive: All-Starr band alums Gregg Rolie, Colin Hay and Steve Lukather as well as soul legend Bettye LaVette, irreverent pianist Ben Folds, and decorated songwriter Elvis Costello. The diversity of these spots alludes to the fact Starr is beloved by artists across generations — and his musical influence is so difficult to pinpoint because, like the Beatles' impact, it's so universal and widespread.