Martha McSally: Women in the military get pregnant to "skirt" deployment

"You know, go work at Walmart if you want to do that," said Martha McSally in a 2007 lecture at Duke University 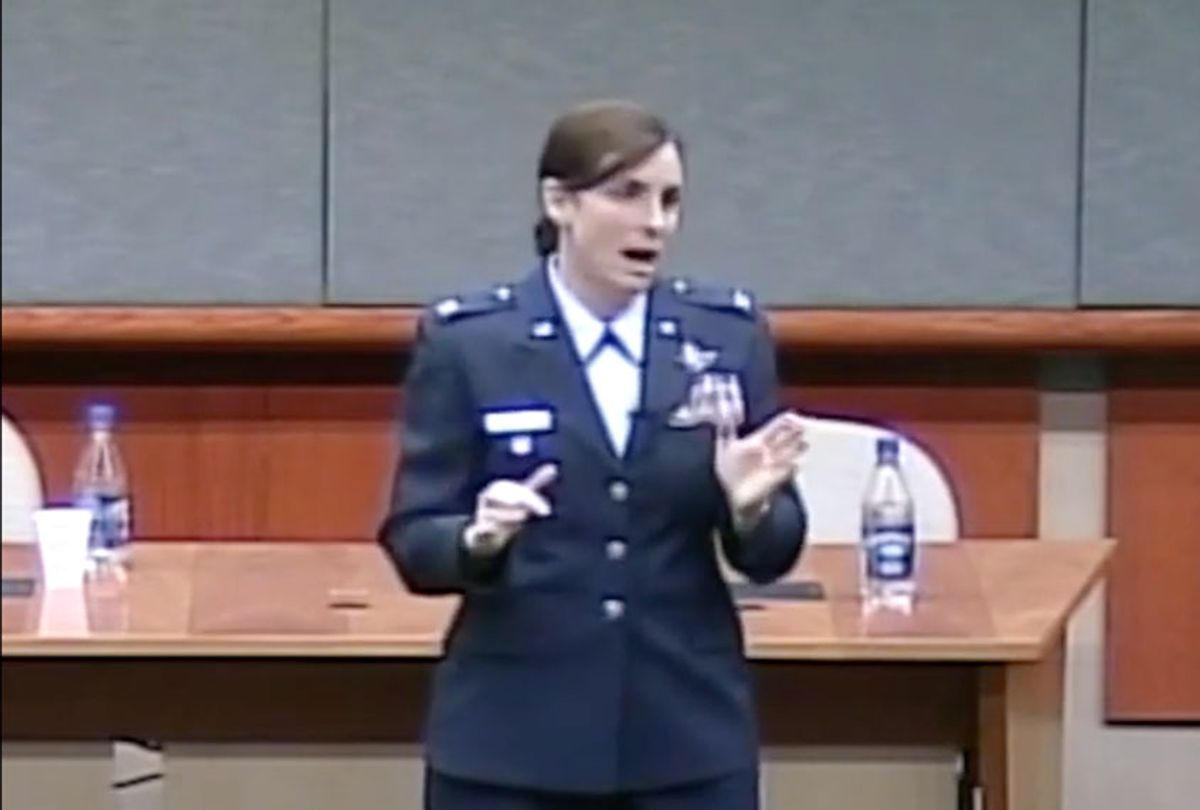 Arizona Republican senator and former Air Force combat pilot Martha McSally once published an academic paper in which she said military servicewomen should be counseled against the "foolishness of entering into a lifetime commitment (motherhood)" to avoid deployment, and called for the Pentagon to repeal the policy that allows women to use pregnancy as an excuse to "skirt" their commitment.

The article, titled "Women in Combat: Is the Current Policy Obsolete?" appeared in a 2007 edition of the Duke Journal of Gender Law & Policy. At the time, McSally, the first female combat pilot in U.S. history — and the first-ever losing Senate candidate to immediately receive a Senate seat — was pursuing a second graduate degree at Air War College.

She later expanded on the article in a lecture at the Duke University School of Law, which hosts a full video on its website. A clip about the pregnancy issue can be seen here.

McSally ran for an open Senate seat in Arizona in 2018, but was narrowly defeated by Democrat Kyrsten Sinema. Then McSally was appointed by Arizona Gov. Doug Ducey to fill the seat formerly held by the late Sen. John McCain. She could end up losing two U.S. Senate races in the same state within two years, a rare accomplishment.

In the article, the former squadron commander calls for a cultural shift to teach servicewomen that it is "not appropriate" to have a child just because they want to.

"The military must foster a culture in which military women understand that it is not appropriate to get pregnant whenever they desire," she writes. "Instead, women need to realize their duties take precedence. They must take measures to prevent unplanned pregnancies and plan for pregnancies to occur only when they are in non-deployable situations." She does not elaborate on what those measures might include, and later rules out abortion as an acceptable option.

McSally goes on to explain that the primary "issue" with her proposal is that senior officials would have trouble saying with certainty exactly what a woman's "intent" was behind her pregnancy. The solution, she says, is for senior officers to offer "proper counseling" for women:

Military leaders must create a climate where commanders are not afraid to talk about pregnancy as a readiness issue and to counsel female warriors on their obligation to avoid pregnancies when it will negatively impact unit readiness. The issue is intent, which is difficult to enforce except through strong leadership, a call to dedication and integrity, and proper counseling for military women.

McSally's policy solution to this "foolishness" also hinges on counseling.

"It is the author's recommendation that young service women, especially, need to be counseled about the foolishness of entering into a lifetime commitment (motherhood) in order to be released early from a four- or six-year commitment to serve in the military," she says.

(Her paper notes that the courts have ruled, in the 1976 case Crawford v. Cushman, that discharging pregnant servicewomen violated the Fifth Amendment's due process clause, because the policy assumes that pregnant women are permanently unfit for duty.)

McSally's most ambitious proposal is to repeal longstanding Pentagon policy that, in her words, allows pregnant women to "skirt" their duty.

The Department of Defense should rescind the policy that allows servicewomen to skirt their commitment to the military due to pregnancy. It must also create a climate where commanders are encouraged to counsel military women on their responsibilities to not plan a pregnancy during deployment vulnerability times or when serving in jobs where pregnancy would prohibit them from conducting their primary duties.

McSally, who during a 2019 hearing before the Senate Armed Services Committee revealed in emotional testimony that she had been "preyed upon and raped by a senior officer," writes that in her experience as a squadron commander "single, pregnant, junior enlisted personnel were considered the most problematic because the pregnancies were less likely to be planned and more likely to create other problems, such as financial and child-care problems, that impacted the unit."

A New York Times report published soon after that hearing specifies that McSally had been assaulted soon after entering the Air Force Academy, in 1988.

The law journal paper does not address unwanted pregnancies as a result of rape.

McSally spins her argument as feminist, even though "some argue that droves of women will get pregnant to avoid the possibility of serving in combat." The military, she says, should not apply "double standards" to any service members, and pregnancies can create the "perception or reality" of a double standard.

The article does not address in any detail the role of men in conception or parenthood, but does call parenthood a permanent condition that affects servicemen and servicewomen alike.

"Single parents and dual military parents are obligated to have a plan for care of their children in event of deployment and many manage their duties and parenthood admirably," she argues. "Servicewomen should not be allowed to avoid their service obligations merely because they become pregnant."

McSally goes on to liken unplanned pregnancies to injuries or diseases, but rules out abortion as a acceptable solution.

"The author realizes accidents may happen, and units should deal with them just like unplanned injuries and illnesses. There is a fine line between creating an ethos that addresses this issue seriously and not encouraging women to have abortions or endanger the health of their babies for fear of potential career implications," she says.

In her 2019 Senate testimony, McSally said that "weaknesses in the processes" had motivated her "to make recommendations to Air Force leaders, shaped my approach as a commander, and informed my advocacy for change while I remained in the military and since I have been in Congress."

Even though McSally, the first female squadron commander in U.S. history, said that she "felt raped by the system," she still believed that only military courts should handle sexual assault cases, arguing that commanders would otherwise be let off the hook.

She spoke more freely in her lecture at Duke, saying that the policy of giving temporary leave to pregnant women was "ludicrous" and that the mere prospect of a pregnancy is "enough to cause a problem" that all servicewomen get "lumped into."

"You know, go work at Walmart if you want to do that," she says. "Nothing against Walmart."

One year before her Senate testimony, McSally also disclosed that she was raped in high school by her track coach, who pressured her into having sex with him.

"Even though he didn't physically force me, it certainly was an emotional manipulation," McSally said in an interview with the Wall Street Journal. Afterwards, she stepped up her running regimen in an effort to stop her menstrual cycle, which she said had happened before when she ran long-distance.

"I was freaking out that he would get me pregnant," she said.

The McSally campaign did not respond to Salon's request for comment.