Netflix's Cate Blanchett-produced drama is a worthy idea, but places its refugees' plights into the background 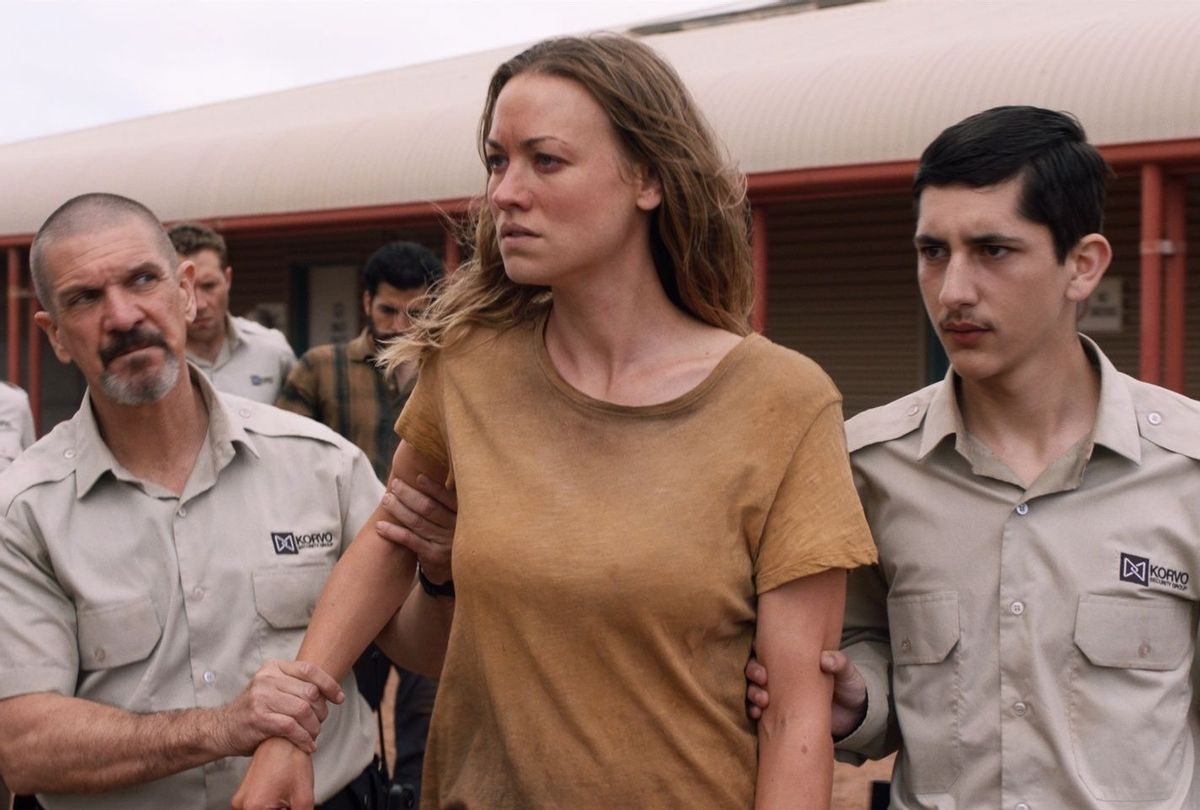 In February 2001 Vivian Alvarez Solon, an Australian citizen previously diagnosed with mental health issues, left her son at a daycare center in Brisbane but never returned to retrieve him. She was discovered more than a month later in another town's park after having fallen down a drain. Solon suffered head injuries and was taken to a hospital, where staff could not verify her identity and notified immigration.

Although Solon stated her citizenship many times – she has been a naturalized Australian citizen since 1986 – officials did not bother to verify her story, assuming instead that she was a sex worker and an undocumented immigrant. Following a brief detainment by Department of Immigration, Multicultural and Indigenous Affairs, Solon was deported to the Philippines in July 2001 and remained there until 2005.

"Stateless," an Australian drama acquired by Netflix, is not about Solon . . . although the epilogue's opening sentences easily could have referred to her.

The discovery of an Australian woman wrongfully held in detention led to a public inquiry, which found systemic failings in the Australian Immigration Department requiring 'urgent reform'.

The Inquiry recommended an independent review, to ensure that detention policy is fairly and equitably achieved, with demonstrated respect for human dignity.

But this statement refers to Cornelia Rau, a German-Australian also living with mental illness who was unlawfully held in an immigration detention center known as Baxter between 2004 and 2005. The two cases' timelines overlap, although key contrasts exist between Rau's story and Solon's ordeal. For example, Solon was mistakenly deported soon after Australia's immigration department became aware of her, whereas Rau was held in detention for 10 months.

There's that, and the fact that Rau is a white woman, and that combination of details likely made her a more enticing subject for the six-episode production from co-creators Cate Blanchett, Tony Ayres, and Elise McCredie.

Rau's story provides the inspiration for Yvonne Strahovski's psychologically unstable flight attendant Sofie Werner, a woman who distances herself from her family and grows more deeply involved with a program called GOPA that lures in members with the promise of performance lessons. In reality GOPA is something of a cult headed by the husband and wife team of Gordon (Dominic West) and Pat (a particularly menacing Blanchett).

GOPA wins over Sofie's trust almost entirely until one fateful turn sends her spiraling in to a breakdown. Weeks later she shows up at Barton detention center's check-in speaking in a German accent and claiming to be someone else.

This is the crux of what occurs in the first episode of "Stateless," and it's also the carrot meant to lure people who wouldn't otherwise sit through a six-hour drama about the plight of refugees hailing from countries across the Middle East and Africa, now stuck in some Australian version of limbo.

Those who may settle in to see how things turn out for the flaxen-haired actress from "The Handmaid's Tale" will also take in and perhaps connect to the sorrowful story Afghan refugee Ameer (Fayssal Bazzi). That's the hope, anyway. Ameer is a father who endures grinding starvation, alarming indignity and wrenching tragedy to get his family to Australia and eventually gain a protection visa for his daughter Mina (Soraya Heidari). Eventually he ends up in the camp alongside other asylum seekers he meets along the way such as the charismatic Farid (Claude Jabbour), a grimly determined Kurdish woman named Rosna (Helana Sawires) and Javad (Phoenix Raei), who sees a different sort of potential in the attention Sofie's arrival instigates.

Essentially "Stateless" attempts to employ the same tactic that Jenji Kohan did in "Orange Is the New Black" by dangling the story of a white, well-to-do blonde woman who ends up in prison as a lure into a story that is actually about the plight of the Black and brown people locked up with her.

Considering "Stateless" has been in the works for many years, and Blanchett and her fellow creators reportedly contended with extensive pushback before the project received the official go-ahead, one may well absolve the producers for taking this approach.

This also explains why "Stateless" devotes far more time and effort in developing and humanizing its white characters as opposed to bringing much (if any) depth to the refugee characters aside from the stories of Ameer and Mina. Blanchett's Pat is not onscreen for very much time, although she too serves as a A-lister carrot.

Instead the story dives deeply into the lives of Jai Courtney's Cam Samford, who becomes a new guard at Barton so he can make enough money to move his growing family into a better home. He joins the team around the same time as the detention center's new supervisor Claire Kowitz (Asher Keddie), tasked with navigating DIMIA's strained politics while enduring a power struggle with the site's general manager Brian (Darren Gilshenan), who handles the guards.

Evaluating "Stateless" purely on the basis on its performances, the production is consistently engaging and enlivened by excellent performances across the board, Bazzi's in particular. This is not to cast shade upon Strahovski's work given the gamut of emotions and psychological states she encompasses from beginning to end. She is indeed excellent, even as Sofie's storyline evolves into a distraction from the other urgent, life or death stories swirling around her in the facility.

And this nagging detraction never quite goes away, making the creators' intention to fully sketch its white characters at the expense of the non-white ones harder to ignore as "Stateless" progresses. Ergo, provided the goal in bringing "Stateless" to audiences is to humanize displaced peoples by fleshing out their stories, enabling audiences to better empathize with the dire nature of their life and death situations, the writers don't quite succeed. 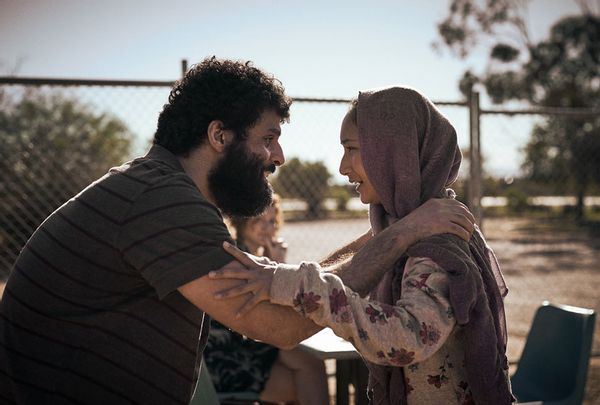 What little we learn about Rosna and Javad, for example, is mentioned in passing. Instead it's left up to Bazzi and Heidari to symbolize the plights of everyone fleeing persecution and death in homelands where they are no longer welcome. Both deliver thoughtful, painfully realistic performances, to be sure. But the reasons why an Afghan father uproots his family to take his chances with unscrupulous human smugglers, unforgiving seas and less-than-welcoming foreign land are different than those that made women like Rosna and other immigrants leave behind the lives they knew for a gargantuan question mark of a future.

All of that takes a backseat to depicting internal conflicts faced by Cam and Claire as they agonize over a dehumanizing system where they have all the power and so few resources to work with. As much of "Stateless" is devoted to showing how this corrupt immigration system corrodes the innate goodness of those holding it up as is given to placing the difficult choices Ameer makes in context. But since there are more fully developed white characters than brown ones, this verges on asking us to empathize with their moments of malfeasance instead directing those feelings toward the unfortunates being detained.

Indeed, it's unclear as to whether any of this would have been different had "Stateless" chosen to somehow include Solon's story in its mix or chosen to focus on her plight instead of drawing upon Rau's experience. History itself tells why the writers made its choices, given that although the two real-life stories overlapped, Rau's gained far more attention in the press.

"Stateless" stands as a reminder that whether in Australia or in the United States, popular outrage can only truly be ignited if the majority realizes that a system's corruption can ensnare anybody, that even a white person can be dismissively branded with the label of "unlawful non-citizen." There no doubt that it is a gripping watch and a worthwhile effort, regardless of reasons that may draw in viewers. Whether audiences will effectively process the messages imparted behind the dual serving of celebrity tease and well-meaning white people angst is frustratingly unclear.

All six episodes of "Stateless" are currently streaming on Netflix.