Eyes up here: In "P-Valley," the strippers and their grueling labor are the headliners, not men

Playwright Katori Hall gives us a gaze from the women onstage at the world around them, and the view is riveting 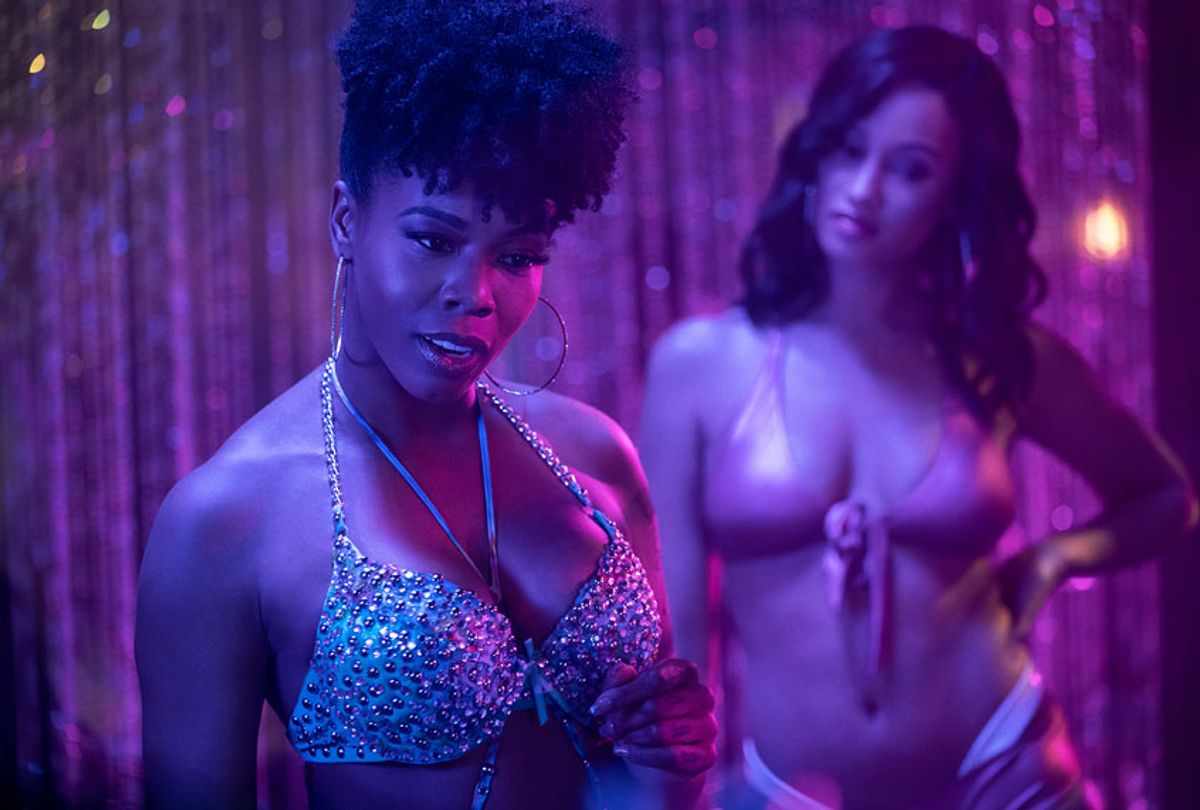 "P-Valley" spends its first episode building towards a climactic performance by Mercedes (Brandee Evans), top diva at a Dirty South strip club called Pynk. When Mercedes takes the stage, she attacks the pole with steeled muscle and such tenacity that you barely notice the crowd hooting or the dollars raining down.

Then you don't hear any of it because the sound fades away, leaving nothing but Mercedes, her athleticism and strength spotlighted as the only barriers between height and breakneck tragedy.

Mercedes grunts as she climbs to the ceiling, shifts herself upside down and slams her heels against the inner sky, shaking her hair with extreme force. Her drop back to Earth is a shock to the system, enough to mute the trap beat that come pulsing back in.

"P-Valley" creator Katori Hall writes such moments to announce with incisive clarity that this series is not about fantasy girls, but real women. In all our conversations about gaze, this is a show that puts its dollars where the female perspective is, with every episode directed by a woman and every note dedicated to depicting the work, muscle and risk that goes into their shows of seemingly effortless pleasure.

Withing various cultural awakenings occurring right now, the drumbeat refrain of "sex work is work" tends to be the least appreciated. "P-Valley" blasts that truth over its loudspeakers inviting us to see the world from the vantage point of hard workers whose efforts are regularly denigrated. This is doubly true for the women at Pynk, residents in the fictional Mississippi Delta town of Chucalissa.

Pretty is not how you'd describe the surrounding environs. Although the exterior looks rusty and its immediate surrounding a weedy mess, the Pynk's gender-fluid proprietor Uncle Clifford (Nicco Annan) keeps it exquisite on the inside, especially in the backrooms – V.I.P., Champagne and levels above. Clifford's rotating fashion collection and diving wig game are as much of a sight to behold as the dancers in her establishment; if you aren't partial to the scantily clad women, consider that eye candy to be additional insurance for your time investment.

Of higher value than the state of Clifford's beaten face and flawless manicure, though, is the well-being of the women who work with her, even if some are more difficult to know than others. One such soul goes by Autumn Night (Elarica Johnson), the lighter-skinned newcomer whose arrival immediately draws Mercedes' ire.

The veteran dancer isn't envious of Autumn's looks or her fresh meat status, and although Autumn's complexion is a real source of tension, the larger potential problem as Mercedes sees it is that her new co-worker will easily eat into her tips simply by being there. In other words, simply by being closer to white in a world populated by dark-skinned women, she'll get paid more for doing half the work.

It's an economic concern, in other words – especially since Mercedes is on the verge of opening up her own dance studio for her team of school girls. This isn't some version of the stereotypical stripper's dream but a reality. She has the site locked down. All that remains is for her and Clifford, and the rest of the town, to survive the plans of real-estate developers who have millions to play against their thousands, and hundreds, and less.

"P-Valley" expands upon the story Hall initially told in her 2015 play "Pussy Valley" in which she set out to place characters typically shown as voiceless background accessories to the fore, weaving their stories in all their fullness and flaws. Setting the story in an economically blighted Southern town ensures the eight-episode series enables Hall, who serves as showrunner, to maintain focus on topics and social flashpoints other writers may downplay or leave out entirely. These also make "P-Valley" sharply relevant at a time when the nation is examining structural racism in every industry – including strip clubs.

Under Hall's guidance "P-Valley" bakes in issues about colorism, gender discrimination and class conflict from its very first moment, and it doesn't skimp on the lyricism or the humor, sliding plenty of each into its dialogue and often having them meet in the form of Lil' Murda (J. Alphonse Nicholson), a marginally talented hip-hop artist and club regular. Tellingly the rapper is a secondary performer here, not the star, and we're left to wonder less about him than Johnson's mystery woman, seen in the aftermath of a hurricane – which one is never specified – as the series opens.

Face bruised and pulling a suitcase out of a disaster's mud puddle, "Autumn" opens it to find a dirty wallet with an identification card that isn't hers, a designer purse and a pair of sky high heels, the red soles marking them as Louboutins.

They're all she has and what she wears to the "Booty Battle" that gains her entry into this world: a thin armor of propriety in a space written off as indecent. And she finds that otherwise valuable social currency is worth less than what's underneath it.

Despite how that reads, "P-Valley" is not another morality story that paints these characters as tragic figures. Quite the opposite – Hall takes all the ingredients that go into the respectability politics Black culture and society at large hangs on the necks of these women and the men surrounding them, and shreds them in a blender. One subplot involves Mercedes' holy roller, churchgoing mother who is full of insults for her daughter while easily accepting a portion of the money she earns.

And this is part of Hall's conscientious examination of bodies as tools of labor – the value of Black bodies specifically in a world that devalues them and assigns lesser worth to women, especially these women.

"P-Valley" doesn't shy away from the hypocrisy of holier-than-thou figures of the community judging and insulting these women and Uncle Clifford while reaping the benefits of their hard work. Such threads afford the likes of Isaiah Washington, almost unrecognizable in his outstanding performance as the town's crooked mayor, to churn out mesmerizing appearances.

At no point are we asked to feel sorry for the denizens of Pynk, though. There are no victims here, but survivors; no fallen women, just mothers, entrepreneurs with their eyes on the future, or in the case of the place's sole white performer Gidget (Skyler Joy), continuing the family's tradition. Even Keyshawn (Shannon Thornton), a dancer who returns from maternity leave with purple marks on her neck and a split lip, is doing what she needs to do for her child.

In all respects, "P-Valley" sides with these women and those who support them while previewing threats on the horizon. Their view informs the focus in the writing, the directing and the performances, turning every stereotype about these places and these women on its head and presenting them from a view that serves their perspective, for once. And when the story inevitably succumbs to some of its more melodramatic inclinations, no part of its potency declines in the bargain. Consider that to be a bonus, of the good time to be had in watching these women thanklessly work, possibly shifting your point of view in the bargain.