Will the schools open? Behind that unanswerable question lies a national catastrophe

Trump's push to reopen is ghoulish — and liberals have no coherent answer. We have failed the next generation 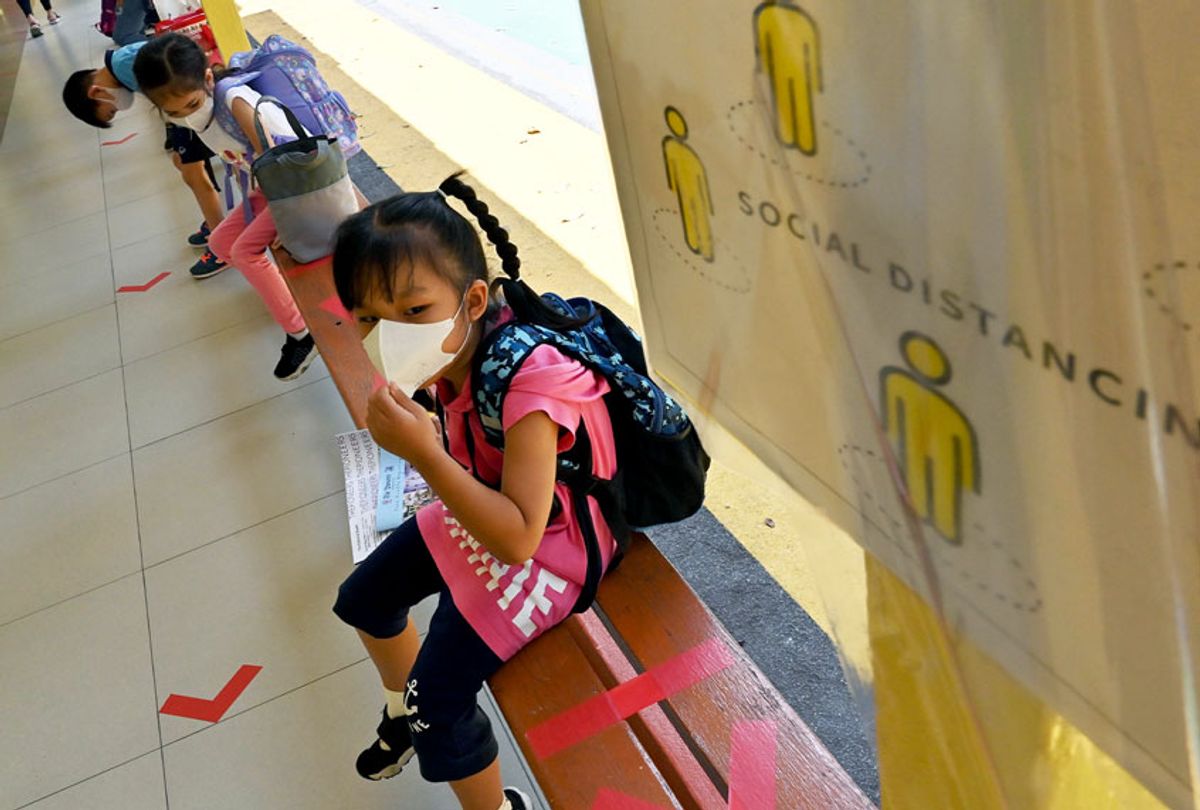 Here's what we know about whether it's safe or practical to send millions of American kids and teenagers back to school for the fall term, which in some districts begins in just over a month: Nothing.

Parents, teachers, school administrators and elected officials are — I mean, pick your cliché: We're lost. (I'm a public school parent in New York City, so I'll go with the first-person plural.) We're wandering in the desert without a map as darkness falls, or perhaps trying to find an invisible needle in a burning haystack, which is threatening to set the entire barn on fire. As Robin Cogan, a school nurse in Camden, New Jersey, told the New York Times: "It feels like we're playing Russian roulette with our kids and our staff."

She's right: It's a "Deer Hunter"-style game of Russian roulette, played blindfolded under conditions of complete chaos. For reasons of their own, which are of course entirely self-interested and poorly thought-out, President Trump and Betsy DeVos, his Dickens-villain education secretary, are pushing all public and private schools to open all the way for all students, five days a week. Like every other Trumpian strategy relating to the coronavirus pandemic, that won't work and is a terrible idea. Its only saving grace is that the federal government plays only a minor role in managing public education, which is one of those things a lot of liberals lament in more "normal" times and should be grateful for now.

One of the great ironies of this painful situation is that many of those liberals, for understandable and in many ways admirable reasons, are also eager to see schools reopen — and have put themselves in the darkly hilarious position of urging us not to reject the evil Trumpian plan just because it's an evil Trumpian plan proposed by literally the worst people ever. And look, let's agree on some stuff here.

It would be better for the mental and physical health and intellectual development of nearly all children for them to be in school. Hardly any kids have enjoyed sitting at home struggling with "online learning" models that almost entirely suck — and for many kids, especially those with special needs and those in low-income families or immigrant households, online instruction hasn't worked at all.

To state the obvious: People like me, or like my former colleague Michelle Goldberg, a prominent voice in the "schools must reopen" chorus — meaning middle-class parents with resources and options — are not bearing the brunt of this disaster. It sucks for us too, but one way or another, my kids and Michelle's will be OK. (We don't know the details of "OK" right now, which is distressing, but whatever.) Keeping kids out of school puts an unsustainable burden on all working families, but especially on working-class or poor families and communities of color. And that burden disproportionately falls on women, affecting their ability to make a living, pursue an education or build career opportunities.

All of that is true and devastating and tragic. But that left-liberal social-theory worldview is exactly what led New York Mayor Bill de Blasio to delay closing the city's public schools in March, a decision that quite plausibly cost thousands of lives. It has driven much of the New York Times coverage of this issue, which leans hard on the proposition — again, a defensible and understandable one — that public education is a foundational element of any social justice agenda. It fueled one of the most ludicrous Times editorials in that institution's troubled recent history, which began by announcing that "American children need public schools to reopen in the fall," and concluded by admitting that probably would not and could not happen on any large scale.

If you've been waiting since the first paragraph to inform me that in fact we know considerably more than "nothing," and that there's fairly strong evidence that young children don't easily catch the coronavirus, tend not to get sick if they do catch it, and do not appear to spread it to others — thank you and, yes, that's true. (When it comes to high school kids, the picture is nowhere near as clear.) But honestly, that argument — like the "public schools are central to democracy" argument — feels like a tangential issue right now, and a classic example of the liberal tendency to compartmentalize and avoid the bigger questions.

Yes, various other countries have reopened their schools, with greater or lesser degrees of success. That's gone pretty well in most of Europe, although Hong Kong and Israel, two very different kinds of places, had to shutter the schools again after renewed outbreaks. But no other country, anywhere in the world, has tried to do the unbelievably stupid thing the United States is apparently about to do: Reopen the schools, in piecemeal, half-baked, "let's put on a show" fashion, while the pandemic is still surging and has clearly not yet crested, and without any semblance of a national strategy to control it.

There's a central flaw in the left-liberal "schools must open" logic, which is so obvious we hardly ever talk about it. All of this rests on the fundamental assumption that a neoliberal "market" economy is the natural order of things, and that real solutions that might make this situation manageable for parents, students, teachers and employers are simply off the table. Another kind of society might have a national child care policy and a national health care policy in place, which might require some emergency augmentation but would already be there. It might authorize direct, continuing payments to parents forced out of work because their kids are at home — or, what the hell, even to parents who can continue to work from home but would like to preserve what remains of their sanity and occasionally get some sleep.

We appear to be stuck in a circular conundrum, which everyone can perceive but no one can fix: Kids have to go to school because their parents have to go to work, because that's the only way society can possibly function — but none of that stuff is possible amid a massive public health emergency that seems to be getting worse rather than better, especially under a federal government whose official policy is that reality does not exist.

Given all that, what will actually happen? Nobody knows, but it won't be good. Most big school districts, including New York's — by far the largest in the country — are trying to cobble together some version of "blended" or "hybrid" learning, which means a combination of limited, socially-distanced in-person instruction and the largely disastrous online-learning experiment of the spring.

Some districts in especially hard-hit areas, including Miami and Phoenix, have made clear they will almost certainly begin the year with online instruction only — and as inadequate as that is in educational, social and psychological terms, I can't see how they could make any other choice. In Palm Beach County, the president's nominal place of residence, officials have said the entire school year will probably be online — and if that's not a giant FU to the lord of Mar-a-Lago, I don't know what would be.

But the bigger picture isn't even as coherent as that sounds. Most school districts still have no idea whether they'll open the doors in the fall, or to what extent, or whether any of their throwing-spaghetti-at-the-wall instructional plans will actually work. The teachers union in Los Angeles, the second-largest district in the nation — and one of the worst pandemic hotspots of the summer — has officially called for schools to remain closed in the fall, with the overwhelming support of its membership. With Mayor Eric Garcetti clearly on the verge of ordering another shutdown, it appears unlikely that any L.A. students will attend school this year.

A hundred miles south in San Diego, officials not long ago confidently announced a "detailed plan," developed in consultation with public health experts, that would allow them to reopen all schools at the end of August. But that was during the moment of California hubris, when the state appeared to have weathered the COVID storm and begun moving into a measured reopening. Over the last week or so, San Diego County has reported about 500 new cases a day, and dozens of uncontrolled "community outbreaks." The teachers union there has gently expressed "concern" that the school district's plan does not appear to involve smaller class sizes, improved ventilation or increased testing capacity — and that there's no funding for any of that stuff.

Teachers unions in New York, Chicago and other large cities haven't taken clear positions yet, but the possibility of a widespread refusal to return to work appears very real. There's a growing sentiment among teachers, principals and many elected officials that schools should not even try to reopen in any given locality until coronavirus case numbers are declining and "community spread" is clearly under control. Houston Mayor Sylvester Turner put it succinctly over the weekend: "It makes no sense" to consider sending children in his city back to school, given the scale of the current crisis. Under that standard, probably only the Northeast Corridor states would currently qualify for reopening — but given the horrific experience those of us in the New York metropolitan area endured through the early spring, there's not much appetite for taking on unknown risk.

Who wants to stand up right now and tell me that this is the greatest nation in the world? Because that has gone from highly debatable to an objectively cruel falsehood. Along with all the conflicting arguments and ambiguous public-health evidence, we face the transmutation of what ought to be a straightforward (if challenging) question of social policy into a culture-war issue — because absolutely goddamn everything in 2020 America has to be a culture-war issue. (I stood in a supermarket in upstate New York this weekend looking at the stacks of beer cartons on the floor and realized that they presented a culture-war issue: Coors Light, or some overpriced, overly-hoppy IPA with zany graphics on the box? If there's a neutral space in that conflict, it's probably Heineken — which was sold out.)

The fact that we do not have the slightest f**king idea how to send 60 million-plus American kids back to school safely amid a worsening pandemic isn't just an inconvenience, or an impediment to a return to economic normalcy — which is just not a thing we can have right now, people, and pretending it might somehow be possible is not helping.

It's a social catastrophe whose effects will be far-reaching and unknowable. It's a national humiliation, one of many in this period of rapid American decline or implosion. It's a giant flashing ALL-CAPS sign, directed at adults of all backgrounds and dispensations and political parties, informing us that we have failed in our primary responsibility of creating the best possible options and opportunities for those who will still be here when we're gone.