"Risk is involved in everything we do, from learning to ride a bike to riding a rocket into space," DeVos says 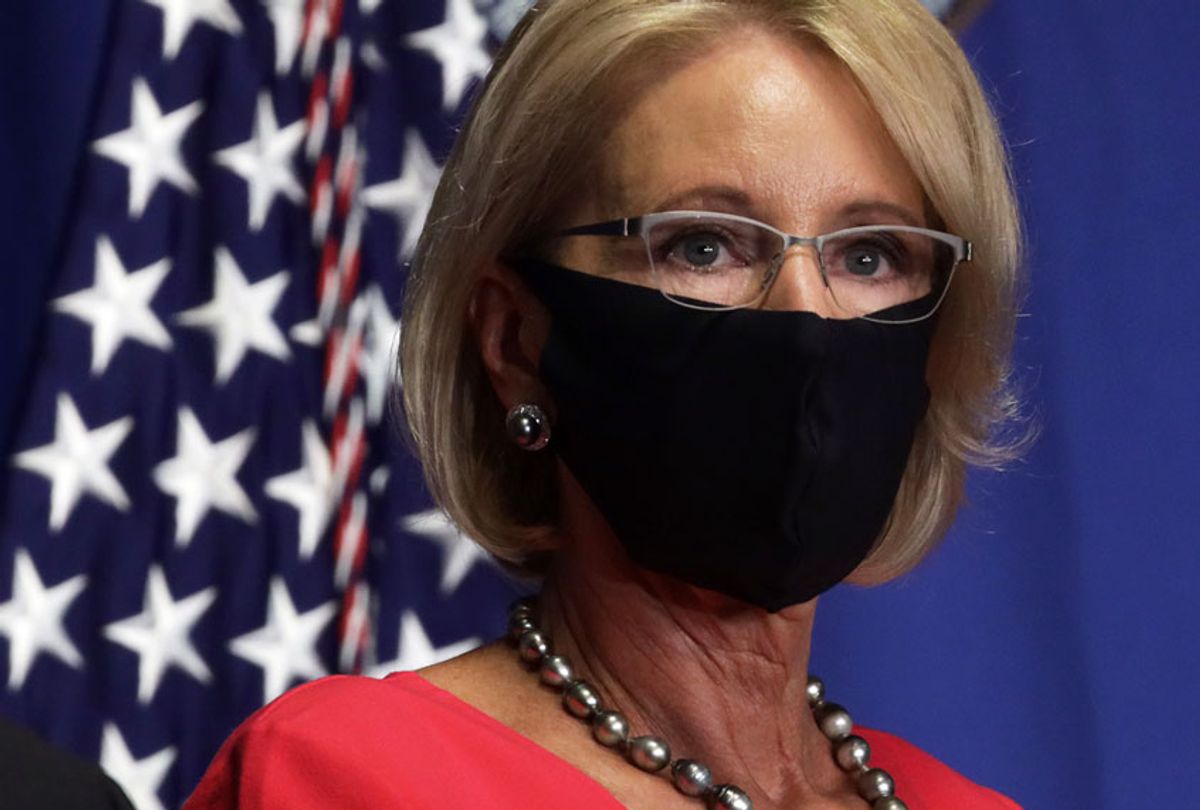 Secretary of Education Betsy DeVos reportedly told U.S. governors in a Tuesday conference call that the health risks surrounding the coronavirus pandemic should not deter them from reopening schools, because other activities like riding a bike or attaining enough velocity to escape the Earth's atmosphere also involve taking risks.

"Education leaders need to examine real data and weigh risk," DeVos was quoted as saying. "Risk is involved in everything we do, from learning to ride a bike to riding a rocket into space and everything in between."

DeVos, who married into the multibillion-dollar Amway pyramid-scheme fortune, doubled down on those private remarks in Wednesday's White House coronavirus task force briefing, where she demanded that schools be "fully operational" this fall.

"Ultimately, it's not a matter of if schools should reopen. It's simply a matter of how. They must fully open and they must be fully operational," she said, a striking break from her position in the spring that some schools may need to continue with virtual learning.

"How that happens is best left to education and community leaders," she added.

Despite the fact that she herself is the nation's premiere education leader, DeVos did not elaborate on the question of "how." But she did not hesitate to push blame onto education officials and teachers, alleging that some "just gave up."

"I and state school leaders were disappointed," DeVos said, in reference to measures that public schools took to accommodate government and public health emergency guidance in the spring.

"Some didn't figure out how to teach their students," she said. "They just gave up."

DeVos singled out Fairfax County Public Schools, one of the top public school systems in the nation, whose plan to split the school week into two days of classroom learning and three days of virtual learning was, in her view, an abomination.

"Their springtime attempt at distance learning was a disaster," she said of the largest and wealthiest school district in the D.C. metro area, without further explanation. "Things like this cannot happen again in the fall."

DeVos repeated the claim later that day in an interview with Fox News host Neil Cavuto.

"The president is threatening aid to those that don't [reopen]. What do you think of that?" Cavuto asked.

When DeVos replied that those schools would be breaking a "promise" to families, Cavuto pointed called attention to the elephant in the room.

"But there are extenuating circumstances, right?" he asked. "There was this little thing called the coronavirus."

DeVos did not address those circumstances, instead reiterating that schools must fully reopen. She again called Fairfax County a "disaster."

But DeVos, in three rare public appearances in as many days — after President Donald Trump's tweet Monday that "SCHOOLS MUST OPEN IN THE FALL!" — seems uniquely inured to that reality.

When the education secretary stepped down from the podium at Wednesday's briefing, Vice President Mike Pence took her place and almost immediately told reporters the opposite message. It should be expected that school districts would "adjust to a certain set of days or certain limitations" depending on local conditions, he said.

Redfield told reporters that federal CDC guidelines, which advise physical distancing of six feet, are not meant to "supplant" local and state rules.

Birx urged individuals to cancel indoor gatherings amid rising infection and hospitalization rates. She gave that advice moments after Pence said, "It's time to get our kids back to school."

Pence, for his part, would not back up President Donald Trump's Twitter threat to withhold federal funds from public schools that refuse to reopen in the fall.

On Fox News, DeVos backed the president, saying: "We are looking at this very seriously."

The threat, however, is constitutionally untenable.

"When it comes to our schools, Congress funds federal education programs that serve some of the most vulnerable young people in our country," Evan Hollander, spokesperson for the House of Representatives Appropriations Committee, said in a statement. "The president has no authority to cut off funding for these students, and threatening to do so to prop up his flailing campaign is offensive."

Pence, for his part, pointed to the roughly $13 billion Congress set aside for schools as part of the CARES Act, though those funds were intended to provide relief for districts and students financially impacted by the pandemic — not to support re-opening efforts several months down the road.

DeVos herself has diverted a large portion of that money away from public schools, directing them to share it with private and charter school students.

A bill passed by the Democratic-led House, which would provides another $58 billion for education, has stalled out in the Senate.