"Women are in to serve": Joni Ernst rejects McSally's claim on pregnancy in the military 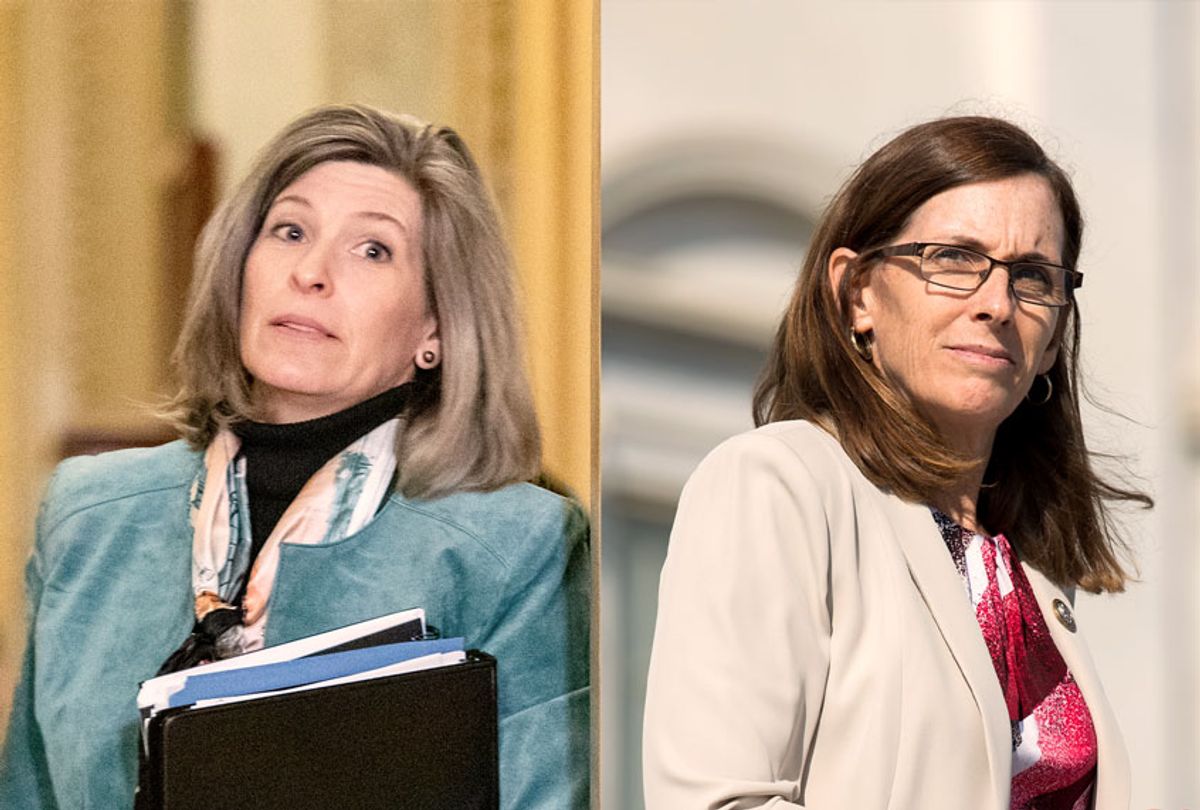 Sen. Joni Ernst of Iowa repudiated last Wednesday an argument that her Republican colleague Sen. Martha McSally of Arizona published in a law journal in 2007, in which she said that military servicewomen should be counseled against the "foolishness of entering into a lifetime commitment (motherhood)" to avoid deployment.

In the article — first reported earlier that week by Salon and titled "Women in Combat: Is the Current Policy Obsolete?" — McSally, the first woman combat pilot in U.S. history, also called for the Pentagon to address the "problem" at the national level by repealing the policy that, in her view, allowed women to use pregnancy as an excuse to "skirt" their commitment.

Ernst, herself a veteran of the Iowa National Guard who served in Kuwait during the Iraq War and retired as a lieutenant colonel after 22 years, made the remarks at the Barefoot Bar in Lake Okiboji, Iowa, and they were captured in a video obtained by Salon.

"Most of the time, too, when you're put on notice it would be really hard for them to get their cycle and everything," she added.

"As a matter of fact, my experience has kind of been the opposite," Ernst continued. "I had a young woman — her husband was in my unit, too — and they had a baby that was under a year old. I gave her the opportunity to stay home and excuse her from going on deployment, and she said 'No, this is why I've trained.' She and her husband both deployed and left their child here with her parents. So I don't think they do. There could be circumstances out there, but by and large women are in to serve."

That directly contradicts what McSally says was her own experience as a squadron commander, where "single, pregnant, junior enlisted personnel were considered the most problematic because the pregnancies were less likely to be planned and more likely to create other problems, such as financial and child-care problems, that impacted the unit."

McSally, who published the paper in the Duke Journal of Gender Law & Policy, later expounded on it in an in-person lecture at Duke University School of Law. The school hosts a video of the lecture on its website.

She spoke more freely in the lecture, saying that the Pentagon's policy of giving temporary leave to pregnant women was "ludicrous" and that the mere prospect of a pregnancy was "enough to cause a problem" that all servicewomen get "lumped into."

"You know, go work at Walmart if you want to do that," McSally said. "Nothing against Walmart."

McSally ran for an open Senate seat in Arizona in 2018, but was narrowly defeated by Democrat Kyrsten Sinema. McSally was then immediately appointed by Arizona Gov. Doug Ducey to fill Arizona's other Senate seat, left vacant after the death of Sen. John McCain. In the process becoming the first person in U.S. history to attain a Senate seat after losing the election.

During a 2019 hearing before the Senate Armed Services Committee, McSally revealed in emotional testimony that she had been "preyed upon and raped by a senior officer." A New York Times report published soon after that hearing specified that McSally had been assaulted soon after entering the Air Force Academy in 1988.

In the article, McSally argues that the primary "issue" with her proposal is that senior officials would have trouble saying with certainty exactly what a woman's "intent" was behind her pregnancy.

The issue is intent, which is difficult to enforce except through strong leadership, a call to dedication and integrity, and proper counseling for military women.

The article does not address pregnancies as a result of rape.

Today McSally finds herself trailing Democratic challenger Mark Kelly — a former astronaut and the husband of former Rep. Gabby Giffords — by double digits in most polls. She could end up losing two U.S. Senate races in the same state within two years, a rare accomplishment. A poll from June showed her trailing Kelly among women voters by 15 points.

Ernst, a survivor of sexual assault who voted to confirm Supreme Court Justice Brett Kavanaugh, is also far from safe in the Iowa Senate race. A statewide poll released July 6 shows the one-term incumbent trailing Democrat Theresa Greenfield by two points, while a poll from mid-June had Greenfield up by three points.

You can read McSally's article here, and watch her expository lecture here.

The video of Ernst's remarks, acquired and posted by the liberal PAC American Bridge, can be found here.