"She knows better," but "no one in this administration cares about government ethics," Walter Shaub says 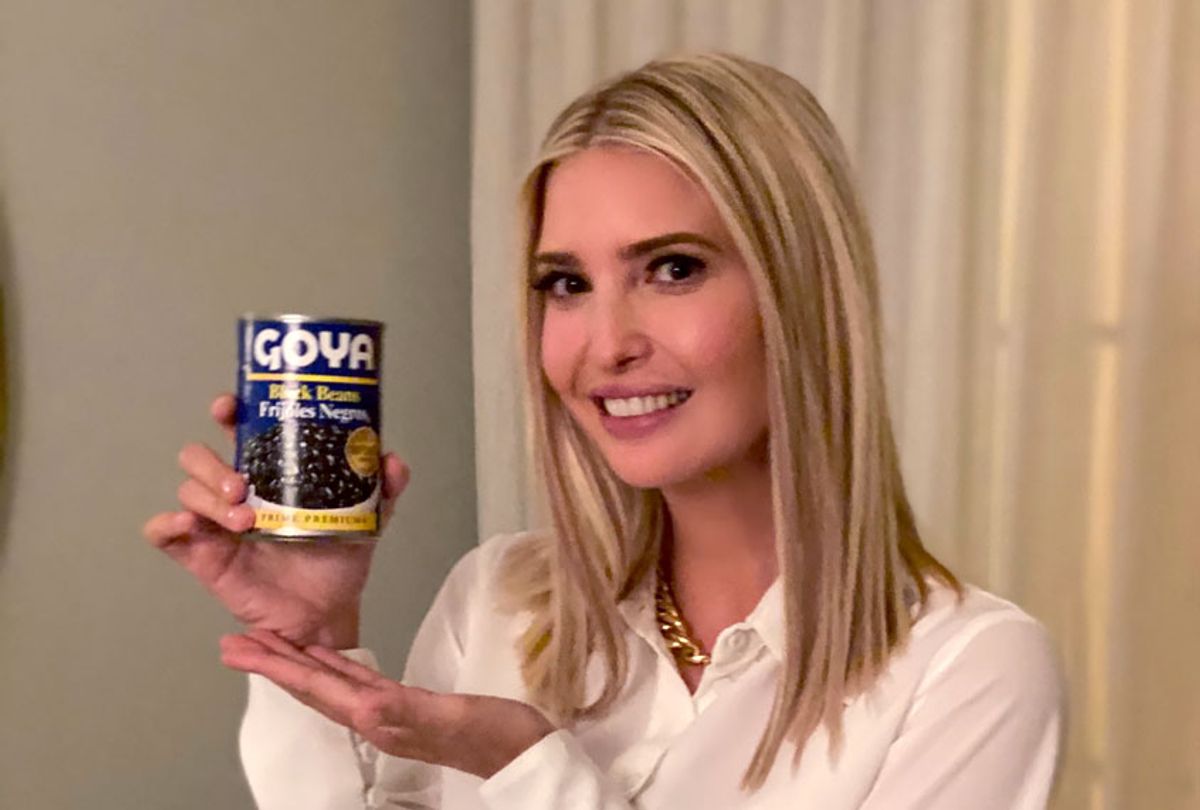 First daughter Ivanka Trump, a senior White House adviser, was accused of violating federal ethics rules by sharing a photo of herself holding a can of Goya beans along with the company's tagline.

After CEO Robert Unanue said the country was "truly blessed" to "have a leader like President Trump" during a White House event last week, Goya has faced calls to boycott its products.

Ivanka appeared to respond to the boycott by posting a photo of herself promoting canned black beans.

"If it's Goya, it has to be good," she wrote, adding the Spanish translation: "Si es Goya, tiene que ser bueno."

Walter Shaub, who served as the White House ethics chief during former President Obama's second term, as well as for Trump's first six months in office, said "the Goya tweet was an ethics violation."

Though Ivanka notes that hers is a personal account in her bio, "it's a bad idea to include your title in the bio because that's a factor weighing in favor of finding a violation occurred," Shaub wrote on Twitter. "If you use that social media account to tout a company's product a few days after the company's CEO publicly praised your father-president from the White House rose garden, that's one more factor weighing against you -- and a particularly strong one at that."

Ivanka's tweet came in an "obvious response to the backlash" and creates a "strong appearance that you're endorsing a product in your official capacity," he explained.

"For this reason, Ms. Trump's Goya tweet is clearly a violation of the government's misuse of position regulation," he wrote. "Ms. Trump has had ethics training. She knows better. But she did it anyway because no one in this administration cares about government ethics."

President Donald Trump followed up his daughter's tweet with an endorsement of his own.

Shaub tweeted that the president's comment was "further proof that Ivanka's tweet was done in her official capacity."

"The administration is pushing Goya in exchange for the endorsement the company's CEO gave Trump," he said. "Whether or not expressly coordinated, Ivanka's tweet is a part of that effort. It's an ethics violation."

Rep. Alexandria Ocasio-Cortez tweeted in Spanish, "If it's Trump, it has to be corrupt."

The White House defended Ivanka's tweet, arguing that she was only expressing her "personal support" for the brand.

"Only the media and the cancel culture movement would criticize Ivanka for showing her personal support for a company that has been unfairly mocked, boycotted and ridiculed for supporting this administration — one that has consistently fought for and delivered for the Hispanic community," White House spokeswoman Carolina Hurley said in a statement. "Ivanka is proud of this strong, Hispanic-owned business with deep roots in the U.S. and has every right to express her personal support."

Shaub lamented that the Trump administration had done nothing in response to ethics violations, such as White House adviser Kellyanne Conway's repeated violations of the Hatch Act, which bars federal employees from engaging in certain political activities like campaigning.

"In a lawless administration, it would take strength of character and a conscious choice to abide by ethics rules. Few would expect a nepotist, whose only qualification for White House employment is her family relationship to the president, to exhibit such character," he added. "In this regard, Ms. Trump's misconduct is not surprising. It's disappointing that she has lived down to our low expectations for members of her family, but disappointment has been the one consistent theme of the Trump administration in matters of government ethics."