Trump says it’s “terrible” to question why Black people are killed by police: “So are white people” 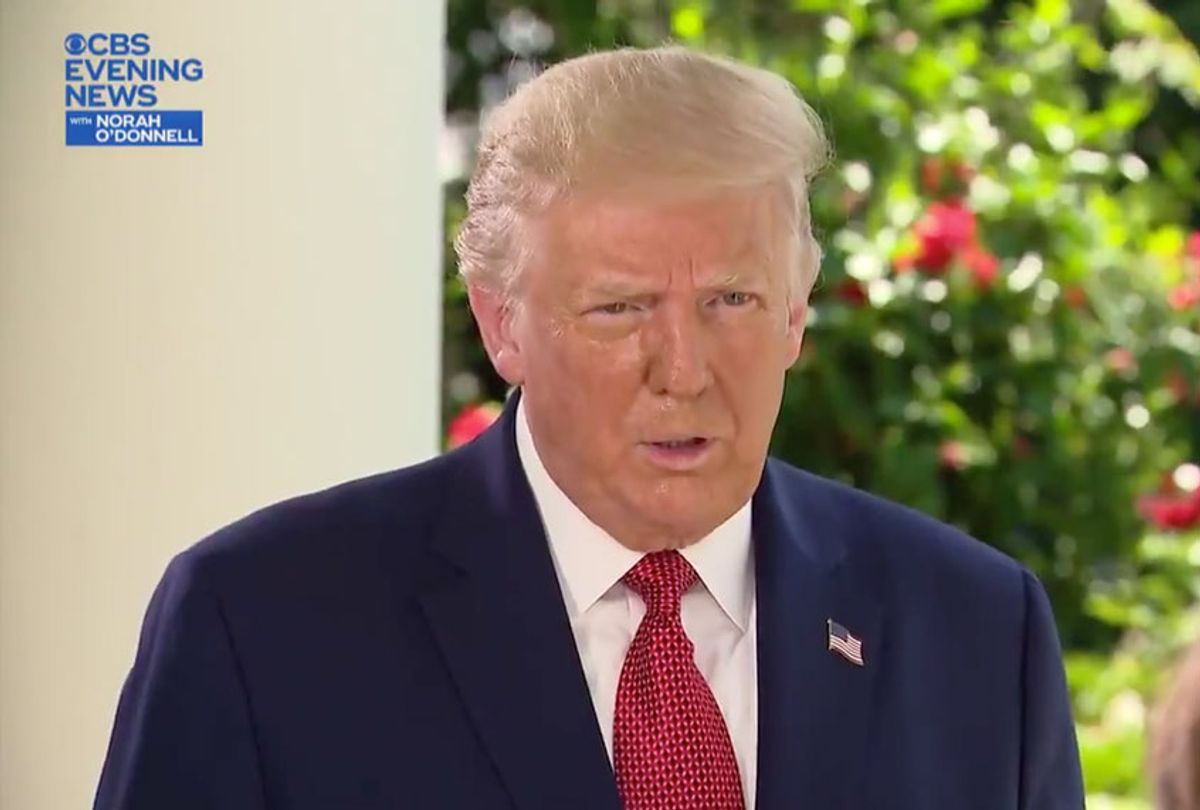 President Donald Trump continued to push racist rhetoric in response to ongoing protests over police brutality and systemic racism as he downplayed the shootings of Black people by authorities and defended the Confederate Flag in a Tuesday interview with CBS News.

CBS News correspondent Catherine Herridge pressed Trump on why Black Americans were "still dying at the hands of law enforcement in this country."

Harridge pressed Trump on whether he understood "why the flag is a painful symbol for many people because it's a reminder of slavery."

"Well, people love it, and I don't view — I know people that like the Confederate flag, and they're not thinking about slavery," the president said before comparing supporters of the flag to the "Black Lives Matter" movement.

Atlanta Mayor Keisha Lance Bottoms, a Democrat under consideration for the vice presidential nomination, criticized Trump's comments in an interview with CNN.

"To compare Black Lives Matter with the Confederate flag is simply despicable and out of touch," she said, adding that the president "lacks empathy."

Trump was not done criticizing the protesters, baselessly alleging in a separate interview that a St. Louis couple that threatened to shoot protesters in front of their $1 million mansion would have been assaulted.

"They were going to be beat up badly, and the house was going to be totally ransacked or burned down like they tried to burn down churches," he told the far-right outlet Townhall.

St. Louis Circuit Attorney Kim Gardner, who is weighing charges against the couple, said in a statement that Trump and Missouri Gov. Mike Parson "came after me for doing my job" after she launched an investigation into the matter.

Parson on Tuesday told reporters that Trump had promised to intervene and "do everything he could within his powers" to protect the couple.

"He understands the situation in St. Louis and how out of control it is for a prosecutor to let violent criminals off and not do their job and try to attack law-abiding citizens," Parson said. "The conversation I had with the president — said that he would do everything he could within his powers to help with this situation."

"While they continue to play politics with the handling of this matter, spreading misinformation and distorting the truth, I refuse to do so," Gardner said in response.

Trump also held a campaign rally in the Rose Garden under the guise of a formal news conference. The president used the speech to stoke more racial fears.

"You're going to abolish the suburbs with this," he declared.

"Trump contends that Biden would 'abolish the suburbs' and cites his wish to repeal an already dormant fair housing rule," The Washington Post's Cathleen Decker tweeted. "Those sorts of measures marked campaigns in the 1960s in retaliation for civil rights efforts."

"Trump's racism is so absolute that he refuses to even acknowledge the epidemic of police violence against Black people in America," the ACLU said in a statement. "His racist dog whistles keep getting louder."

"It's too easy to call Trump a racist, we've had years of his racist rhetoric and divisive policies," Rep. Adriano Espaillat, D-N.Y. added. "Today's dismissal of Black lives as a result of [police brutality] serves as further proof of his inhumanity, hate & racist beliefs."