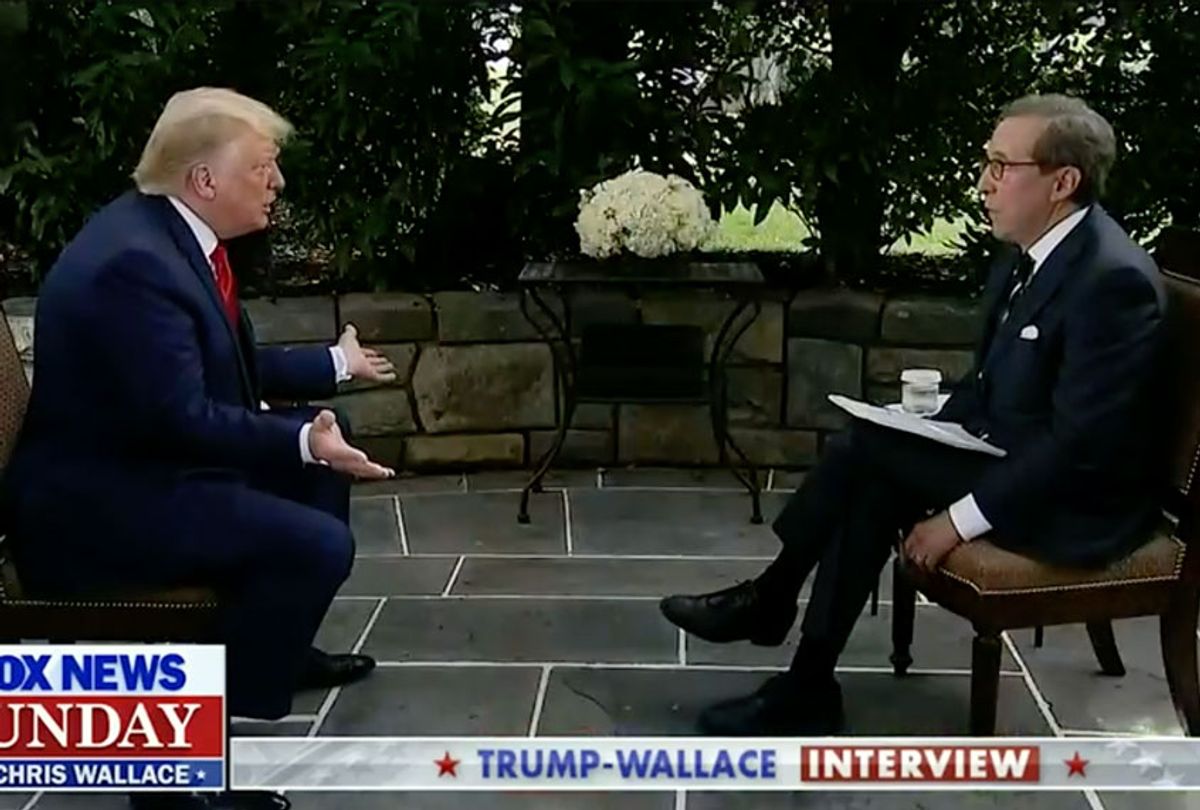 In her tell-all book about being Donald Trump's niece, "Too Much and Never Enough", psychologist Mary Trump tells a story of how her grandfather and the president's father, Fred Trump, would handle it when his tenants wanted the basic landlord services they were entitled to.

When one tenant repeatedly called the office to report a lack of heat, Fred paid him a visit. After knocking on the door, he removed his suit jacket, something he usually did only right before getting into bed. Once inside the apartment, which was indeed cold, he rolled up his shirtsleeves (again, something he rarely did) and told his tenant that he didn't know what they were complaining about. "It's like the tropics in here," he told them.

Donald Trump clearly learned the art of gaslighting from his dear ol' dad, a man so mean-spirited and racist that Woody Guthrie wrote a diss track about him. This belief, that any inconvenient or unflattering fact should be dealt with by pretending it doesn't exist, is the closest thing Trump has to a guiding philosophy. So it's no surprise that as coronavirus cases are rising around the country, due primarily to Trump's own incompetence and malice, his strategy is to simply deny that the virus is a serious threat and do whatever he can to hide the evidence contradicting his lies.

This weekend, what was long suspected became undeniable: Trump believes he can make this coronavirus problem go away by hiding the evidence.

Fox News aired Chris Wallace's interview with Trump on Sunday that was yet another Trumpian train wreck, despite being conducted for a network that primarily serves these days as a spin factory for the Trump administration. Trump tried to brag about passing a cognitive test, implying it was a difficult task, even though, as Wallace noted, it's mostly consisted of tasks like correctly identifying a picture of an elephant and subtracting 7 from 100. Trump also indicated pretty clearly that he has no intention of accepting defeat in the November election, having already set up the conspiracy theory about mail-in voting that he intends to use as justification for refusing to leave office.

But the most immediate point of concern was that Trump demonstrated once again that he is fully committed to hiding the extent of the coronavirus pandemic by juking the stats.

After being shown a chart by Wallace that indicates the rapid rise of viral contagion — a direct result of Trump not simply mismanaging the response but actively interfering with efforts by other officials to slow the spread — the president got defensive.

"If we didn't test, you wouldn't be able to show that chart. If we tested half as much, those numbers would be down," Trump argued.

This is both an echo and an escalation of the argument Trump has made since the beginning of the pandemic, which is that no one would even know about coronavirus if we didn't test for it, and that testing is not an urgent matter of public health, but a conspiracy to tank his chances of re-election.

The problem with this argument, of course, is that even without testing, people are still getting visibly sick and requiring hospitalization at rates so high that ICUs in some areas are being overwhelmed. Furthermore, the death rates are once again rising sharply, as all sensible people knew they would, some weeks after the case load started rising again. Even China, the authoritarian state where the virus started, found that their notoriously effective methods of censorship and controlling information were not enough to conceal the masses of bodies piling up and the overflowing hospitals.

But Trump is nothing if not famously certain that he's the best at everything, no matter how little he knows about any given topic. So after months of Trump telling us that he feels the best way to deal with the coronavirus epidemic is by staging a massive cover-up, his administration is making moves to turn those wishes into reality.

On Saturday, reports emerged that the White House is trying to force Congress to remove provisions from the next coronavirus relief bill that would provide funding to states to continue virus testing. The administration is also trying to block funding for CDC and Pentagon efforts to research and contain the virus.

This report comes on the heels of other reports suggesting that the Trump administration is trying to force hospitals to stop reporting cases to the CDC, and instead wants them to report directly to a program at the Department of Health and Human Services, which will not make the data publicly available in the same way that the CDC does. Reporting about this focused on health officials reeling "concerned" that this was about Trump trying to hide the extent of the pandemic. In light of his public comments and other efforts to prevent testing and data collection, it's safe to say that's by far the likeliest explanation.

Trump's gaslighting strategy, learned from his father and employed throughout his life, has largely worked for him. It worked to cover up his extensive collusion with a Russian conspiracy to interfere with the 2016 election on his behalf. It worked when Trump was impeached for trying to blackmail the Ukrainian president into helping him cheat in the 2020 election, giving Senate Republicans just enough cover to justify voting not to remove him from office. Trump's gaslighting has worked when it comes to his blatant embezzlement of both taxpayer funds and campaign donations.

This strategy works not by actually convincing people to believe Trump's lies, which now average about 12 a day. Rather, it works the same way Fred Trump's gaslighting about the heating worked — by inducing a sense of helplessness in the victim, and by making clear there's nothing the victim can say or do to persuade the gaslighter to recognize reality. Trump yelled "no collusion" like a parrot for months until the public essentially gave in to the lie, in a "Have it your way, just stop screaming at me" reaction.

Trump clearly hopes he can pull the same trick off one more time with the coronavirus, insisting that everything is fine — in the face of all evidence to the contrary — at such length and with such stubbornness that his opponents eventually just give up. It's genuinely surprising he hasn't reworked his "no collusion" catchphrase into some version of "no coronavirus," although we still have three and a half months until the election, so don't rule it out.

The purpose of this repetition is to exhaust the opposition. It gets tiresome insisting that, yes, the coronavirus is a real threat in the face of someone who will never admit that. Hiding the evidence helps, by making those who continue to believe in reality work that much harder and longer to prove their point. Trump wants to wear us down the way his father wore down his tenants, who realized that nothing they could say would compel him to admit that the heat was broken.

The good news, however, is that reality-based folks who believe the coronavirus is a real threat don't have to convince Donald Trump. They just have to convince their fellow Americans. On that front, things are looking good so far. Polling shows that 60% of Americans disapprove of Trump's handling of the coronavirus, and only 38% — roughly the percentage who will never abandon Trump, even if he starts curb-stomping puppies on live TV — approve of his performance. People can see that coronavirus is sweeping through their communities and filling up their hospitals, even if the administration succeeds in making actual case numbers harder to track. The media, especially at a local level, won't stop covering the issue, especially if conditions on the ground keep getting worse. Trump has won numerous victories through his expertise at gaslighting, but he can't trick the virus and his luck may finally be running out.