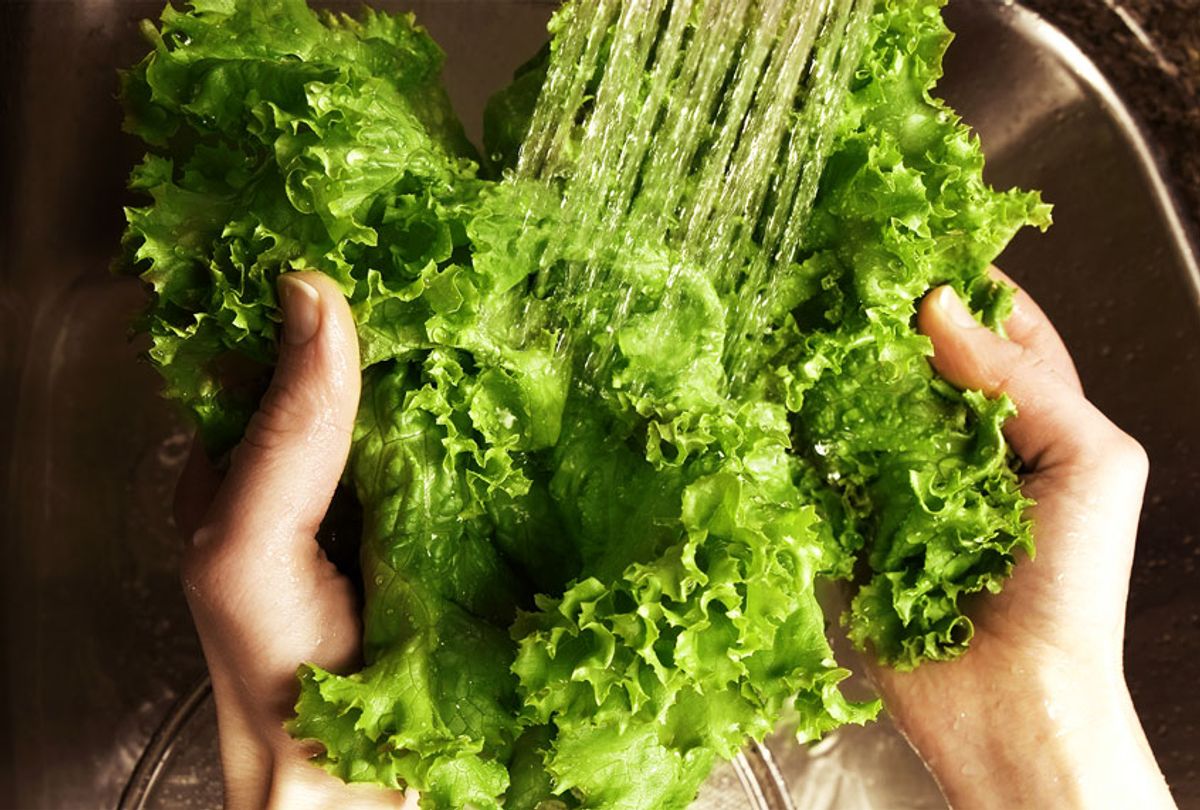 A person washing a head of lettuce (Getty Images)
--

A new study reveals that some strains of Salmonella bacteria have developed methods of not only bypassing botanical immune systems, but of resisting the faucet. The novel strain of bacteria achieves this by squirreling itself deeper within the pores of leafy greens like spinach and lettuce.

The study, which was published in "Frontiers in Microbiology," found that Salmonella enterica Typhimurium can enter plants like lettuce and spinach through their stomates, or the tiny air holes that plants can open and close to breathe and stay cool. A scientific team from the University of Delaware investigated how E. coli, Salmonella and Listeria interacted with stomates on lettuce and spinach. In the process, they discovered that Salmonella appeared able to enter stomates.

Bacteria that has already found its way into the leaves of plants cannot be washed off with water or chemical treatments, and can easily be spread through water systems and human touch.

"Salmonella remains a critical foodborne pathogen given its ability to persist in various environments and hosts," co-authors Nicholas Johnson, Pushpinder K. Litt, Kalmia E. Kniel and Harsh Bais explained. "At greatest risk are those aspects of contamination that can occur within the pre-harvest environment, whereby microbial contamination can come in contact with plant foliar tissues from water, soil amendments, wind, birds, insects, animals, and other fomites including food contact surfaces on-farm and at packaging facilities."

The authors added that direct and indirect mechanisms increase the risk of contamination of plants in the field. "Laboratory studies suggest that bacterial pathogens on plants in the field decrease quickly over the first 3 days, but low numbers continue to persist for several weeks, which may cause human health issues," they note.

As Bais told Science Daily, "Now we have a human pathogen trying to do what plant pathogens do. That is scary."

Kniel elaborated on those thoughts, adding that "the food industry works tirelessly to make the product as safe as they can. But even then, we are growing these products outside, so they're accessible to wildlife, wind, dust, and water that may transmit microorganisms. It's a tough situation."

This is not the first study which has found evidence that Salmonella bacteria is becoming more resistant to human preventative measures. In 2019, the Centers for Disease Control and Prevention announced that a strain of antibiotic-resistant Salmonella had been found in several brands of raw chicken. Ultimately, "a total of 129 people infected with the outbreak strain of Salmonella Infantis were reported from 32 states," including 25 hospitalizations and one death.

In 2018, there were a string of Salmonella infections linked to the consumption of turkeys, caused in part because the United States does not have laws requiring poultry to be free of salmonella. Consumers are encouraged to thoroughly cook poultry before serving it and to avoid washing it in areas like the sink, which can lead to the spread of bacteria.