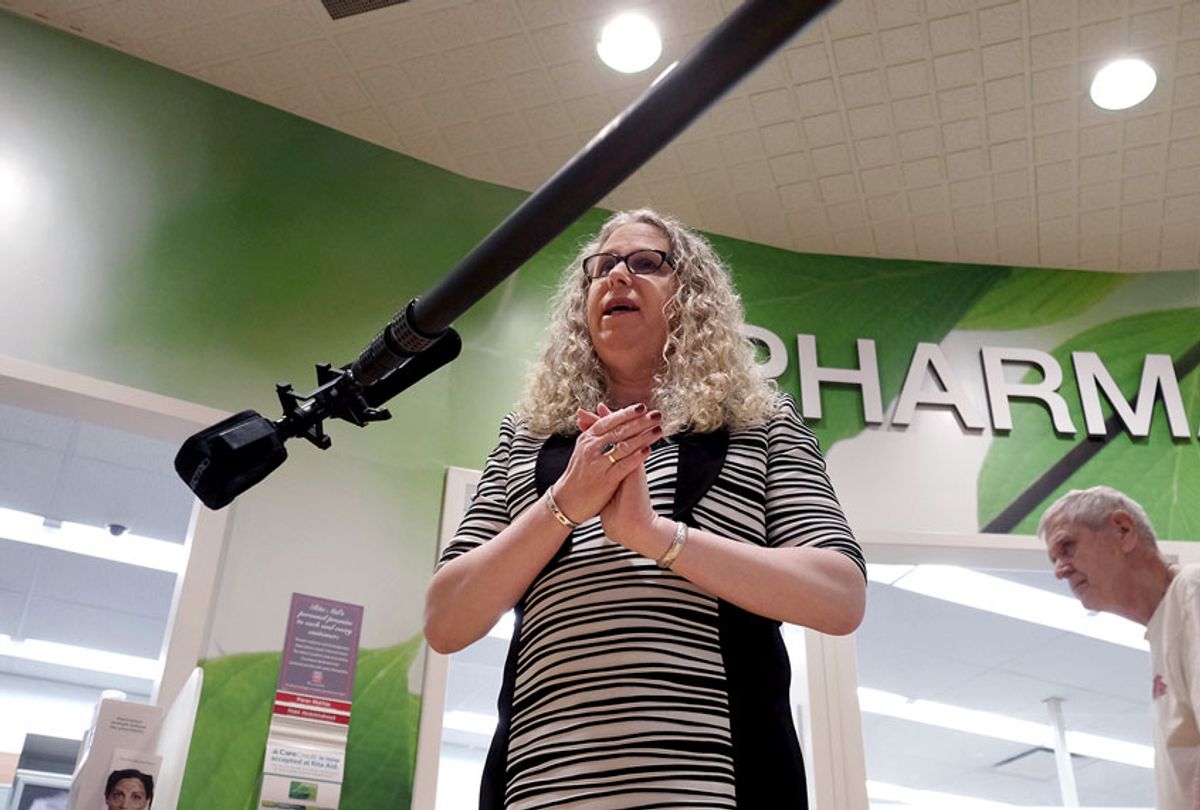 Many Pennsylvanians are outraged after learning that a man seemingly impersonating Dr. Rachel Levine — the state's Secretary of Health and one of the few openly transgender government officials in the United States — participated in a transphobic dunk tank event at the Fireman's Relief Carnival at the Bloomsburg Fair in eastern Pennsylvania on Saturday.

Levine, who has gained prominence in the Keystone State due to her role in addressing the coronavirus pandemic, appeared to have been mimicked by a man wearing a black and pink dress, according to The Morning Call. The images posted on the fair's Facebook page showed the individual in a dunk tank while the author of the page wrote, "Dr. Levine? Thank you. You were a hit and raised a lot of money for the local fire companies. Wonder why so many were trying to dunk you."

Salon reached out to the Bloomsburg Fair for comment and has not received a reply.

Situated in the small town of Bloomsburg, Pennsylvania, just 40 miles southwest of Wilkes-Barre, the Bloomsburg Fair previously gained media attention as a site of far-right fervor. In 2016, a registered sex offender (convicted on child pornography charges) was allowed to sell Nazi flags next to banners expressing support for Donald Trump's presidential candidacy until visitors complained.

"Public displays of bigotry have no place in our public discourse," Adrian Shanker, Founder and Executive Director of the Bradbury-Sullivan LGBT Community Center in nearby Allentown, told Salon by email. "The first responders at the fire company that benefited from this vile transphobic fundraiser at the Bloomsburg fair deserve better. Transgender Pennsylvanians who have had to see a continuous stream of transphobic attacks on the Secretary of Health deserve better, and of course, Dr. Levine deserves better. It is okay for someone to disagree with her policies. But they should do so in a respectful way."

Shanker was not alone among LGBT activists in expressing disgust at the spectacle.

"When transgender people are mocked and portrayed inaccurately, as was done at the Bloomsburg Fair, it directly correlates to a transphobic culture that has killed at least 22 transgender and gender non-conforming people in the U.S. this year alone," Human Rights Campaign Pennsylvania State Director Ryan Matthews said in a statement to Salon. "Dr. Levine is an expert in her field and has worked tirelessly to protect Pennsylvanians during the COVID-19 pandemic. Instead of mocking a person's gender identity, we should focus on protecting our state's most vulnerable from this virus."

Like many other public health officials, Levine has been subjected to harsh attacks from conservatives as she guides Pennsylvania through the pandemic. Along with Gov. Tom Wolf, she implemented a months-long lockdown, advocated a statewide stay-at-home order and helped put in place a color-coded system to aid counties in planning safe re-openings. Levine emphasizes using data and cutting-edge science in shaping state policies responding to the pandemic, even as she has faced criticism from conservatives who prioritize reopening the economy and claim the mandatory shutdowns violate their civil liberties.

Among her pre-pandemic public health policies, Levine is best known for issuing a standing order that allows anyone in Pennsylvania to get the opiate overdose reversal drug naloxone without a prescription; making it easier for Pennsylvanians to alter their birth certificates to reflect their gender identities; and working to guarantee Medicaid coverage for transgender health services.

Levine has faced frequent transphobic attacks throughout her career. Prominent incidents include a Pittsburgh radio personality repeatedly misgendering Levine during an interview, a township commissioner resigning after saying at a public meeting that he was "tired of listening to a guy dressed up like a woman" and the administrator of a small town recreation commission's Facebook page posting a meme saying, "If you are ordered to wear a mask by a guy who wears a bra, you might be Pennsylvanian."

In the aftermath of the anti-Levine dunk tank incident at the fair, Bloomsburg Fair President Randy Karschner released a written statement arguing that "a fellow dressed up in a dress to get people to throw balls at the dunk tank to raise money. It turned into where people thought we were offending Dr. Rachel Levine, and that was no intention at all." The dunk tank mime himself, Main Township Fire Chief David Broadt, claimed he did not set out to impersonate Levine but played along after fair attendees said he looked like her and began shouting, "Where's your mask?"

"I know Dr. Levine professionally and hold her in the highest regard," Dr. Georges Benjamin, Executive Director of the American Public Health Association, told Salon by email. "She has served the people of Pennsylvania well to date on other public health problems like the opioid epidemic. I am unaware of any serious missteps unique to Pennsylvania in her response to COVID-19. She should be supported for the good of the residents of Pennsylvania."

"I'm not from Pennsylvania, but I've reviewed the materials and Pennsylvania has had a good course — with its ups and downs, but on a good course now — regarding COVID-19," Medford told Salon. "We need the best qualified, experienced, and committed experts in public health to help lead us out of this pandemic, and it appears to me that Dr. Levine is well-qualified with an excellent track record to enable Pennsylvania to deal with the highest possible probability of success with the complexities of this pandemic going forward, period."

He also wondered whether the event ridiculing Levine, who is Jewish, may have also been motivated by anti-Semitism, noting that the same fair once allowed a vendor to sell Nazi flags.

"There has been a lot of pressures on public health officials that have no bearing on the execution of their jobs, and transphobia and antisemitism are just two examples of that," Medford said.

Speaking with Salon last month about Pennsylvania's response to the pandemic, Rutgers University political scientist Dr. Ross Baker said that "while Philadelphia certainly has had a large number of COVID-19 patient cases, central and western Pennsylvania have had relatively low rates. Governor [Tom] Wolf has been pretty aggressive in terms of social distancing and mask wearing."

Update: A Bloomsburg Fair official denied on Tuesday evening that the event was meant to be a dig at Dr. Levine. On Wednesday Gov. Wolf issued a statement in which he said, "The COVID-19 pandemic has brought hate and transphobia into the spotlight through relentless comments and slurs directed at Secretary of Health Dr. Rachel Levine, who is a highly skilled, valued, and capable member of my administration and Transgender. The derogatory incident involving the Bloomsburg Fair is the latest of these vile acts, which by extension impact Transgender people across the commonwealth and nation."