Mainstream reporters have gone back to critiquing Trump's tactics, rather than documenting the dark reality 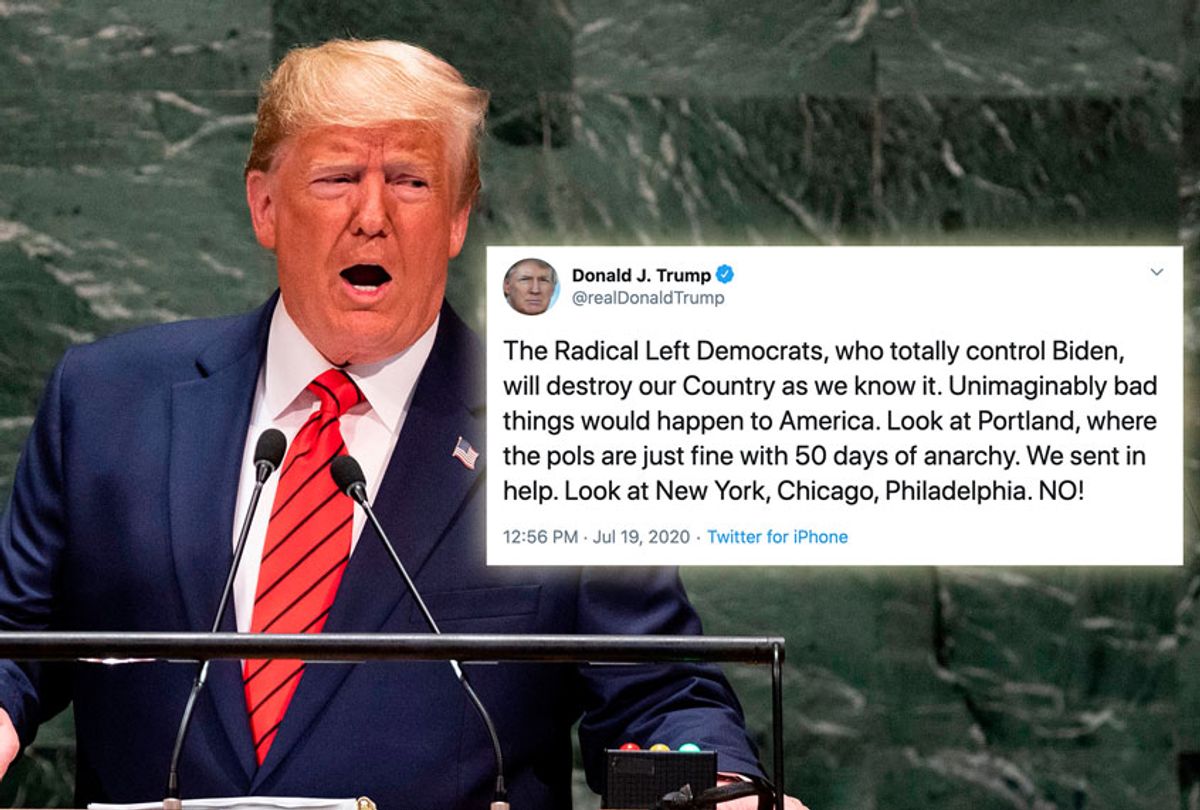 What do you call it when Donald Trump continuously spouts overtly racist and authoritarian rhetoric while obdurately refusing to take the necessary action to stop a raging pandemic?

If you're a campaign reporter for the mainstream media, you call it a tactical mistake. You call it political "self-sabotage." You call it "self-destructive."

It was a classic example of obsessing over tactics rather than substance.

Reporters Ashley Parker, Josh Dawsey and Robert Costa described the problem clearly: "a reelection effort cratering under the weight of a deadly pandemic, a stalled economy and a national reckoning on racial injustice."

But they quickly adopted the view of their sources ("numerous Republicans and Trump allies") that "the main problem facing the struggling Trump campaign" is "the president himself and his chronically self-destructive behavior."

The Post story distinctly echoed the zeitgeist of a June 17 New York Times article by Maggie Haberman and Annie Karni, headlined: "Does Trump Want to Fight for a Second Term? His Self-Sabotage Worries Aides."

Haberman and Karni described "a recent meeting" Trump held "with his top political advisers," during which the advisers "warned him that he was on a path to defeat in November if he continued his incendiary behavior in public and on Twitter."

Trump's response was: "I have to be myself."

But, channeling the views of "people close to him," the Times reporters called that "defiance."

The people close to Trump, the Times reporters wrote, "say his repeated acts of political self-sabotage — a widely denounced photo-op at a church for which peaceful protesters were forcibly removed, a threat to use the American military to quell protests — have significantly damaged his re-election prospects, and yet he appears mostly unable, or unwilling, to curtail them."

Can you imagine writing off Trump's triumphant march through Lafayette Park as a tactical mistake rather than a willful act of thuggery? It was an "iconic moment" for the Trump presidency, as Washington Post reporters Philip Rucker and — guess who? — Ashley Parker herself wrote at the time: a "created" moment with "outsize symbolism for a nation broken after yet another black man died in the custody of police."

It was such a dramatic and freighted event that I even thought it had permanently pierced the detachment of the reporters covering it.

But apparently the hoary political-campaign-coverage algorithms snapped back into place.

In the context of campaign reporting, Trump's epic failing as a president and a human being are just value-neutral challenges for the campaign staff, apparently.

And it's not just the Post and the Times. Los Angeles Times reporters Eli Stokols and Noah Bierman wrote last week that, according to "numerous" anonymous campaign staffers, "those involved in the reelection effort are increasingly resigned to getting behind their often self-destructive candidate."

Julie Pace wrote for the Associated Press on Friday that "[t]he issue that needs to be addressed, according to some Republicans, isn't how Trump's campaign is run. It's Trump himself."

But what exactly is it about Trump himself? Pace's answer is an anodyne, listless cover-up of Trump's criminal incompetence and racism:

Trump has often appeared to be out of step with most Americans in recent months. He all but declared victory over the coronavirus pandemic as infections were starting to surge in new pockets across the country, including in states like Florida, Texas and Arizona where he's enjoyed strong support. He's shown little concrete interest in police reform following the deaths of Black Americans and has instead focused much of his energy on defending prominent displays of Confederate monuments.

Pace noted that "privately, Trump's campaign and outsider advisers acknowledge that the president's situation is dire and showing no signs of improvement." But then she quoted Scott Reed, a senior political strategist at the U.S. Chamber of Commerce, saying the campaign needs a "new and improved level of message discipline that includes the White House staff" — as if that's the problem.

As I wrote last week, it's time for reporters to put aside their normal-campaign-reporting habits and recognize that this is something new and different: A campaign aimed only at a distinct minority of voters that can't win unless it steals the election.

Or maybe, as NYU journalism professor Jay Rosen tweeted, it isn't really a campaign at all.

As Rosen added in a response: "'Still effective for his cult' is not a campaign. It's internal communications among pre-existing supporters. A campaign tries to convert people."

New York Times opinion columnist Paul Krugman chimed in on Friday with a Twitter thread about how we should all be more concerned that Trump will try to steal the election:

New polls show just how profoundly American voters are rejecting Trump. A Washington-Post-ABC News poll shows 38 percent of Americans approve of Trump's handling of the outbreak, down from 51 percent in March, with fully 52 percent disapproving "strongly."

Meanwhile, in the New York Times, the campaign coverage continues, with Trip Gabriel marveling that Ohio is in play. How could it not be? It's long been a presidential bellwether. It voted for Obama twice. Trump was a shock, not a trend.

Notably, Gabriel only quoted three Trump supporters: An adviser to the campaign, a Republican strategist and a racist who self-identified with the quote: "I'm not a NASCAR fan anymore."