What is the fate of Black Lives Matter protest murals?

The plywood that boarded up businesses became artwork, and there's a move to preserve them before they're discarded 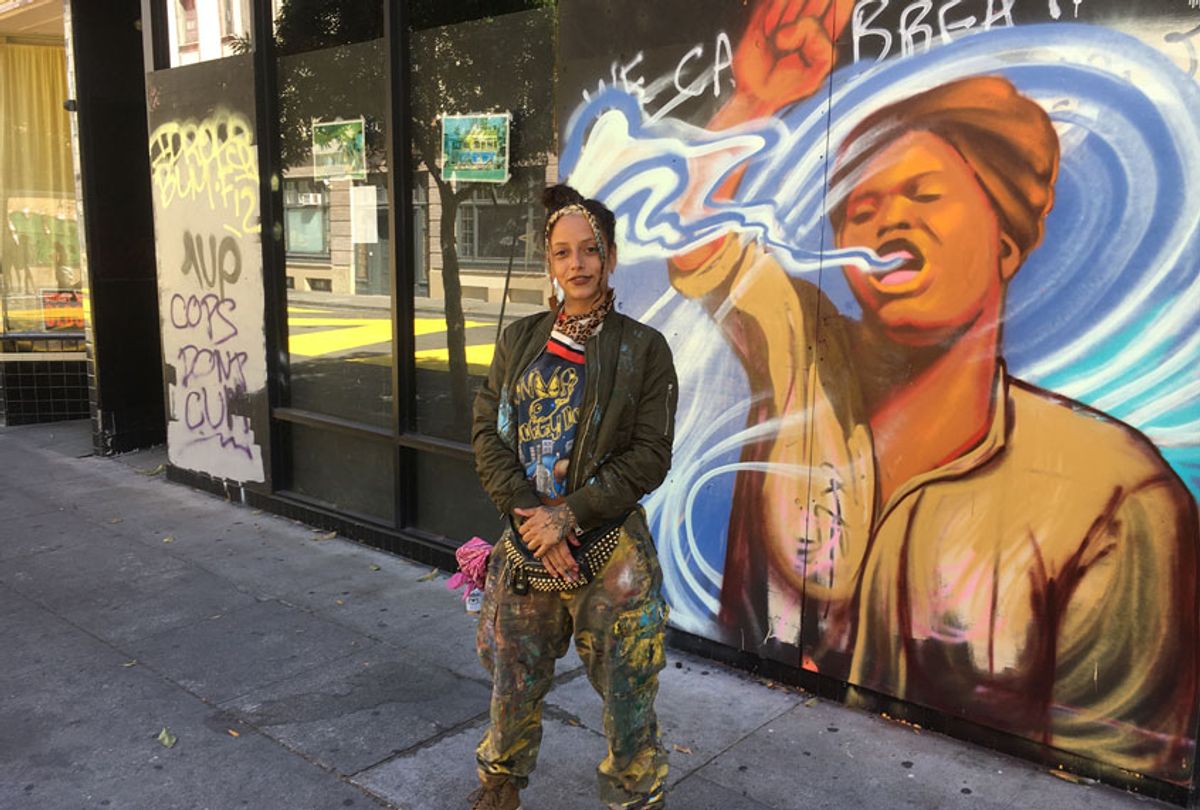 Blane Asrat did not expect to see her artwork plastered across the front page news.

On June 7, she went to downtown Oakland with a friend to help clean up after a protest only to see artists turning boarded-up storefronts into plywood canvases. Asrat, an aspiring illustrator, asked a nearby artist for some paint and began work on a portrait of a protester on the side of the Pacific Range Foods on 12th and Franklin Street. As she painted, onlookers took pictures, and one found its way onto the front page of The Mercury News.

A couple days later, Rachel Wolfe-Goldsmith (another Black artist who's been in Oakland for nearly a decade) helped organize Oakland's Black Lives Matter street mural on downtown Oakland's 15th Street. That day she pulled out the paint she keeps in her car and did an impromptu mural of a Black woman protesting.

Asrat's and Wolfe-Goldsmith's pieces still stand. But eventually, as cities continue to open up, panels will get taken down, leaving artists with some daunting questions: Where will their art go? And who owns it? Artist and gallery owner Randolph Belle of Oakland's Black Cultural Zone (BCZ), an Oakland-based organization dedicated to promoting community projects, said there's a debate about whether the artist or whoever put up the actual plywood has the final say.

Following a tradition of protest murals

In the protests that followed the killing of George Floyd in May, Belle wasn't surprised to see the boarded-up storefronts, but he was surprised by the overwhelming response from artists — often going up spontaneously, guerrilla-style. "People literally just immediately went out there and started painting," he told Salon.

Oakland, which has a sizable Black population, is known for its artistic – and political – culture; a similar art response followed in the wake of Oscar Grant's killing by police in a BART station in 2009.

But Black artists responding in the moment isn't a recent phenomenon.

Tuliza Fleming, a curator of American Art at the National Museum of African American History and Culture, said that the tradition of mural-making as political commentary and expression in African-American communities runs deep, going back to the Harlem Renaissance in the early 1900s. Black artists like Aaron Douglas were some of the first to use murals as a mode to encapsulate the Black experience and to push back against oppression.

In 1967, the Organization for Black Culture (OBAC) collectively painted the "Wall of Respect" on the side of a building in Chicago with 50 portraits of famous Civil Rights figures from Malcolm X to Aretha Franklin, without the landlord's permission. However, the mural was destroyed in a fire in the building in 1971, and the city razed the neighborhood. The mural was lost.

Alongside other Black-led organizations and Black artists, BCZ is working with Oakland Endeavors, Oakland Art Murmur, and the Oakland Museum to de-install panels and store them in facilities throughout the city. And while many museums throughout the country are making efforts to highlight African-American history, the Oakland Museum and other ally organizations are taking their orders from BCZ when it comes to the influx of plywood murals and other street art in the city.

The BCZ is neither curating nor collecting but is currently storing 20 de-installed panels and anticipating more. The group has an online form for businesses, developers, and landlords to identify murals and artwork, and to notify BCZ when the panels get taken down so that the group can track the work, safely store it, and contact the artist(s) about desired next steps.

Oakland Endeavors, one of the organizations working with BCZ (Endeavors also worked with Wolfe-Goldsmith on Oakland's downtown Black Lives Matter street mural) is standing by to store more, along with the other partner organizations.

But not every artist and activist in Oakland wants an organization or institution-led approach. Some locals took matters into their own hands early on.

Following rumors about nonprofits and museums getting ready to de-install and archive art, Guerrilla Pump, an Oakland artist and community organizer, started a Signal chat called "Artist Alliance" for artists to safely discuss the future of their work. Guerrilla then launched a Google form where artists can list their contact information and details about their artwork. The form has gotten responses from 60 local artists so far.

ATTN OAKLAND ARTISTS: The City of Oakland and other "non-profit" art entities in and outside The Town are making plans RIGHT NOW to de-install, "archive" / sell and auction the hundreds of art panels that have been erected during the uprising for Black Lives. There are discussions and decisions being made about The Peoples art work behind closed doors (with THE CITY OF OAKLAND, OAKLAND ART MURMUR, and the OAKLAND MUSEUM OF CONTEMPORARY ART) WITHOUT ANY ARTISTS at the table. We are starting an Artist Alliance so that THE ARTISTS OF THE PEOPLE can connect, organize and be involved in the decisions about what happens to their work. IF YOU HAVE CREATED ART WORK ON ANY OF THE PANELS IN DOWNTOWN OAKLAND please click the LINK IN BIO and fill out the form.

Guerrilla — who said they met with an intellectual property rights lawyer in June — emphasized that while the businesses or other buildings may own the plywood, the images and the artwork belong to the artists.

Similar to Guerrilla's collective efforts to track down work, Oakland Endeavors sent out photographers to document storefront murals and uploaded the photos in an online gallery in early June. They also have a form where artists can reach out to claim work and community members can submit photos of unidentified or newly identified work. Endeavors also said that it plans to add artists' Instagram handles and even Venmo accounts in the hopes of getting artists noticed and paid.

In June, Eve Ortega was walking with her daughter in Foley Square where countless murals had sprung up on plywood boards there and throughout lower Manhattan. Worrying about the art's future, she reached out to a few local arts organizations and founded The Plywood Project, a nonprofit partnered with already existing organizations and initiatives to commission and preserve street art and murals by Black and POC artists.

She thinks it's important that this is a grassroots movement, with artists at the forefront.

"We're in a moment that is long overdue of really questioning power structures, and the lens is understandably racial," Ortega said, "That lens now is forcing us to look at all the ways in which power is skewed."

While the Project's initial plan was to commission new work for the plywood boards — on July 20 Plywood (along with partners like Street Theory) installed a new plywood mural by Brooklyn-artist Sophia Dawson that reimagines a childhood photo of police-killing victim Eric Garner — it's also trying to protect existing work. This week, along with the Artists Rights Society, The Plywood Project will launch an open source Google document where artists can upload information about their work in an effort to protect their intellectual property.

Over in the country's capital, following some artists' initial response, the Downtown D.C. Business Improvement District had 42 artists and volunteers come out to paint plywood murals downtown on June 7. The result was 31 pieces that were then displayed in an outdoor exhibit in Gallery Place. Only nine still stand; as businesses start to open, plywood will continue to come down.

Unlike Oakland, D.C. museums haven't waited to acquire the art. So far pieces have been donated to the National Building Museum, the SAAM, and the soon-to-open Planet Word Museum. The National Museum of African American History and Culture at the Smithsonian has also expressed interest.

It's an ongoing effort in many U.S. cities, but Oakland, with its predominantly Black and grassroots-led approach, seems to offer a more cohesive model.

While the guerrilla-style response from artists has slowed, many cities are working to commission murals on businesses and other spaces. Endeavors Oakland has worked on four approved murals with Black artists so far, with the hope to commission more.

One is an upcoming mural on Tribune Tower by Wolfe-Goldsmith that depicts the Black woman as goddess.

"It's not important whether it's a guerrilla movement or not," she said. "It's important that the artwork continues to make people uncomfortable."

Asrat feels the work is meant for the public eye. "The power of any mural really is that it becomes a part of a neighborhood," she said, "and a neighborhood is the place where any movement starts." Asrat is also collecting Black artists work on her website Picture Blackness.

According to Guerrilla, all of the artists in their ongoing Signal chat have different ideas about where they want to see their art end up. Some want it in a museum, some want to bring it home, and others don't have an opinion. If Guerrilla had it their way, the artists would come together and burn their work in a symbolic statement. "It would've given artists ownership of their work and it would've shown everyone that you can't own s**t that's not yours."

The panels' final home is still to be determined. Some of them may appear in an outdoor exhibit at an East Oakland lot that BCZ is currently using for food giveaways and other community projects. Regardless, this effort could extend the lifetime of many of these reactionary, in-the-moment murals. But Belle is primarily focused on protecting Black artists and keeping the movement going.

"We have to be very, very efficient in this because we don't know how long this moment is going to last," Belle said. A resident of Oakland for 30 years, he's seen this kind of rush for change before and knows how ephemeral it can be.

The younger generation, however, is determined to effect change.

"Our generation is done," Wolfe-Goldsmith said. "We're not going to continue to live in the same system that we've been living in."