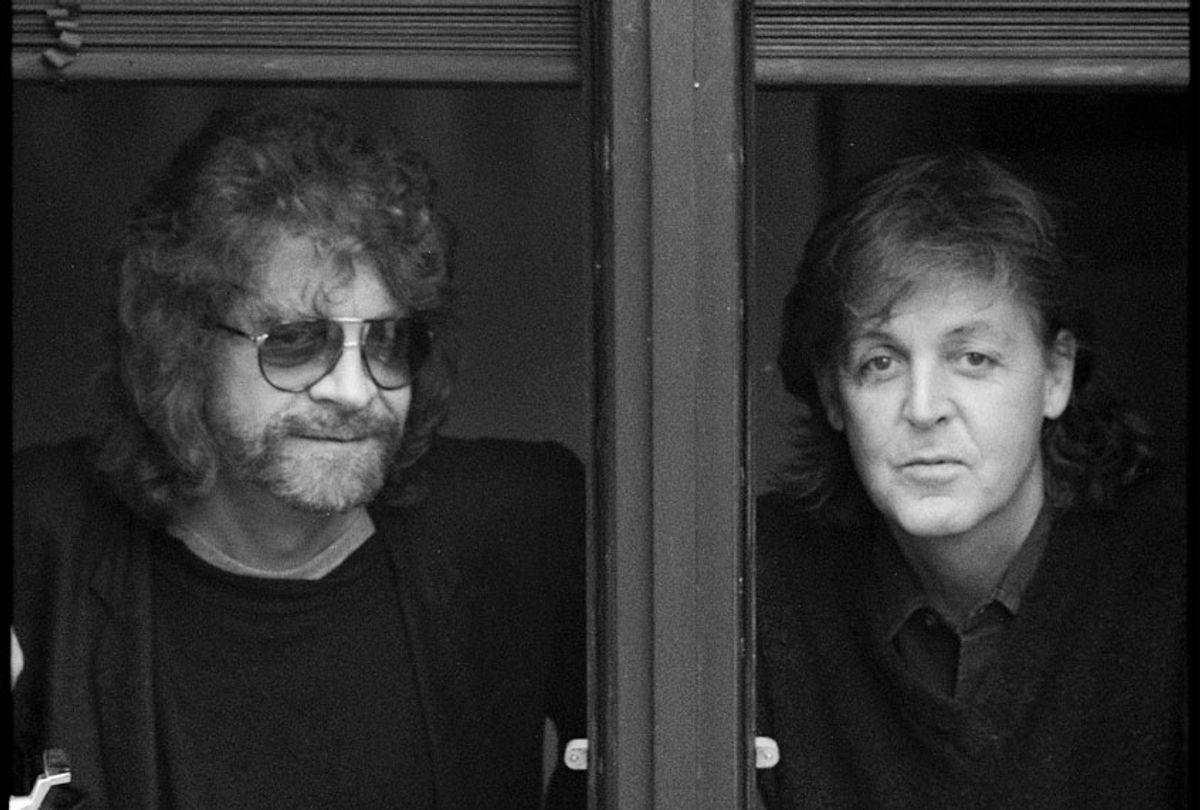 In 1960, John Lennon's art school friend Stu Sutcliffe coined the Beatles' name (originally, as Beatals) in tribute to Buddy Holly and the Crickets. By 1961, Lennon had grown tired of explaining the roots of the group's name, with its manifold permutations. In a humorous story for Mersey Beat, he famously claimed that the word had come to him "in a vision—a man appeared on a flaming pie and said unto them, 'from this day on you are Beatles with an A.'"

For his tenth solo album, Paul McCartney drew his title from Lennon's whimsical story, honoring his fallen mate and christening his most sentimental post-Beatles release in the same breath. This month, "Flaming Pie" enjoys deluxe treatment as the latest installment in the Paul McCartney Archive Collection, complete with a host of unreleased demos, bonus tracks, and outtakes.

The 1997 LP sounds as luminous as ever, thanks to Jeff Lynne's original sterling production and to one of McCartney's most well-rounded collections of new material since, arguably, 1982's "Tug of War." The album features guest appearances from a wide array of musicians and personalities associated with the Cute Beatle's career, including Lynne, who had recently produced the Beatles' "Free as a Bird" and "Real Love" singles for the Anthology project, along with wife Linda, son James, Ringo Starr, George Martin and Steve Miller.

The heartfelt nature of the project is understandable. For one thing, producer George Martin was visibly slowing down — his orchestration for "Somedays" would mark one of his final projects leading up to 2006's "Love." Meanwhile, McCartney celebrates the life of Starr's late ex-wife Maureen in "Little Willow," as well as his incipient friendship and early songwriting with Lennon in "The Song We Were Singing." Most importantly, McCartney was confronting the specter of wife Linda's mortality. She had first been diagnosed with breast cancer in 1995, and by the advent of "Flaming Pie," her cancer had metastasized to her liver. She would succumb in April 1998 at age 56, leaving her husband wounded and bereft in his grief. For nearly 30 years, she had been his beloved partner and collaborator.

With its inclusion in the Paul McCartney Archive Collection, "Flaming Pie" burns ever brighter. McCartney's pop sensibilities are still in vogue, as ably revealed in "The World Tonight," "Beautiful Night," and the title track. Music lovers will enjoy the opportunity to trace the LP's production from the demo stage through the studio and production phases. In contrast with previous entries in the collection, "Pie" is a completist's dream. Nearly every track is represented by its original home recording, along with McCartney's acoustic and rough mixes, followed by Lynne's production work at the Mill, McCartney's home studio in Hogg Hill Mill, Sussex.

The success of each and every entry in the Paul McCartney Archive Collection is determined by the quality of the original release, and in this case, "Flaming Pie" doesn't disappoint. Released in McCartney's 55th year, the LP finds him at an understandably nostalgic, albeit painful crossroads. Life with Linda was clearly growing more precious by the day — "Flaming Pie" would mark the last time she recorded backing vocals for her husband's work — and the recent Beatles Anthology retrospective was an unmistakable harbinger of time's relentless passage.

"Flaming Pie" also finds McCartney's voice beginning to show his age. From the Beatles' mid-period through the early 1980s, his pipes were one of pop music's most enduring and steadfast treasures. But even with the perceptible marks of time, McCartney's vocals on "Flaming Pie" exhibit a unique tenderness among all of his solo efforts. Take "Calico Skies," one of the most moving entries in his voluminous catalogue. "I will hold you for as long as you like," he sings. "I'll hold you for the rest of my life." In a single couplet, the heart and soul of his corpus is delivered in beautiful, unvarnished style.