“We don’t need artistic reminders of how unjust, unfair and dehumanizing our society is — we just don’t” 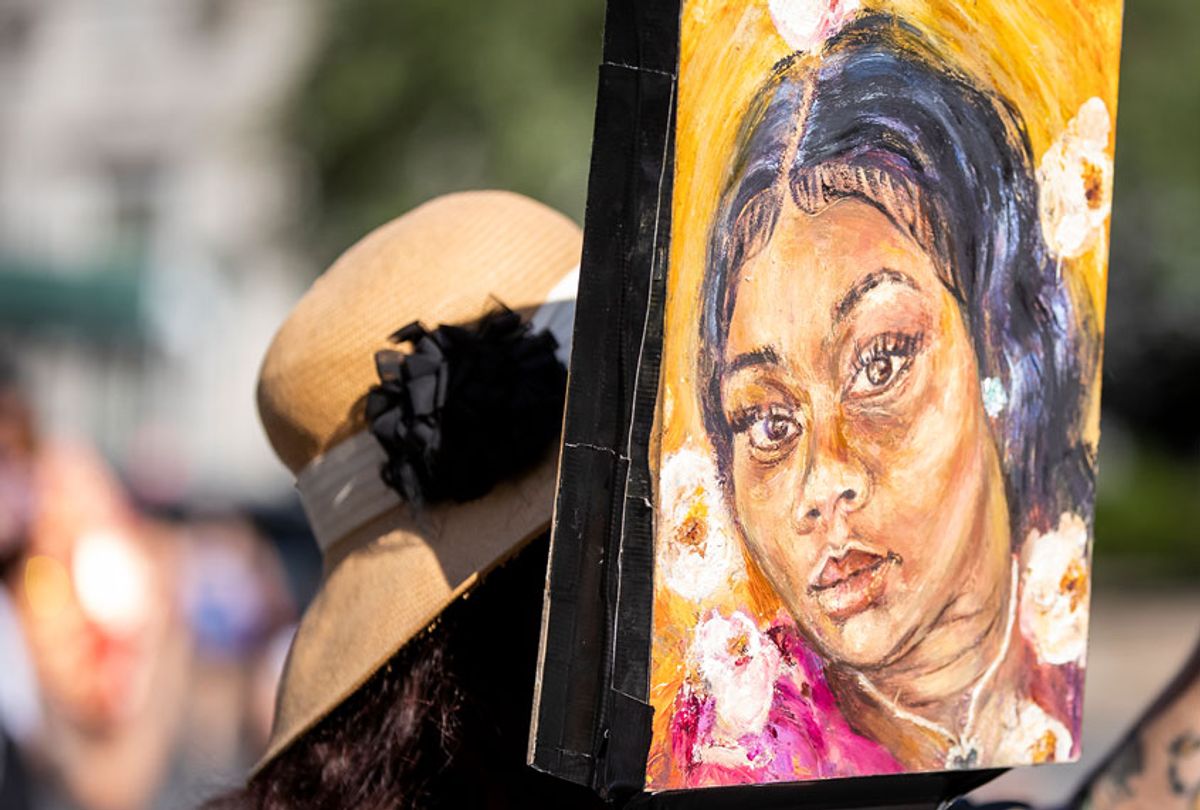 Samaria Rice — the mother of Tamir Rice, the 12-year-old Black boy who was killed in Cleveland in 2014 by a white police officer — has said that she wakes up every day not knowing how or where she is going to see her son's death depicted by artists.

"I'm not normal because of what America has done to my family,'' Rice said in a recent interview with Cleveland.com. "I'm just dealing with it. I can't even have my son in peace. That's what it feels like."

Earlier this summer, the Cleveland Museum of Contemporary Art canceled "The Breath of Empty Space," a planned exhibition by New York artist Shaun Leonardo. The solo show, which interprets the police killings of unarmed Black and Latino men and boys, would have featured charcoal illustrations based on the surveillance video of Tamir Rice's death; it also included depictions of Michael Brown, Eric Garner, Rodney King, and Laquan McDonald.

According to the New York Times, Leonardo, who identifies as Afro-Latino, accused the museum of  censorship. However, Jill Snyder, the museum's director, said she had been approached by local Black activists and museum staff who communicated that "this work stirs the trauma back up for the very community that it is intending to reach, and also that there is a way in which institutions like moCa Cleveland put that pain and trauma on display disrespectfully and somewhat gratuitously — that there is a performative aspect to our presentation of it."

Samaria Rice told Cleveland.com she found the exhibition to be "so messed up."

"This is absurd to want to use this as art," she said. Rice has since requested that Leonardo no longer display his charcoal illustrations of Tamir's last moments; the images are still currently displayed on Leonardo's website.

As protests surrounding the recent killings of George Floyd, David McAtee and Breonna Taylor continue all across the country, renewed attention is being paid to these artists whose work deals with violence against Black individuals and police brutality. However, questions continue to be raised by activists and members of the arts community about whether the final moments of victims' lives should ever become images for public consumption, framed and hung on the museum walls.

Dr. Kaila Story is a professor at the University of Louisville who studies the intersections of gender, sexuality, and race, as well as the co-host of the Strange Fruit podcast. She says that she is always hesitant to celebrate artwork that depicts violence against Black people — especially when it is created by white artists.

"My first question is always about what genuine interest does a white artist have and depicting Black people through the lens of state violence," Story said. "And to me, the interest seems to be not to pay homage to these people or the person depicted. But it's more about the cachet, the notoriety, the thoughts of fame that might come from illustrating Black folks in this way — because it would be considered timely, cutting-edge or controversial, right?"

One such example of this is when Dana Schutz, a white American artist, decided to paint the mutilated face of Emmett Till, a 14-year-old Black boy who was lynched by two white men in Mississippi in 1955. The abstract rendering was based on a widely reproduced photograph of Till's corpse in his casket.

"I made this painting in August of 2016 after a summer that felt like a state of emergency — there were constant mass shootings, racist rallies filled with hate speech, and an escalating number of camera-phone videos of innocent Black men being shot by police," Schutz told Artnet. "The photograph of Emmett Till felt analogous to the time: what was hidden was now revealed."

The painting was selected to be part of the 2017 Whitney Biennial, sparking immediate controversy. Protesters — including performance artist Parke Bright — entered the gallery and blocked the painting from view and demanded its removal from the museum because "the subject matter is not Schutz's" and the experience of "Black suffering" was not hers from which to gain notoriety.

And while Schutz later clarified that the painting would not be sold, a number of Black artists and activists questioned her motivations in making it in the first place. In an open letter to the Whitney, visual artist Hannah Black wrote: "This painting should not be acceptable to anyone who cares or pretends to care about Black people, because it is not acceptable for a white person to transmute Black suffering into profit or fun, though the practice has been normalized for a long time."

"You can have empathy and you can want justice for Black people and freedom for Black people, without having to depict the ways that they are disregarded and dehumanized," Story said. "My question would be for [Schutz]: Why not do your regular paintings and then if you have a discussion about your regular work, talk about the anti-Blackness that exists in our world?"

Story also said there is a real problem of white artists not interrogating the lack of diversity in the art world itself, as well as the physical spaces where their art is on display. "They're creating art in a vacuum," she said.

This can lead to museums feeling like a "white space," a term defined by Yale sociologist Elijah Anderson as public and private spaces that are occupied by predominantly white individuals. Anderson wrote that Black individuals may often consider these spaces to be informally "off-limits" for them. This, he wrote, results in spaces where people of color are typically "absent, not expected, or marginalized when present."

Following the 2015 opening of the Whitney Museum of American Art, First Lady Michelle Obama linked "white spaces" and arts institutions during her comments for the dedication of the building:

You see, there are so many kids in this country who look at places like museums and concert halls and other cultural centers and they think to themselves, well, that's not a place for me, for someone who looks like me, for someone who comes from my neighborhood. In fact, I guarantee you that right now, there are kids living less than a mile from here who would never in a million years dream that they would be welcome in this museum. And growing up on the Southside of Chicago, I was one of those kids myself.

Story wonders if Leonardo's exhibition or Schutz's Whitney Biennial piece would have gotten greenlighted in the first place if this perception of "white spaces" did not exist.

"I do think that if there had been more Black folks involved in the chain of museum command for these particular artists' exhibits, at least the artists would have been more thoughtful about how they focused on the last moments of their subjects," she said.

This isn't to say that museums should shy away from including work that deals with tough and timely issues like police brutality and anti-Blackness. Current curators and museum leaders do however have to be prepared to engage with their visitors in conversations that are equally difficult and timely.

Miranda Lash was the co-curator of "Southern Accent," a contemporary art exhibition that featured over 60 artists' work that questioned and explored the complexities of the American South. It opened at the Nasher Museum of Art at Duke University in 2016 before traveling to Speed Art Museum in Louisville, Kentucky.

The exhibition featured Kara Walker's 2005 short art film, "8 Possible Beginnings or: The Creation of African-America." Walker is known for her haunting and subversive silhouette images of African American stereotypes; this film put them in motion.

"Projections of blacks on a slave ship are intercut with daguerreotypes from the period, showing the journey across the Middle Passage," wrote Hilton Als for The New Yorker in 2007. "A great black head rears up and swallows some black stick figures: the motherland. A black male slave has sex with a puny white slave owner, but only after fellating himself, to the sound of cheerful antebellum ditties. The black male slave gives birth to a child, one of various smiling Topsy-like angels who hover throughout the movie."

In one of the final scenes, Walker has rendered an enslaved man hanging from a tree, while a young Black woman flees, pursued by a white man. Walker and her daughter quietly state: "Maybe all of this will dream away, and I will disappear."

Lash said it was important to present that piece within the proper context, complete with descriptive labels that let viewers know what they were about to see, as well as appropriate supplementary programming. Additionally, Lash had in-depth discussions with the Anne Braden Institute for Social Justice Research — an education and research center at the University of Louisville that focuses on building a "bridge between research and action for racial and social justice — that informed docent trainings.

The same types of preparations took place when the museum presented "...while the dew is still on the roses...," a solo exhibition by Kingston-born artist Ebony G. Patterson, whose intricate weavings and textiles address issues of violence against young Black men, as well as topics of youth culture and masculinity.

"I felt comfortable with showing the work because it included a lot of context," Lash said. "There were labels. The artist was more than willing to talk about the work. We recorded videos of her talking about it. She did live talks in the galleries, for the public, for students for docents. We recorded panels, and there was a catalogue. I felt there was ample opportunity for people to delve into the artist's intentions and understand why she was doing it a certain way and understand it as an artist's interpretation of a difficult subject matter."

That said, Lash also feels there are certain images that aren't necessarily right for public consumption. She brings up how Emmett Till's casket is now on display at the National Museum of African American History and Culture.

"And the position of the coffin is in such a way that viewers can't see the body," she said. "And that just really made this impression on me that there are some spaces, either literally or conceptually, where the eye must stop."

Kaila Story agrees. She would also encourage more museums, especially now, instead to consider displaying artwork that is celebratory of the Black experience, like Amy Sherald or Kehinde Wiley.

"As Black people, we know every single day how anti-Black this world is," she said. "We don't need artistic reminders of how unjust, unfair and dehumanizing our society is — we just don't."