Though the video drew comparisons to Portland, the NYPD said no federal authorities were involved in the arrest 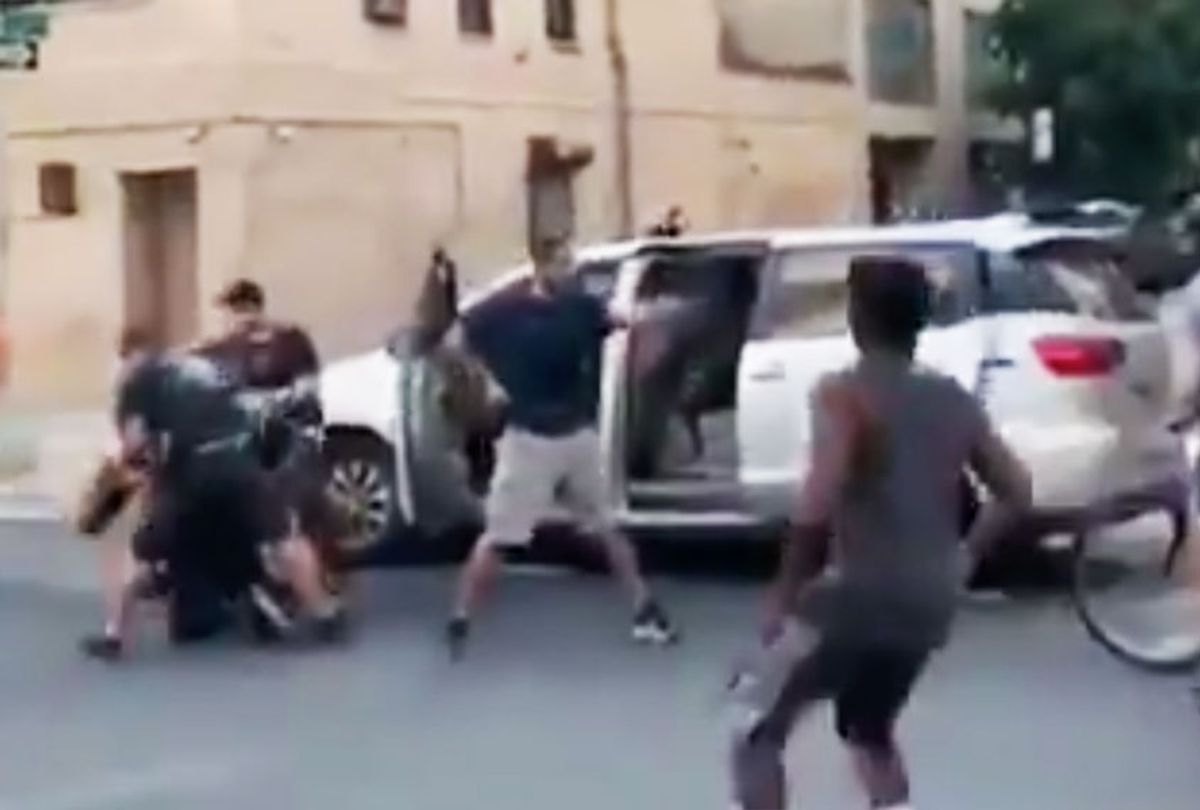 Plain-clothes NYPD officers pulling a protester into an unmarked van at the Abolition Park protest in NYC. (Twitter/@MichelleLhooq)
--

As the New York Police Department defended a viral video showing plainclothes officers forcefully detaining a trans protester in an unmarked van, the agency admitted that it has used similar vehicles to apprehend suspects for "decades."

A video posted Tuesday to Twitter by the independent journalist Michelle Lhooq shows men in shorts and T-shirts grab the trans protester and wrestle her into an unmarked van. About 15 seconds into the video, marked officers on bikes arrive to set up a perimeter around the van as the plainclothes officers rush to drive away. The incident took place in the Kips Bay neighborhood of Manhattan.

The protester was identified by her friends as an 18-year-old homeless trans woman named Nicki Stone. Stone was charged with multiple counts of vandalism and criminal mischief for allegedly spraying graffiti on police cameras and other locations around the city, Gothamist reported.

"Suddenly, there was an unmarked grey van that moved out in front of us that had been waiting for us," a protester named Derrick told the outlet. "Four guys jumped out and a line of police bicycles came out from down the block — we hadn't seen them. They pushed us back. They grabbed Nicki like she was a rag doll . . . They had her arms on her neck, and then they drove off. They're targeting our leaders – that's what's going to happen now."

The video drew widespread criticism. The Human Rights Campaign called it "deeply troubling." The American Civil Liberties Union said the video showed the protester was "abducted off the streets by unmarked 'officers.'"

"These dangerous, abusive, and indefensible actions must stop," the ACLU on Twitter. "Law enforcement must be held accountable."

Though the video drew comparisons to the federal officials deployed to Portland who have snatched protesters into unmarked vans ostensibly as part of President Donald Trump's executive order to protect monuments and federal property, the NYPD said no federal authorities were involved in the arrest.

"A woman taken into custody in an unmarked van was wanted for damaging police cameras during 5 separate criminal incidents in & around City Hall Park. The arresting officers were assaulted with rocks & bottles," the NYPD said, though the video does not appear to show officers being assaulted with neither rocks nor bottles.

"The Warrant Squad uses unmarked vehicles to effectively locate wanted suspects," the statement added. "When she was placed into the Warrant Squad's unmarked gray minivan, it was behind a cordon of NYPD bicycle cops in bright yellow and blue uniform shirts there to help effect the arrest."

Alex Vitale, the coordinator of the Policing and Social Justice Project at Brooklyn College and the author of "The End of Policing," refuted the NYPD's explanation.

"Those officers arrived after a violent arrest by non-uniformed officers in the middle of an active [protest]," he wrote. "This was a reckless and dangerous provocation."

Three witnesses who spoke to Gothamist also disputed the claim.

"None of that happened whatsoever," protester Clara Kraebber told the outlet. "We literally turned the corner and were met with a line of police who attacked us without warning."

Ali Bauman, a reporter at CBS New York, also questioned the explanation, asking why the NYPD would "not tell reporters where the woman was taken or where she is being processed."

New York City Councilwoman Carlina Rivera later tweeted early Wednesday morning that the protester had been released. Rivera called for an independent review of the arrest and "an immediate explanation for why an unmarked van full of officers was anywhere near a peaceful protest."

"It's clear that using an unmarked van and plainclothes officers to make an arrest for vandalism (in the middle of a peaceful protest) is a massive overstep," she added. "I'm exploring legislation."

Similar incidents have been seen in other cities. The San Diego Police Department launched an internal investigation after a viral video showed armed men, who did not identify themselves, detaining a young woman in an unmarked van outside of a high school last month. The SDPD said the men were plainclothes officers but refused to release any details of its investigation.

New York City Mayor Bill de Blasio has not commented on the video, and a spokeswoman referred questions to the NYPD statement. But other city leaders publicly questioned the arrest.

Organizers told The Times that the woman was arrested in connection with the clearing of an encampment outside City Hall, where demonstrators called for the city to defund the police. De Blasio touted that the City Council had voted to cut nearly $1 billion from the NYPD budget in response to demonstrations last month, though activists have called that claim a "lie."

New York criminal defense attorneys on Wednesday decried the arrest but noted that the tactic used in the video was not uncommon.

"This is not a new policing strategy - I mean, maybe for protests, but this is how NYPD polices Black and Brown neighborhoods," said civil rights attorney Rebecca Kavanagh. The reaction to the video, she said, was "white people waking up to a reality Black and Brown people have lived for decades."

"The thing about all the outrageous acts of police violence, nonsensical arrests and holding people indefinitely that have been shocking everyone in the news is that... it's always been happening," agreed Olayemi Olurin, a New York City public defender. "This is how they always conduct themselves. You just don't hear about it."