In director Sue Kim's short film, the drive of "Speed Cubers" to solve the 3-D puzzle forges a unique friendship 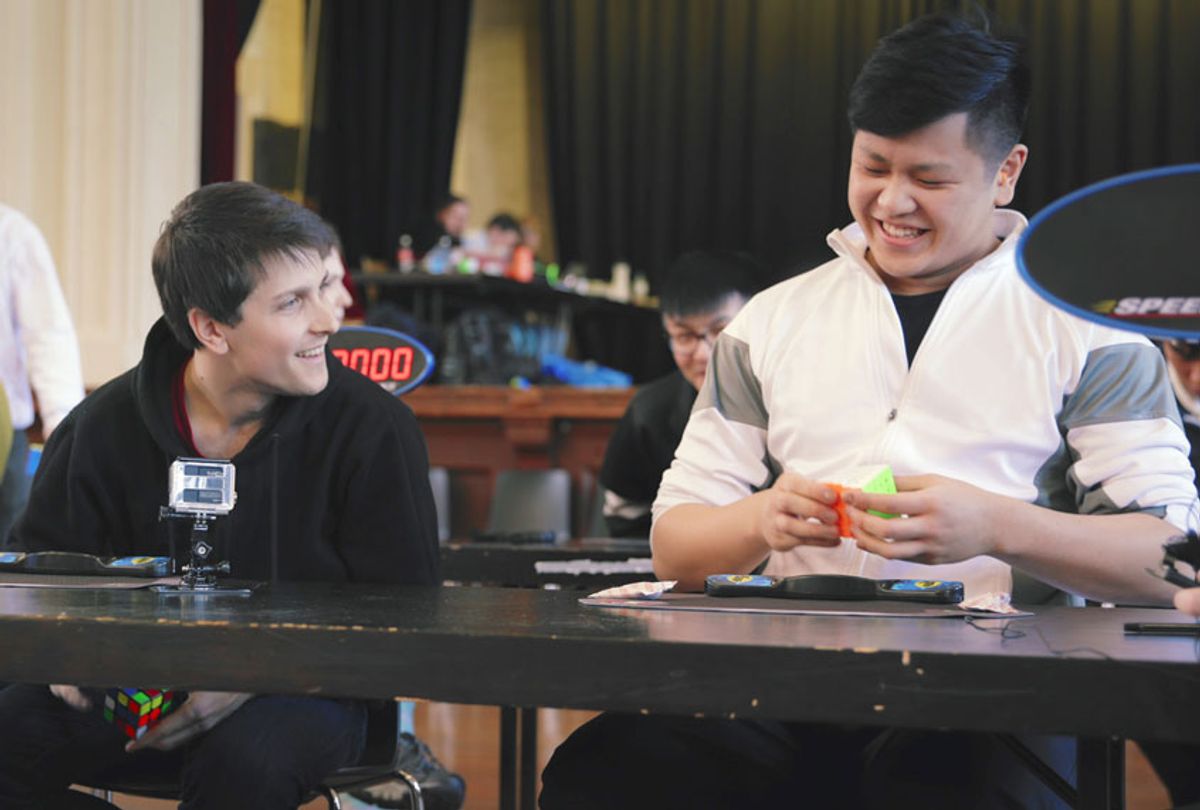 Feliks Zemdegs and Max Park in "The Speed Cubers" (Netflix)
--

For some, trying to solve a Rubik's Cube is a way to pass the time – without the guarantee of satisfaction. For competitive "speedcubers," solving the 3-D puzzle is a given, with the goal of achieving increasingly faster times to break records.

Solving is all that and more to Max Park, an American competitor who stole the World Championship title in 2017 from Australia's Feliks Zemdegs, who had previously held back-to-back titles. Sue Kim's absorbing and surprisingly sweet documentary "The Speed Cubers" – one of Netflix's many July offerings – chronicles the rise of both of these young puzzle masters, their genuine friendship, and their highly anticipated face-off in 2019.

The beginning of the 40-minute short has no dialogue, but the images from the World Rubik's Cube Championships in Melbourne are evocative. As glowing red numbers of a digital clock advance through seconds and milliseconds, competitors sit at long tables, laser-focused as their fingers fly and solidify the colors on each side of the cube. Solved, mostly in about 7 seconds – but less in the case of Feliks and Max.

How do they do it? In the film, Portland State University statistics professor Kit Clement explains the general method: the speedcubers learn algorithms (sequences of movements) to shift specific squares to different locations on the cube. If you string together the right algorithms, you solve the cube. Simple, eh?

Champions have the ability to memorize some 300+ algorithms and put them into practice. You can see it at work in this video in which Feliks first studies the patterns on the cube, and then makes a sub-5 solve, i.e. he solves the cube in less than 5 seconds.

In the film, it's fascinating to witness solve after blurry solve because no matter how many times we see it, it's hard to follow what's going on in Feliks' or Max's heads, much less their fingers. We can only imagine the mental nimbleness required to assess the patterns in seconds and translate that into dexterity born of muscle memory; this is not the work of an Average Joe's brain.

It shouldn't come as a surprise then that some neuro-atypical people would be drawn to speedcubing, as is the case with Max. While "The Speed Cubers" first delves into Feliks' childhood, showing early footage of him proudly featured on the local news for his cubing feats, the film shifts to reveal the less straightforward way that Max came to cubing.

Diagnosed with autism as a child, Max had difficulty engaging with his parents, not to mention other people. Solving Rubik's Cubes became an activity that his mother Miki taught him in order to bond; he was instantly hooked. But while his speedcubing skills improved, his social skills were lagging behind, and the competitions offered unforeseen lessons in life experience: how to act in public, how to make friends, and most importantly, how to deal with failure.

Central to that development is Feliks. As a two-time World Champion and multiple world-record holder, he was Max's cubing idol . . . and eventually became both rival and friend. But he also became a mentor or older brother of sorts. Feliks would always congratulate Max by text whenever he broke a record, even if it was Feliks' own. He became a big part of how Max navigated leisure activities and the stressful competition atmosphere.

Kim found and amplified this story beneath what might have become just another documentary highlighting a niche competition and its fans. She could have focused more on the oddball categories – like solving cubes one-handed, blindfolded . . . or with your feet. Instead, "The Speed Cubers" is an origin story of two champions and their unexpected friendship. Sure, you can root for either competitor going into the 2019 World Championship, but more importantly, the viewer is invested in an outcome that will make everyone as happy as possible.

Watching this short made me even more acutely aware of how much I've been missing the Tokyo Olympics, which had to be postponed this year due to the novel coronavirus. But to fill that void, I haven't been watching old competition highlights or opening ceremonies. Instead, I've been consuming podcasts like ESPN's "30 for 30" gymnastics miniseries "Heavy Medals" or even the non-Olympics series "The Competition," which follows various real-life contests from the Cliburn International Piano Competition to the Los Angeles Mr. Leather contest. Both podcasts are deep dives that contextualize what competitors experience.

But back to the Olympics. Yes, the thrill of competition and watching feats of strength and agility are enough reasons to tune in, but the truly compelling aspect is the storytelling. The packages that reveal the character and personalities of the athletes are essential narratives that creates heroes and underdogs. I may know nothing about artistic swimming or sport climbing, but give me a few pointers and a horse to back, and I'm in.

Most successful sports or competition narratives know this and make the stories personal, but "Speed Cubers" also makes the fantasy of having two friends on opposite sides of the globe into a reality. As with the Olympics, the bigger narrative is about global cooperation and empathy, that we are aligned in celebrating people who are alike in their pursuit of greatness no matter what country they're representing. Despite past terrorist attacks and the scandals, the Olympics represent a time of international amity. Seeing the various competitors – from Germany, Australia, Korea, America – in "Speed Cubers" swarm around each other like reunited pals at summer camp also lets the viewer in on that easy camaraderie, in which neither language nor culture is a barrier.

And of course, kudos to Netflix for programming yet another project that highlights people with different abilities, such as those seen in the dating series "Love on the Spectrum." While these young people with autism are learning skills to better navigate life, each new documentary is helping avearge viewers better appreciate people with atypical neurology, no matter how differently they're presented. More representation of people with autism adds to the spectrum of our knowledge. Already, Max's excellence has redefined what it means to be a champion and to have a disability. Upon meeting him, viewers around the world – because what bigger global platform is there than Netflix these days? – will be inspired to follow his progress.

Unlike the Olympics, the World Rubik Cube's Championship is held every other year, which means that after the 2019 competition in "The Speed Cubers," we're not due for another until 2021 – the same year the Olympics are also supposed to return. Let's hope that some advancement is made in coronavirus vaccines or safety precautions so that these competitors can once again take the world's stage. In the meantime, the speedcubers are hard at work during quarantine to break the next record once the world opens up.

"The Speed Cubers" is currently streaming on Netflix.