Trump's properties: A playground for white nationalists, Groypers and other far-right loons 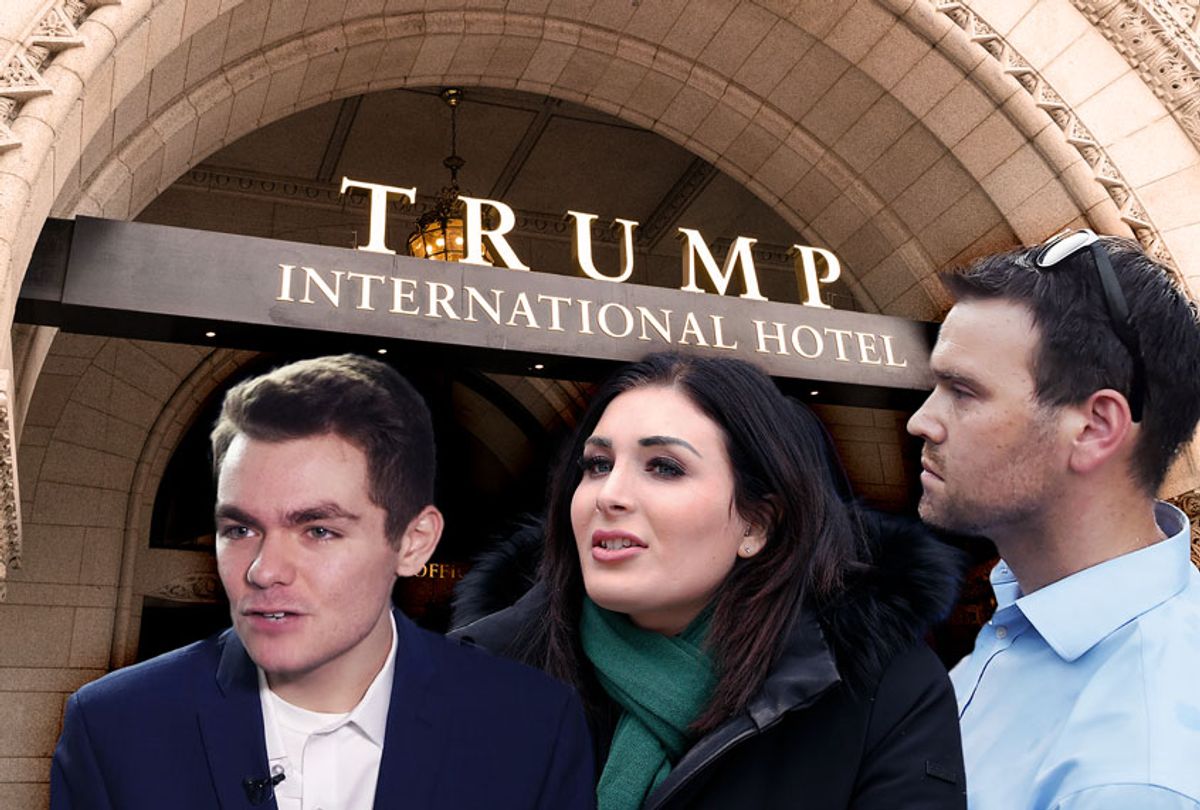 Conspiracy theorists, alt-right memers and prominent white nationalists have frequently appeared at properties owned by President Trump, where they've hosted gatherings, mingled with officials and spent money, according to research obtained by Salon.

Trump properties are well-documented hot spots for MAGA-world luminaries and hangers-on, particularly Trump International Hotel in Washington, where the lobby is frequently a blur of lobbyists, administration officials, lawmakers, corporate leaders and foreign dignitaries — the physical embodiment of the president's numerous conflicts of interest.

But in a sense those properties are also real-world iterations of the president's Twitter feed, a running scroll of the same groups. Both are also sprinkled to varying degrees with influential right-wing extremists and internet trolls (Diamond and Silk kicked off their 2019 "Chit Chat Live" tour at Trump Hotel D.C.), some of whom now are now moving into legitimate electoral politics under the auspices of the Republican Party in various states, including Oregon, Colorado, Georgia and Trump's new home state of Florida.

And though Trump fandom is little more than an ironic lark to young fringe-right adherents, who see themselves as more pure, edgy and extreme, those places draw an older generation that has influence, but might be looking for someone who knows better how to wield it today.

"Trump properties are the place to be if you're an elected Republican looking to dip your toe in alt-right waters. So no one should be surprised that once-mainstream Republicans and the NRCC are now backing the very QAnon supporters and fringe factions they've mingled with for years," said Kyle Morse, an American Bridge 21st Century spokesperson.

The more high-profile of these patron-extremists include:

Trump properties are a particularly popular draw for the Fuentes-led Groyper movement, a loose affiliation of far-right and alt-right nationalists who peddle racist and anti-Semitic tropes while mocking mainstream conservatives — including some less radical white nationalists — as phonies.

As with most things born in the nether regions of the internet, the origins of the Groyper movement are not easy to understand. Its name is drawn from a specific Pepe the Frog pose, in which the alt-right cartoon mascot rests his chin on his interlinked hands.

Marilyn Mayo, senior research fellow at the Anti-Defamation League's Center on Extremis, described the movement in a 2019 interview.

"What they're trying to do, there's this whole grouping who refer to themselves as the dissident right, they want to move the Overton window," said Mayo, referring to the shifting spectrum of acceptable ideological and political discourse. "They want to make racism and anti-Semitism mainstream."

Trump made waves this January when he retweeted a clip of Michelle Malkin, the self-described "mommy" of the Groyper movement, complaining about online censorship. Trump added his own caption, thanking her:

"The Radical Left is in total command & control of Facebook, Instagram, Twitter and Google. The Administration is working to remedy this illegal situation. Stay tuned, and send names & events. Thank you Michelle!"

Fuentes has attended events at Trump International in Washington, including with friend and fellow Groyper Megan Harris, and both appeared there during the conservative gathering CPAC this year, as documented in a since-deleted Instagram post. The two were joined at CPAC by musician and Groyper Ricky Rebel, who shared a number of pictures from Trump International on his Instagram story.

Fuentes, like several other fringe-right personalities, has also patronized Trump National Doral, the president's golf resort near Miami, where he appeared in an Instagram photo with alt-right internet personality Baked Alaska (Tim Gionet).

Gionet, a former BuzzFeed writer who later got Trump's face tattooed on his arm, has shared Instagram posts from Trump properties three times in the last year: at Doral National, and the Trump International hotels in Las Vegas and Washington. The last of those included a photograph of a burger and fries, captioned, "imagine eatin this good."

Three summers ago, Gionet joined Fuentes at the infamous Unite the Right rally in Charlottesville, where he was billed as a scheduled speaker alongside leading white supremacist Richard Spencer. He has tweeted the "14 Words" (a well-known neo-Nazi phrase) and, in since-deleted tweets, shared videos of friends saying that "Hitler did nothing wrong." He's also posted images of people in gas chambers.

In March 2019, Gionet attempted to distance himself from the alt-right, denouncing it as hateful and violent. Following the mosque attacks in Christchurch, New Zealand, he posted a video in which he apologized for his contributions to the culture, but a few months later was caught spewing Islamophobia at an ICE protest. He subsequently linked up with the Groyper movement and deleted his apologies.

Other fringe-right associates of Gionet have spent time and money at Trump properties.

One of the more well-known names is alt-right personality, Pizzagate truther and noted misogynist Mike Cernovich, whom Gionet engaged in multiple projects. Cernovich has spent considerable time at Trump properties.

Gionet once spent Christmas with blogger Chuck Johnson, the aforementioned "most hated man on the internet," who reportedly had a hand in vetting Trump Cabinet picks during the transition (working with Facebook's Peter Thiel) — and may have acted as an inadvertent conduit between WikiLeaks founder Julian Assange and Donald Trump Jr.

In January 2017, Johnson posted on Facebook that he was "building algorithms to ID all the illegal immigrants for the deportation squads." HuffPost quoted a source claiming to have seen Johnson discussing that same project with "a whole bunch of really important people" at the Trump hotel in D.C. Former Breitbart editor Katie McHugh has said that Johnson asked to be connected with senior Trump adviser Stephen Miller so he could pitch a "way to identify every illegal alien in the country."

In 2018, Johnson was also spotted at Trump International Hotel in Las Vegas.

Then there's the Posobiec, who while not exactly a Groyper is a fringe conspiracy theorist with anti-Semitic views whom Trump has retweeted a number of times. Posobiec and his wife met Brexit architect Nigel Farage at the Trump Hotel in Washington in February, 2017, and have spent both Christmas and New Year's holidays there.

Posobiec spread the debunked conspiracy theory that the Las Vegas mass shooter was affiliated with ISIS, but was challenged for credit by right-wing provocateur, Islamophobe and Trump patron Laura Loomer. The two seemed to smooth things over before AMPFest 2019, where Loomer appeared alongside Posobiec.

Just a few days after that, Trump tweeted his support for Loomer's candidacy. And since the 21st is officially his district of residence, he will have the chance to vote for her should she appear on the ballot in November. (Her chances of winning are not strong: Incumbent Rep. Lois Frankel, a Democrat, was re-elected without opposition in 2018.)

On March 3, Loomer was back at Trump International in D.C.