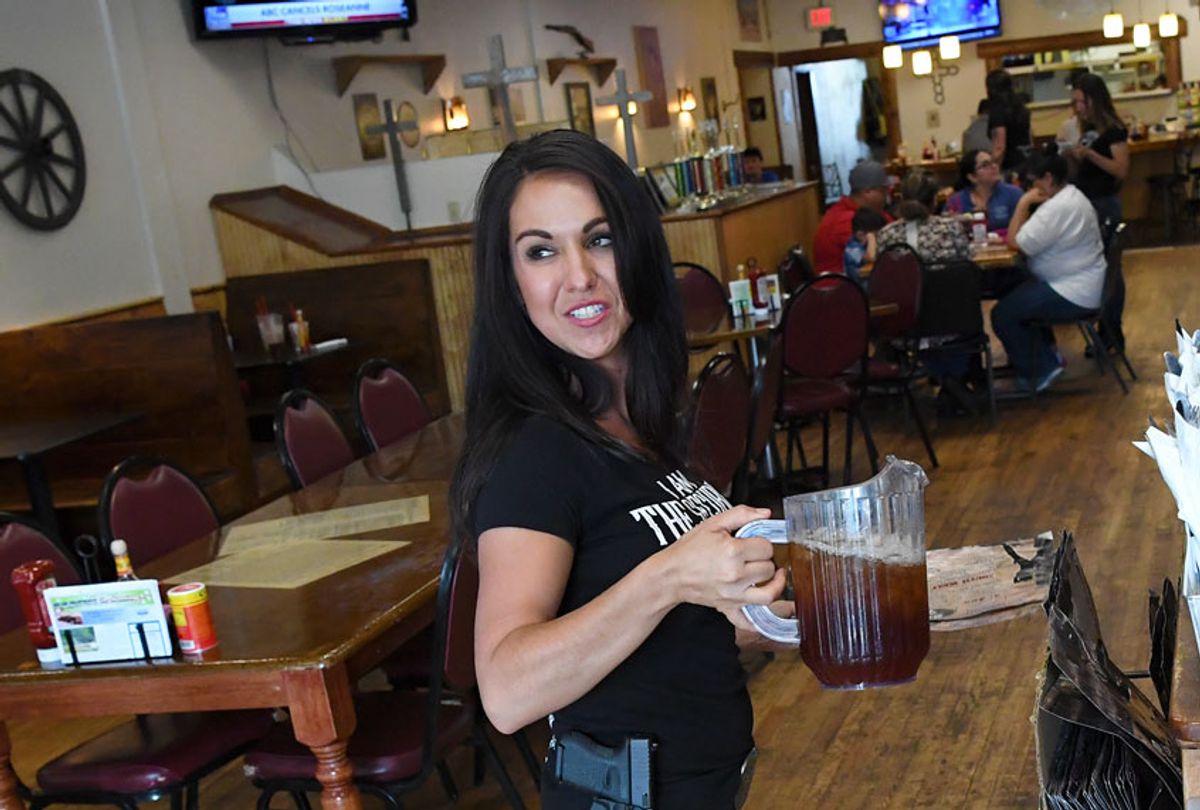 Lauren Boebert, owner of the Shooters Grill, has gained national attention for her decision to encourage her staff to carry a firearm during work on May 29, 2018 in Rifle, Colorado. (RJ Sangosti/The Denver Post via Getty Images))
--

Shooters Grill, which Boebert co-owns with her husband in Rifle, Colo., has a schtick. Wait staff are required to wear holstered and loaded guns as they serve customers. (For years, they were not required to take training courses.)

"It keeps that feeling of the old West alive," Boebert told local TV news station FOX31 in 2019. "The customers have their jokes with the waitresses: 'If I don't tip are you going to hurt me?'"

But three years ago, Boebert's food apparently posed a greater risk to customers than untrained staff after her pork sliders allegedly poisoned dozens of people at a local rodeo, making them nauseous and sending some home with bloody diarrhea, The Daily Beast first reported.

Boebert shot to national headlines in recent weeks when she beat Scott Tipton, a five-term, Trump-endorsed incumbent, in the Republican primary by nine full points. It was the first time a challenger has beaten a sitting congressional representative in Colorado in 48 years.

That was not her first time in the headlines this year. A few months earlier, Shooters Grill made the news when the state temporarily revoked its license for re-opening amid the coronavirus pandemic in defiance of the governor's orders. "This was always about making payroll," Boebert has claimed.

But local health officials were already familiar with Boebert's operations. In 2017, authorities cited "an unlicensed temporary retail food establishment associated with Shooters Grill" for a mass food poisoning incident during the Rifle Rodeo at the Garfield County fairgrounds, according to Garfield County records.

The morning after the rodeo, the country's public health office documented receiving calls from attendees who complained of food poisoning. Some reported severe symptoms.

An investigation traced back to the pork sliders served by Boebert at the event. The meat "was smoked at Smokehouse 1776, a retail food establishment located in downtown Rifle, Colo., across the street from Shooters Grill and owned by the same person," according to the records.

They also reported "bare hand contact with ready to eat foods, no handwashing station [and] no barrier protection from insects."

A Boebert spokesperson told The Beast that the restaurant "did not receive a fine or have any other type of disciplinary action."

"Staff was told of several individuals who claimed to experience similar symptoms but say they did not consume food at the rodeo," the spokesperson said.

The health department report said "100% of those interviewed with diarrhea ate pork sliders."

These days, Boebert is a conspiracy theorist who wants to abolish the Department of Education and does not believe that comprehensive sex education should be taught in schools.

She supports the bizarre but ascendant QAnon movement, the far-right fringe group which believes President Donald Trump is on a divine mission to arrest thousands of celebrities, Democrats and members of the "deep state" for allegedly running a global pedophilia ring and eating children.

In an interview with the pro-Q webcast "Steel Truth" this May, Boebert said she was "very familiar" with the conspiracy theory while appearing to maintain an acceptable distance from it.

"So, that's more my mom's thing. She's a little fringe. I try to uh — I just try to keep things on track and positive," she said. "I am very familiar with it, though."

"Everything I heard of Q, I hope that this is real, because it only means America is getting stronger and better," she continued. "And people are returning to conservative values, and that's what I am for."

Boebert added that QAnon followers were "only motivating and encouraging and bringing people together stronger, and if this is real, then it could be really great for our country."

She is not the first Republican candidate to flirt with QAnon, though she still has not gone as far as fellow candidates Marjorie Taylor Greene of Georgia and Oregon Senate nominee Jo Rae Perkins, both of whom profess outright support.

Boebert has since sought to distance herself from that story.

"No, I'm not a follower. This is just a fake attack from the Democratic Congressional Campaign Committee," she told local Denver news station KDVR.

"QAnon is a lot of things to different people. I was very vague in what I said before. I'm not into conspiracies," she said. "I'm into freedom and the Constitution of the United States of America. I'm not a follower."

An FBI memo warned last August that the peripheral right-wing movement posed a domestic terrorist threat. Despite the alarm from his own law enforcement, Trump himself has appeared to nod at QAnon supporters in campaign ads and dozens of tweets.

Trump himself also called Boebert to congratulate her after upsetting his candidate.

"It was amazing," she said of the experience. "President Trump got on the phone and said, 'Lauren, you are really great. I have professionals in my office saying, 'What happened?'"

That weekend, she met Trump at his Independence Day event at Mount Rushmore in South Dakota, where she says she thanked him for everything he has done for the country.

"I am the battle tested MAGA candidate," she said. "I knew from the beginning I was more MAGA than my opponent."