Which hot dog are you? The enduring appeal of regional food in the global digital age

Americans' obsession with regional food is built into our country's DNA, and now it's reached social media 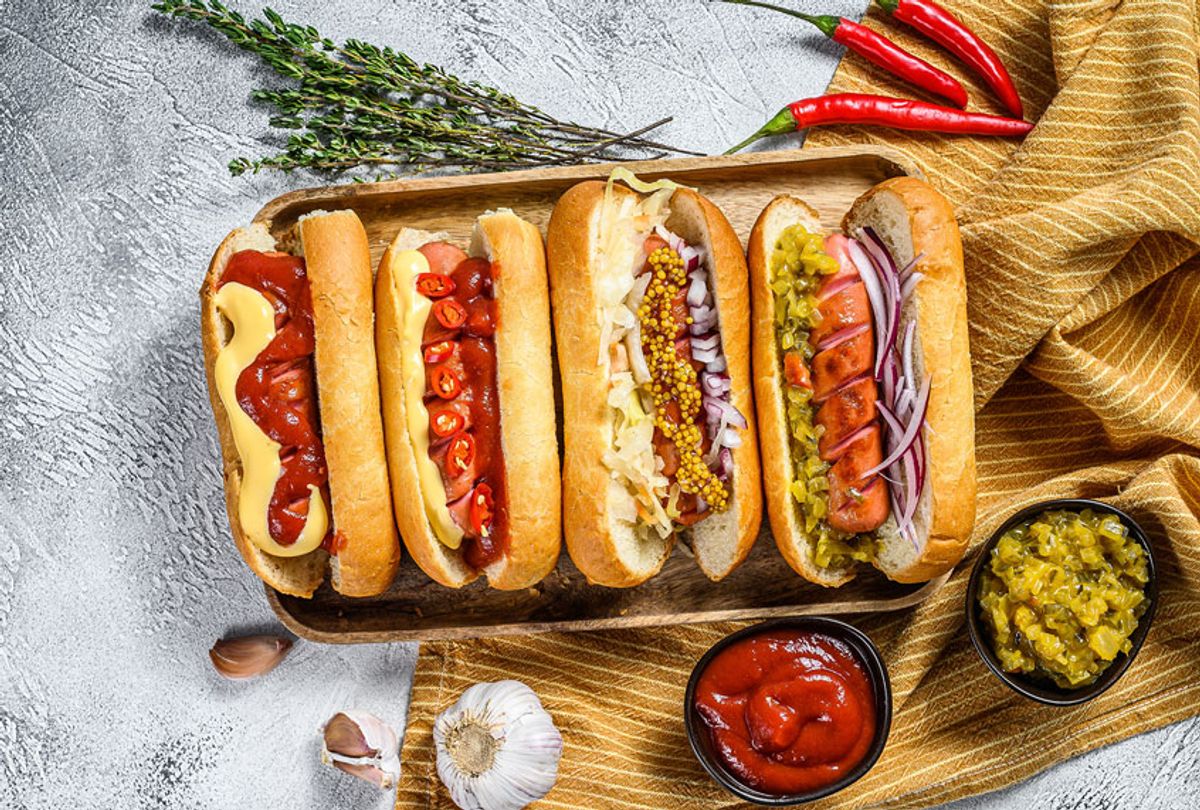 On July 4th — just a few hours after competitive eater Joey Chestnut downed 75 Nathan's hot dogs in ten minutes, four more than his record the year prior — a screenshot of a poster featuring different regional hot dogs started making the rounds on social media. "Tag yourself," the caption would read, "which hot dog are you?"

Some respondents leaned whimsical (who wouldn't want to be a hot dog cut to look like an octopus?), while others took a more philosophical bent in their selections. My college roommate chose the bagel dog because it kind of looks like it's wrapped in a comforter, which has been her default pandemic state. But the majority of respondents chose the hot dog that most aligned with where they grew up or were currently living.

From slaw and chili-smothered Carolina dogs, to the Chicago dog which nestled next to a pickle spear in a poppy seed bun, home state or country pride was strong in the comments section.

This hot dog chart isn't the only interactive food meme in recent memory. A few months ago, it was a screenshot of an "Encyclopedia of Sandwiches" graph. Each sandwich was numbered, so people simply responded with their number like it was some kind of bread-wrapped enneagram test. (For what it's worth, I'm a 36/37 hybrid). There have been charts of regional barbecue preferences, pizza chains, and soft drinks. Most start their lives as wall art or infographics, but once they hit Twitter, their future is clear: "Tag yourself. What are you?'

In a culinary landscape that feels increasingly globalized, it may seem odd that these memes — which are often built upon regional identity and foodways — pop up with such regularity, but according to food historian Sarah Wassberg Johnson, our collective fascination with state-specific dishes is almost as old as the country itself.

"We have a very individualistic culture," she said. "So, I've done some research on the history of cookbooks, and there's a period of time — really in like the 1820s to just before the Civil War — where there's this rash of American cookbooks, and they are all very distinct to the state or region the author was writing from."

One of her favorites is the 1842 cookbook "Everybody's Cook and Receipt Book," which is subtitled: "But more particularly designed for Buckeyes, Hoosiers, Wolverines, Corncrackers, Suckers and All Epicures who wish to live with the present times." The nicknames, of course, reference individuals living in Ohio, Indiana, Michigan, Kentucky and Illinois.

It features recipes like "Hoosier Pickles," which is a vinegar relish featuring cauliflower, white cabbage and root vegetables, and "Buckeye Pudding," made with milk, molasses, ginger and sifted cinnamon.

"I don't think staking claim to regional recipes is just an American thing," Johnson said. "But I do think that's part of how we kind of build our individualistic identities."

According Emily Contois, a food historian and author of "Diners, Dudes, and Diets: How Gender and Power Collide in Food Media and Culture," maintaining regional foodways in an increasingly industrialized — and thus, in some ways, homogenized — country, was one of the impetuses of the "America Eats" project, a Works Progress Administration effort undertaken by the Federal Writers' Project (FWP) from the mid-1930s until 1942.

"Writers were tasked with capturing what editors viewed as 'authentic' American regional food cultures, conjured in distinctly nostalgic terms," Contois said. "The editors viewed these regional foodways as increasingly at risk of disappearing due to the proliferation of industrialized food and of nutrition science food rules. Eaters today also express such concerns about 'processed foods,' for example, changing what and how we eat, although it's fascinating how many regional foods incorporate such ingredients, from Velveeta cheese to Cool Whip."

In the ensuing decades,  various regional dishes would get their respective moments in the spotlight — in magazine features, travel programs and Instagram posts. It was almost inevitable that they would join the meme age because, as digital rhetoric scholar Heather Woods points out, inherent to memes is an invitational quality. Anyone from anywhere can create one, and anyone can respond.

"They invite people to participate," Woods said. "That is one of the sort of basic characteristics of means, and one reason that they're a very powerful form of communication, because they invite individuals to engage with them. To recreate them, or to remix them, and that is the way that they move across digital cultures or across platforms or across communities."

It's also really common for things that weren't originally made in the digital space to become memes — Woods, for example is part of a Facebook group specifically centered around identifying objects that were offline and made into memes. That's why she's not particularly surprised that a poster of regional hot dog toppings would find new resonance and new audiences on the internet.

She's also not surprised that people are using memes as a means of describing and asserting their regional identities.

"Memes are powerful forms of communication, but they don't seem like it because they seem silly, You know, 'Tag yourself, are you a Kentucky hot brown or not.' That's not to trivialize anything. In fact, it's to make it very serious that people are doing identity-building in meme format that shows the importance, right?."

It's the Twitter analogue of the cookbook for Hoosiers, Buckeyes and Wolverines in a culinary and digital world that feels increasingly vast; not to mention a world that currently may leave individuals feeling particularly lonely and nostalgic.

"While that has brought for some eaters convenience and a sense of limitless freedom in food choices, it also dilutes a sense of time and place, of roots and connections, which people are likely seeking all the more now given how COVID-19 separates us," she said.

In light of the pandemic, it makes sense that these memes have cropped up again and again over the last several months. All across the country, people are isolated and perhaps wistful for better times and the dishes we ate during them. So, until you can go home again, tag yourself as the food that evokes those feelings the most.