Comfort me with food memoirs, the only books I want to read right now

Cooking is the only metaphor I have, so in the pandemic, feed me apples and "Midnight Chicken" 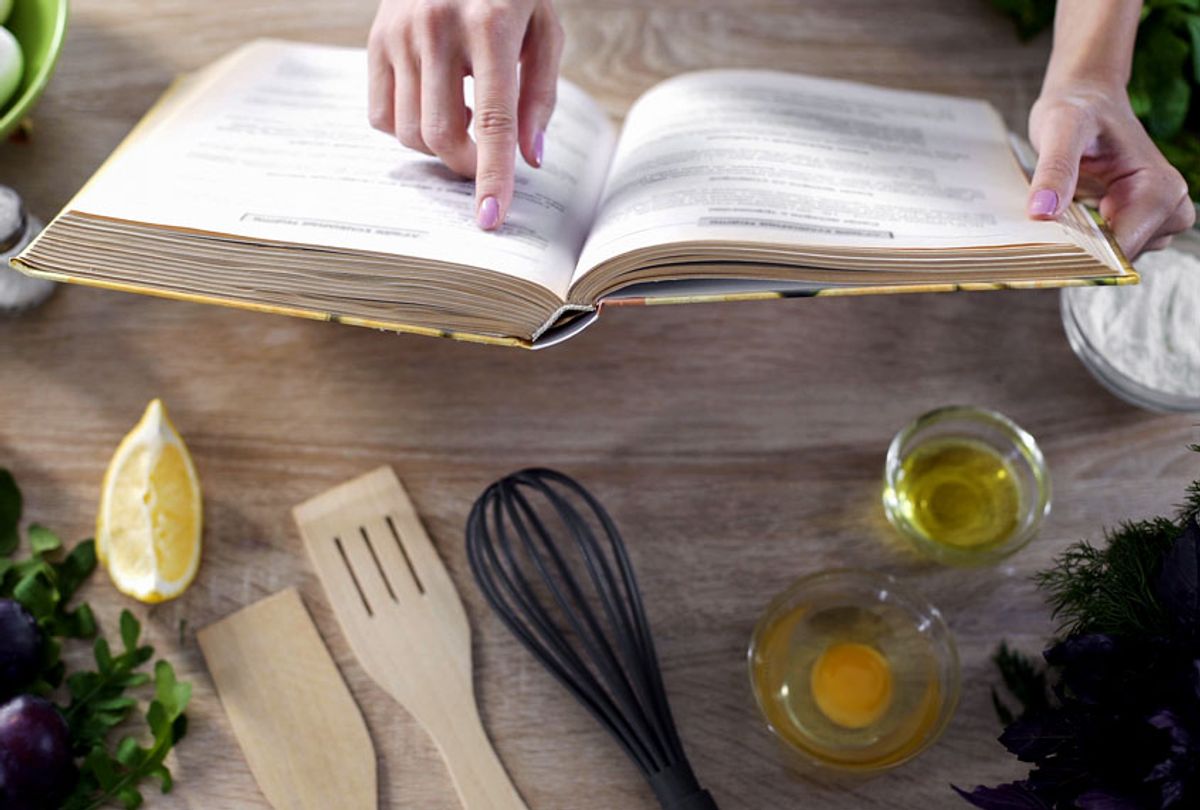 It was a question I not too long ago would have been able to answer confidently. In the midst of one of the many virtual space conversations I've been having with friends lately, Liz asked me for some book recommendations. Just a few months ago, back on Earth That Was, I'd been in her city and we'd spent a long lunch talking about novels. Now, I was drawing a blank. I am currently in my third consecutive month of bombing out on a virtual reading group. Last week, when a book editor friend shared the good news that her author's latest release had entered the New York Times bestseller list, I realized I knew not a single title on it. Nor did I care. These days, if it doesn't have at least one anecdote involving pie contained within, I don't want to read it. At least I don't lack for some intriguing recent options.

My love of the food memoir — or a cookbook with a strong narrative — predates even my love of cooking. When I was a college student in England, I discovered a copy of Elizabeth David's "An Omelette and a Glass of Wine" in a used bookstore. I was at the time living on Pot Noodles and cigarettes, but the title alone enthralled me. It seemed to promise a sophisticated approach to eating that was within my humble reach. I remember placing that very order at The Stockpot soon after. It's still one of my favorite meals.

Every winter, after the frenzy of the holidays has died down, I reread the late Laurie Colwin's "Home Cooking" and "More Home Cooking." They're two of the friendliest, chattiest, most approachable books I've ever read, and among the top tier of works that informed my own sensibility as a cook. I've always remained ambivalent about her fiction, but her self-deprecating accounts of meals cobbled together in a shoebox-sized Manhattan apartment and her full-throated approach to feeding her family never fail to inspire me when I'm all cooked out. This year, I felt like I'd just put down my well worn copies when I picked them right up again, craving nothing but the reassuring voice of an old friend — a cake baker, a bread maker, a fan of simple fare and the tried and true.

I am not alone of late in finding that food is both a source of tremendous anxiety and profound respite. I recently spent four weeks trying to get a grocery delivery, then found myself sobbing when almost nothing from the order actually arrived. I get up in the predawn light to venture over to the 24-hour supermarket at the far end of my neighborhood, because I know it will be empty. I make meticulous shopping lists, only to find the store erratically stocked — entirely out of butter on one visit, picked clean of white beans on another.

Yet I also have settled into a therapeutic rhythm in my kitchen. My daughters — one who should be away at college right now and another who would otherwise be coming home late and pizza-stuffed after high school band practice or a softball game, are home, and there is no more soothing time of the day for me than when I am puttering around making their dinner. I gladly devote weekend hours to watching challah rise from my dwindling supply of yeast. I fill our tiny apartment with the aroma of ribs cooking until they fall off the bone, or chocolate chip cookies baking until the edges are perfectly browned. And when I read for my own pleasure, I want to read of other people who've done the same.

I go back to Ruth Reichl, recounting her Berkeley years in "Tender at the Bone," her ascent as a food critic in "Comfort Me with Apples," her tenure at the New York Times in "Garlic and Sapphires." I nod as I revisit her skepticism around Chilean sea bass, just like everyone who's read Anthony Bourdain remains forever skittish about ordering fish on Mondays. I make a mental note to make her recipe for aushak, a dish I obsess over from one of my favorite restaurants. I've been meaning to get around to it for 15 years. I thumb through Susan Herrmann Loomis's "In a French Kitchen," fantasizing about a life where I'm an ex-pat living in Normandy, polishing my copper pots every single time I wash them, finding time in my busy, fulfilling life to make impeccable vinaigrettes. Or I follow Gabrielle Hamilton around a New York City that no longer exists, tracing the legendary owner of Prune on the adventurous path of "Blood, Bones & Butter." I want to dissolve with Emily Nunn into the "Comfort Food Diaries." I want to laugh at Tyler Cord's "A Super Upsetting Cookbook About Sandwiches," a book that is not a memoir, but does include the No. 7 chef-owner's random thoughts on colonialism, as well as occasional apologies for being drunk.

What I don't want, it turns out, is to spend my time in Lyon with Bill Buford and his new memoir, "Dirt: Adventures in Lyon as a Chef in Training, Father, and Sleuth Looking for the Secret of French Cooking." Fourteen years ago, in his addictive bestseller "Heat," Buford embedded himself inside Mario Batali's Babbo kitchen. I loved "Heat;" it was an enthusiastic amateur's front line report of the world of professional cooking. I still think about it nearly every time I find myself dicing carrots like the hopeless, bereft of knife technique slob I am. But post #MeToo, Batali's godlike reputation has evaporated. And while Buford's new culinary adventures in France follow much of the winning formula of "Heat" — history, reportage, animal guts — they seem exponentially less charming now, as a middle-aged guy whose accommodating wife and young twins provide him with witty domestic anecdotes while he pursues His Dream.

For a more satisfying view into the world of rock star chefs, I prefer Fanny Singer's tender, "Always Home: A Daughter's Recipes & Stories." As a child, Singer — the daughter of legendary Chez Panisse founder Alice Waters — was the heroine of one her mother's books and had a Berkeley cafe named after her. But though she acknowledges that Waters was the "dominating, oxygen consuming force of my childhood," and "is a truly bad baker," her one-of-a-kind upbringing as culinary royalty makes for a tranquil escape right now.

Singer isn't competing with her mom as a recipe writer here; instead, she punctuates gentle memories involving culinary heavy hitters like Claire Ptak and David Tanis with simple, homey instructions for comforting things like pizza dough, black beans, or a dish involving leftover turkey and cranberries. Of course, the notorious egg in a spoon makes an appearance, complete with Singer's observation that the complicated, time consuming, delicious-sounding dish one makes in it "sums up my relationship with my mother." "Always Home" is a book for our current state of always home-ness, a gastronomic  scrapbook of  memories and an indulgent escape for all of us who've ever wished Alice Waters could be in our kitchen, making dinner for us tonight.

But if I could hunker with only one of this year's culinary memoirists, it would, hands down, be "Midnight Chicken (& Other Recipes Worth Living For)" author Ella Risbrindger. Risbrindger is not a veteran chef with a string of restaurants dotting the globe. She's not a journalist engaging in a theatrical bit of stunt cooking. At 26, she's also not some big deal influencer with a burger recipe that went viral. She had a blog, Eating With My Fingers, and has a fairly small Instagram following.

What the English writer and poet is instead is a person who has known deep sorrow and has cooked her way into some semblance of light. And that makes her a kindred soul to so many of us. She begins her 2019 memoir not in the kitchen but on the floor of her hallway, where she is trying to summon the will to get up. She has recently, after "falling out of love with the world," stepped in front of a bus. And then the love of her life, known here only as the Tall Man, comes home and helps her up and they cook a chicken together.

Had they existed in the same timeline, Laurie Colwin would've adored Risbrindger. Colwin wrote often of her soft spot for English food, back when English food was not a cool thing to champion. And "Midnight Chicken" is very English. There are ruminations here on pocket potatoes and "nice little nibbly things;" there are enough parkins and possets to satisfy any Nigella-reading, "Great British Bake Off" binge-watching Anglophile. It's an extremely good-looking book, charmingly illustrated and solidly bound, the sort of thing you can carry around from room to room, depending on whether you want to cook with it or curl up with it.

Risbrindger will advise you on "How to Grieve with Challah Bread," providing a tutorial both on grief and dough braiding. She will tempt you with "It Gets Better Brown Butter Brownies," because we all need equal measures of tender reassurance and salty chocolate. And she will talk about sadness in a way that isn't sad, finding nourishment in the darkness. Writing of meals gone wrong, she offers a life lesson. "You are not alone, and this is not ruined."

I know why I keep going back to food as my chief metaphor. It's because I never cease to be amazed that some of the most profound, beautiful and deeply connected experiences in life often coincide with the most devastating ones. We name the feeling that it gives us after a flavor, and we call it bittersweet.