N.Y. attorney general is doing conservatives a favor by going after NRA: They're its victims 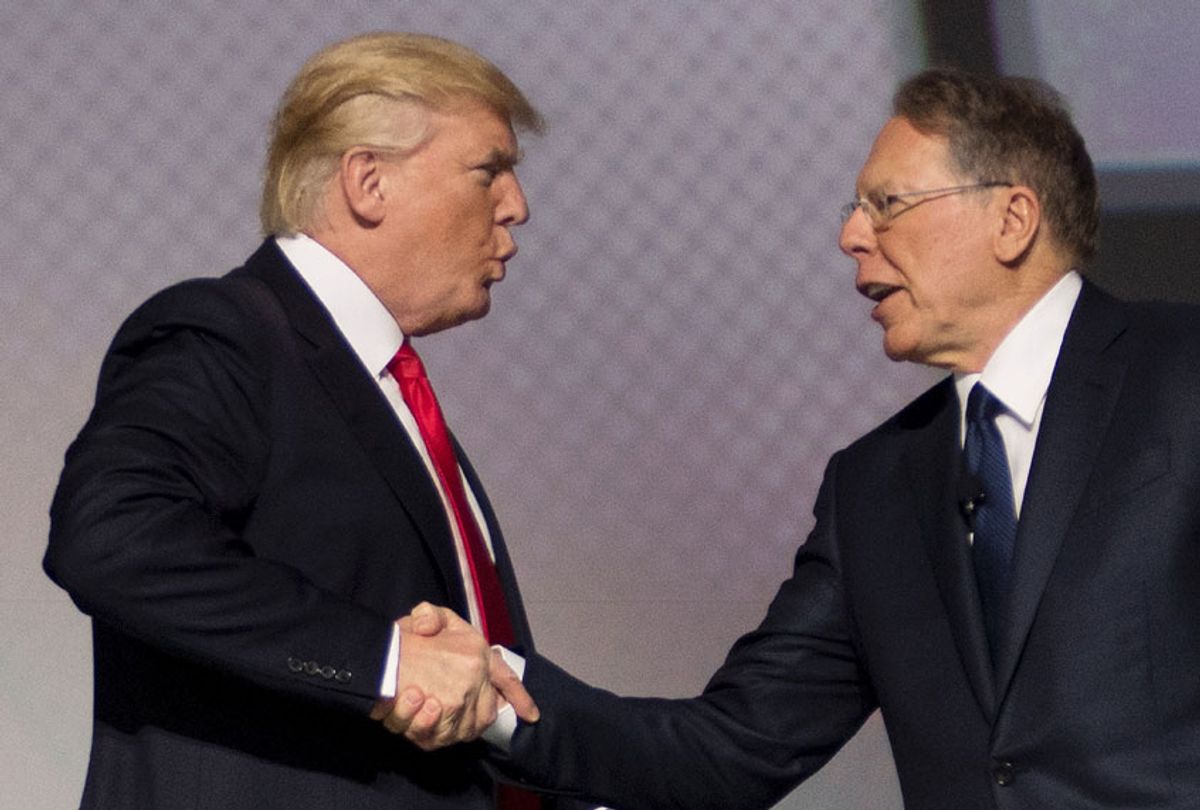 On Thursday, New York State Attorney General Letitia James filed a lawsuit seeking to dissolve the National Rifle Association, on the grounds that it's functioning as a massive grift and not, as it bills itself, a "civil rights" organization for gun owners. There's no way to know how this will play out — the NRA still wields political power, largely because it's been so useful to Republicans — but the evidence marshaled by James and independent journalists is overwhelming.

As James said in her statement, the NRA "went unchecked for decades while top executives funneled millions into their own pockets," and the degree of corruption was so broad and deep that the scheme has "basically destroyed all the assets of the NRA."

Many of the details of how NRA executives treated the tax-exempt nonprofit like a personal piggy bank have been widely reported in recent years, but the lawsuit generated even more astounding details, including allegations that NRA head Wayne LaPierre spent a million dollars of NRA funds on private chartered flights and vacations for his family. The result of this mismanagement and all the legal infighting as various NRA grifters sue each other has hobbled the organization financially, leading to massive layoffs and setting up this effort to disband the group entirely.

The answer to this "what about," of course, is simple: Planned Parenthood is not a fraudulent organization run by grifters who redirect millions in donor contributions into their own pockets. It's a legitimate medical organization and reproductive rights advocacy group. Comparing the two is a little like saying that if Jeffrey Dahmer had to go to prison as a serial killer,  George R.R. Martin should go to prison for being a serial storyteller. It's not the same thing!

More to the point, what this whining fails to understand is that, by seeking to shut down the NRA's fraudulent schemes, the main people James is protecting are the white conservatives who have supported the group for decades.

It wasn't liberals, after all, who were duped into writing checks to support what they believed was vigorous political advocacy, only to see their money go toward fancy hotel suites and designer clothes for the LaPierre family. No, it was conservative donors, many of them middle-class or working-class, who've eagerly poured money into the NRA, a great deal of which disappeared into what looks like a massive grift.

Of course liberals and progressives are celebrating the possible demise of the NRA, which has done immeasurable damage to political discourse and led to the preventable deaths of many thousands of people by making reasonable firearms regulation impossible. But in the most immediate sense, the NRA must be understood as a predatory organization whose principal target is conservatives.

The NRA's grift has been almost comical in its bluntness. The group traffics in over-the-top rhetoric designed to play on some of the darkest and most irrational emotions of American conservatives, including racist fears over the nation's changing demographics, overblown fears of crime and paranoid fantasies that liberals are trying to "take over" the country in illegitimate ways. So much of the hyperventilating conspiracy-theory discourse found on the right, especially the wild fever-dreams about progressive "violence," starts with the NRA, which sought to convince conservatives that they needed to spend ungodly amounts of money on buying guns and on supporting the NRA itself, in order to protect themselves from the imaginary threat of gun-grabbing libtards and antifa terrorists.

Far from thanking James for trying to shut down an organization that spreads shameless lies in order to separate conservatives from their money, Republican leaders and right-wing pundits are crying foul. Some of the defenses have been, uh, interesting.

"I prosecuted organizations or individuals who cheated their organizations, OK," said Jeanine Pirro, the former New York prosecutor turned histrionic Fox News commentator on Friday morning. "It happens all the time. It's no big deal, all right?"

The previous night, Fox News host Laura Ingraham warned that this was a sign of things to come and Democrats will soon "go after pro-life groups, conservative think tanks, conservative radio shows, cable networks, even churches."

And of course there was the concern trolling, with Ari Fleischer, the former press secretary for George W. Bush, claiming this lawsuit would backfire and was "one of the dumbest, biggest mistakes an attorney general or anyone can make in an election year," an argument that ignores that the gun control issue has become a massive rallying point that helped Democrats rack up major wins in the 2018 midterms.

But it's easy to see why conservative pundits are panicked. It's not just that the NRA has been a major player in helping Republican politicians over the years, both in terms of funding and in keeping the right-wing base riled up over imaginary threats. It's that grifting and con artistry are the backbone of the conservative movement.

If New York is actually successful in dissolving the NRA, it's quite true that, as Ingraham suggested, similar efforts could follow against right-wing activist groups. But that won't happen because of their ideology, but because so many of them rely on the same kinds of grifting and fraud the NRA has thrived on for years. The entire right-wing movement is awash in this kind of corruption.

Look at the ads in conservative publications or on right-wing sites: It's a chaotic dogpile of snake oil pitches, predatory gold-bug scams, and "survivalist" supplies that are drastically overpriced or worthless. Most of the familiar characters in the Fox News pundit universe — as well as Donald Trump's Cabinet — have their own email newsletters, and subscribing to one means a nonstop onslaught of email pitches for "miracle" cures and get-rich-quick scams. There are countless shady conservative political action committees that promise to help elect Republican candidates, but whose real purpose is to enrich the folks who run them. Onetime GOP vice-presidential nominee Sarah Palin ran one such PAC that drew lots of incoming donations and spent very little of it on real-world political campaigns. To a significant degree, the conservative movement exists as a way to compile lists of gullible marks used by scammers and con artists.

It's no coincidence that the president all these people love so much is also a lifelong con artist who entered office while settling a lawsuit with people he defrauded through his fake "Trump University." Swindling other conservatives is what conservatives do.

Indeed, it's an open question whether the conservative movement is a political movement with a grifting problem, or if it's primarily a money-making scam that sometimes does politics. This lawsuit against the NRA represents an existential threat to the way right-wing leaders have operated for decades, by separating fools from their money. Without these grifting operations, it's hard to imagine what the modern conservative apparatus would even look like. No wonder the people at the top of the right-wing pyramid are in such a panic, and "defending gun rights" has nothing to do with it.