The infamous study revealed how normal people can become obedient, power-hungry sadists under the right conditions 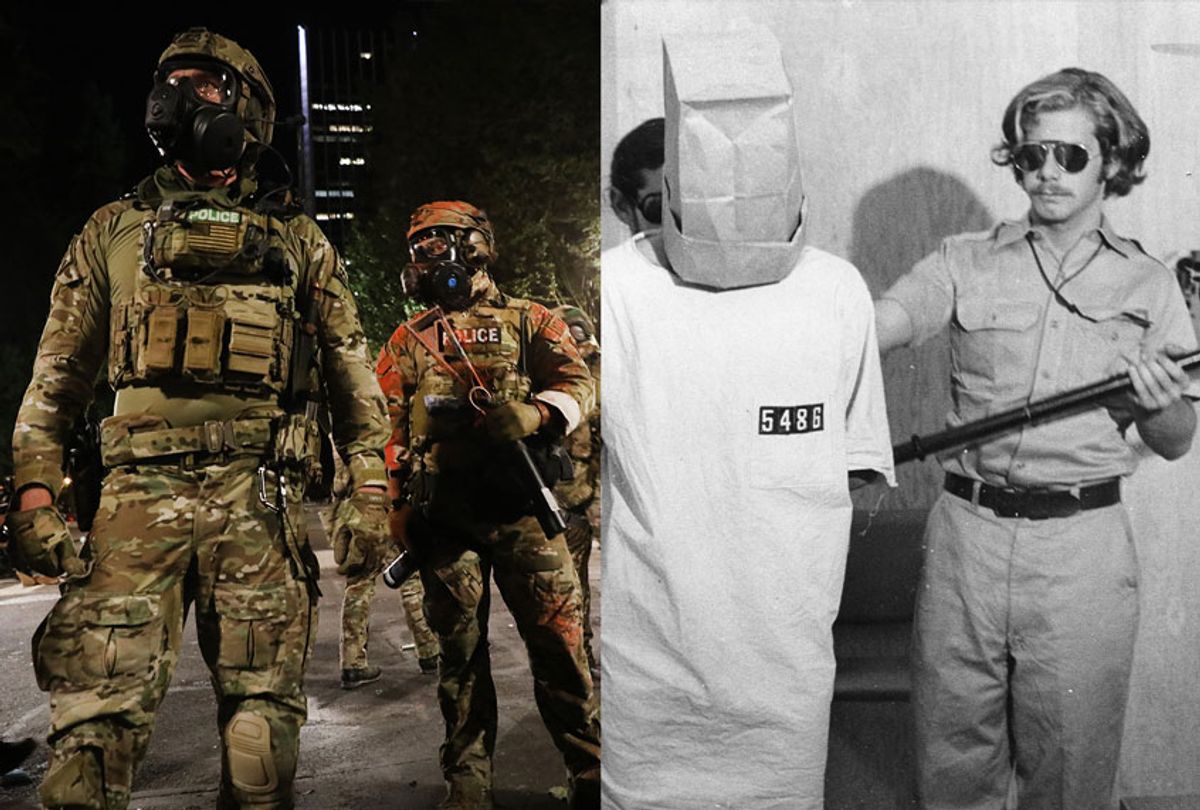 Federal Police clash with protesters in front of the Mark O. Hatfield federal courthouse in downtown Portland as the city experiences another night of unrest on July 25, 2020 in Portland, Oregon. | Prisoner with guard John Loftus, involved in the Stanford Prison Experiment. (Getty Images/Salon)
--

If your boss dressed you up in military gear and told you to spray tear gas on a group of nonviolent protesting mothers, would you obey their orders? Most of us humans like to believe that we are moral creatures, driven by empathy, and that we wouldn't do something cruel even if ordered to. Yet psychological studies have shown that the opposite is true, and that humans often obey unquestionably. Perhaps the most infamous study of this was the Stanford prison experiment, conducted nearly fifty years ago by Stanford University psychology professor Dr. Philip Zimbardo, which revealed how many human beings will be corrupted by power and bow to authoritarian leaders if socially permitted to do so.

One can see how this experiment has lingering relevance — for instance, in the ordeals of the Portland protesters, who have been tear-gassed amid peaceful protests and kidnapped in unmarked vehicles. What makes a law enforcement officer willing and ready to behave in these ways, to become foot-soldiers of a nascent police state, is a question that was already answered by the Stanford prison experiment.

First, though, a few words about the experiment itself. Conducted at Stanford University between August 14 and August 19, 1971, 24 students were divided into groups of "guards" (with nine students) and "prisoners" (consisting of 15 students) at a simulated prison in the basement of the college's psychology building. Once there, Zimbardo reports, the "guards" fell into sadistic and authoritarian roles, while the "prisoners" became submissive and despondent. A number of "guards" appeared to show genuine pleasure in tormenting the "prisoners," while the "prisoners" showed signs of extreme stress and learned helplessness.

Although intended to last for two weeks, the plug was pulled after less than one week. Still, the experiment became a go-to reference point for scholars and pundits attempting to explain how ordinary people can become tyrants when given power. Though ethical concerns and controversy still swirl around the Stanford prison experiment, its relevance today is undeniable. And as many Americans perceive the nation lurching towards authoritarianism, its conclusions are more vital to understand than ever. Indeed, only in understanding authoritarianism can one stop it.

As Zimbardo explained in his response to criticisms of the experiment:

My interest in exploring the psychology of time perspective, or the temporal zones in which we all live, emerged in part from the sense of distorted time we all experienced during the [Stanford prison experiment]. Without clocks or windows, that basement prison's time revolved around each guard shift coming and going. We often felt trapped in an expanded present time zone when the guards were endlessly harassing the prisoners, or in a present fatalistic time zone that most prisoners experienced when nothing they did made a difference in how they were treated. I subsequently developed a scale to measure individual differences in time perspective, the Zimbardo Time Perspective Inventory...

Salon reached out to Zimbardo for this thoughts on how his experiment pertains to America's political situation today.

"We have never seen anything like this before in America. And hopefully, when we get rid of [Trump] in November, we won't see anything like this again," Zimbardo — now a professor emeritus at Stanford — told Salon. After discussing how he and other psychologists, psychiatrists and mental health experts wrote a book in 2016 warning that Trump was mentally unfit to serve, he explained that Trump "is the most extreme case of a Present-oriented hedonist. And he attracts similar kinds of people."

The phrase "Present-oriented hedonist" refers to the Zimbardo Time Perspective Inventory, which refers to the different ways in which people experience the past, present and future. As Zimbardo explained, "about 20% of almost any population are Present-oriented Hedonists." Present-oriented hedonists are defined by how "they live in the moment. They never think about future consequences of their current actions. They always seek novelty and excitement. They're easily bored with the familiar. They always challenge rules that limit their freedom."

He added, "These are the people earlier who were against wearing seatbelts. These are the people earlier who against wearing head gear for riding bicycles or motorcycles. In general, they're anti-conformist. They want to have freedom from any rules. They don't follow rules. And so this is the most terrible positive for somebody who has the power of the President of the United States." Not only has it caused Trump to bungle America's response to the coronavirus, Zimbardo argued, but it has inspired the worst behaviors in his followers.

"What he exudes is power without limits. He can say whatever he wants, he makes up reality. He lives in his own world," Zimbardo explained. "He makes it up. He makes it up. He doesn't care. So that's a real sense of power. I say whatever I want, because I like it. And his followers get power through him. They admire his ability to do whatever you want to say, whatever you want. He doesn't have to follow any rules. He doesn't have to follow any decor. And that's what makes him and them dangerous, because it is all about power. It's unconstrained power and it's power without reason, which is deadly."

Salon reached out to Dr. Bandy X. Lee, a forensic psychiatrist at Yale School of Medicine for 17 years who taught at Yale Law School for 15 of those years — as well as the editor of "The Dangerous Case of Donald Trump" (to which Zimbardo also contributed) — for further elaboration on the applicability of Zimbardo's theories.

"The main point of the Stanford prison experiment is about the influence of institutional structure," Lee told Salon by email. "When abuse and violence occur, we are inclined to attribute it to 'a few bad apples,' and the enormous influence of structures, mostly unseen but well-documented, is easily overlooked. In my own area of study, I emphasize how 'structural violence' is not only the most lethal form of violence — causing more than ten times the deaths from all the suicides, homicides, and collective violence in the world combined — but is also the most potent stimulant of behavioral violence." After explaining that structural violence can entail political, economic and cultural layers of oppression — as well as the institutionalization of classism, racism and sexism — Lee identified how Trump's presidency has exacerbated these unjust structures in the United States.

"Having a perpetrator of structural violence in the office of presidency means that not only will he kill through his policies that vastly increase the advantage of certain groups over others, but he will also cause deaths through incitement of violence," Lee explained. "This, of course, is what is happening in Portland and in other cities: his structures and policies are stimulating violence. For what is happening now and other reasons — such as my work in prison reform and in global violence prevention — I have long considered the Stanford prison experiment to be one of the most important contributions to our understanding and never fail to assign it in my courses."

Lee said she invited Zimbardo to speak at a conference last year about the dangerous state of the world because "he gave critical psychological insight into how Mr. Trump resembled the worst prison guards in his experiment. . . . We can extrapolate from this how he, as commander-in-chief, would create systems that produce maximal suffering and death, as well as generate more violent personalities in the society of which he is in charge."

Dr. David Reiss, another contributor to the book and a fellow professor at Yale, echoed Zimbardo's and Lee's observations.

"Even though the experiment itself had its problems in terms of methodology and what it proved or did not prove, it still brought out the ideas that under certain circumstances, people can act in ways that are very sadistic, that are very authoritarian, that are not part of what they consider their usual personality," Reiss explained. "And in that situation, it may not have been a perfect experiment, but on the other hand, it brought out that those capabilities are there. And we get to see in politics right now is that basically the cover has been taken off the wrappings of the worst part of people's personalities in a lot of different ways."

Reiss drew attention to how some of these aspects of the American character existed long before Trump rose to power.

"There are unique aspects to America because of where we came from in terms of slavery, in terms of civil rights, in terms of other issues," Reiss told Salon. "But you can look at most cultures and see the same basic dynamics played out in different ways, that human beings have a capability of cruelty and sadism. And if it's not kept in check one way or another, it can be extremely dangerous. And of course, the more that technology and the media can come into play now more than it did 20 years ago or 50 years ago, or a thousand years ago, the more dangerous it is in certain ways."

"We see people following Trump now, and supporting him and doing his bidding quite enthusiastically in fact, and that itself I think — if you're looking at this huge experiment playing out in front of our eyes, so we don't even have to artificially create these conditions — we have it laid out for us," Mika told Salon. "You see the Republicans in Congress supporting Trump in his decisions and defending his bizarre statements as if they completely lost conscience. And so the question is, do they have a conscience in the first place?"

She added, "What Trump has done, I think he, he has given permission for people with with deficiencies in conscience to show their true colors."

Reiss was pessimistic about whether America can become a fully functional democratic welfare state again.

"We can't close Pandora's box," Reiss explained ruefully. "We could acknowledge what's emerged and find better ways to deal with it. But just like really any time in history when something like this has come out, it's a process of first having to get past the denial and acknowledge that there is a problem. And then within the context of the culture we're in now, what better ways are there to deal with it?"

He added, "What might have been better after the Civil War or the Revolutionary War or World War I or World War II may not work now. What would have worked in Ancient Greece would not work now. So it's not really a matter of going back as a matter of acknowledging that this is human nature, that the changes in human nature are going to be evolutionary over not even generations but over hundreds of years or millennia. But there are things we can do better to keep it in check in the current environment."