The rise and fall of the subversive '90s cartoon, including its disgraced creator John Kricfalusi 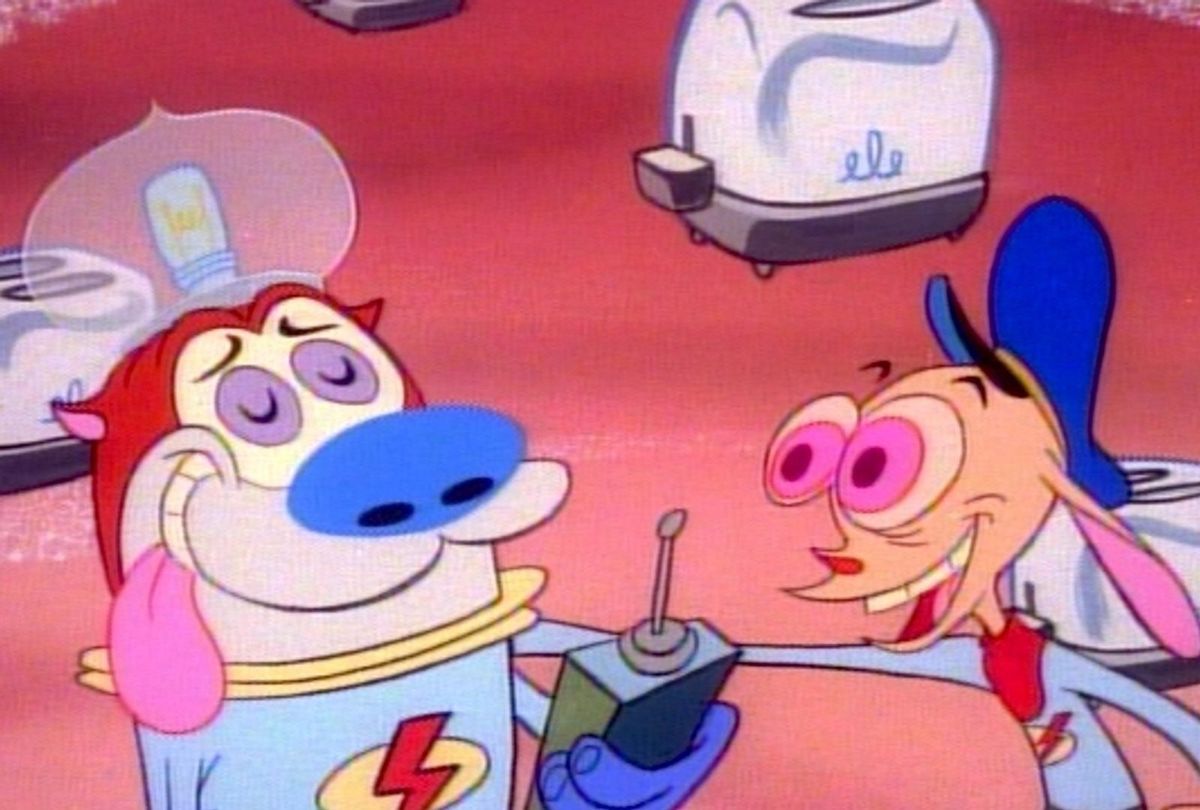 The pre-title sequence of the spunky documentary, "Happy Happy Joy Joy: The Ren & Stimpy Story," heaps praise on the controversial John Kricfalusi, the innovative creator of Nickelodeon's cult favorite animated series from the '90s. "He has a rock star status," says one interviewee. His show is complimented for being "unapologetic and disgusting," and, according to a news report, it was the most popular made-for-cable series in television history.

But behind the scenes was a different story. There are reports that John K. (as he was called) was abusive. "There was an ugly undercurrent," confesses one observer. Another woman says, referring to her experiences with Kricfalusi, "I still have nightmares about it."

Directors Ron Cicero and Kimo Easterwood plumb the depths of Kricfalusi's genius and address his extremely bad behavior to chronicle both the trailblazing path he initiated in the field as well as his spectacular downfall. "Happy Happy Joy Joy" also probes, perhaps too gently, the conundrum — Can you separate the art from the artist?

If the film asks viewers to draw their own conclusions to that question, it does present Kricfalusi as initially endearing as he recounts falling in love with animation. He describes discovering flip-book animation, and how drawing funny, exaggerated illustrations made people laugh, a route to popularity.

While he pitched network Saturday morning cartoon TV executives, acting out the entire storyboard, it wasn't until he answered a call from Nickelodeon that anyone responded to his edgy style of humor. That producer was Vanessa Coffey, who claims she did not want his "Your Gang" series pitch, but instead was interested in the two supporting characters, Ren and Stimpy. She begged Nickelodeon's head, Geraldine Laybourne, to greenlight the project, and six episodes were ordered.

This history is recounted in a zippy fashion that also reveals how John K. imagined the characters that would make him famous. Ren, he says, is basically an a**hole, and Stimpy his loyal, simpleminded friend. (John K. uses a less politically correct term). That Ren is voiced by Kricfalusi — and modeled after Peter Lorre — while his then girlfriend, Lynne Naylor, is the basis for Stimpy, is telling, and not just because of what it says about Kricfalusi's megalomania and thoughts about women. Stimpy seems to love Ren no matter how much he is slapped around and abused. Their codependent relationship is obviously steeped in painful truth. "Happy Happy Joy Joy" also shows how John K. created other characters, such as George Liquor, after his demanding father. (His and other characters' expressions are modeled after Kirk Douglas, a fun fact).

There is considerable enjoyment in going behind the scenes with various animators at Spumco, the show's animation studio. A brief tribute to the work of background Illustrator Bill Wray is terrific, as is a montage of clips that showed how "Ren & Stimpy" emphasized close-ups of outrageous and/or disgusting things and held those shocking images for laughs. (The "Ren's Toothache" episode being a prime example). The documentary also illustrates how the studio sidestepped censorship issues in a creative fashion, getting approval from network executives on misleading storyboards. A lively discussion of "Son of Stimpy" shows how that episode — about Stimpy losing his fart — was both simultaneously offensive and touching. (Coffey emphasized creating emotion).

But the Spumco team is also said to have had a cult mentality in following its leader. Kricfalusi is described as being eccentric and volatile, yelling at employees, and creating a pressure cooker environment. This segues into the negative, and feeds into his controlling tendencies. He would hold up approvals on layouts, creating a production bottleneck, which would cause delays in delivering episodes. And, after the show was an instant hit, Kricfalusi let his ego run rampant, declaring that he would refuse to conform to budgets and deadlines. John K., who appears to be his own worst enemy, was soon fired.

And if that blow wasn't enough, "Happy Happy Joy Joy" chronicles Kricfalusi's vain effort to revive the show as "Ren & Stimpy 'Adult Party Cartoon'" in 2003 — only to be canceled after eight episodes. (Comedy Central recently announced a reboot of the original series sans Kricfalusi is in the works.)

Eventually, the filmmakers get to the disturbing fact that Kricfalusi had an inappropriate relationship with Robyn Byrd, a teenage fan interviewed in the film. Byrd recounts exchanging letters with Kricfalusi when she was 14, and moving in with him at age 16, while she interned for him. What occurred between Kricfalusi and Byrd is not discussed in detail — a respectful move on the filmmaker's part, perhaps — but it doesn't have to be. It's creepy, even more so when there is evidence of another teenager, Katie Rice, experiencing similar abuse.

Cicero and Easterwood prompt Kricfalusi to publicly apologize to Byrd. (Cynics might suspect he agreed to be interviewed if he would be humanized as well as demonized). This episode in the film is easily the most provocative, but it somehow feels unsatisfying because Kricfalusi's contrition seems hollow.

"Happy Happy Joy Joy" could not have avoided this controversial moment. But the takeaways here are that the success of "Ren & Stimpy" encouraged its creator's bad behavior. He was proving himself to his tough-love father who never thought he'd succeed. He was abusive to his staff to achieve his singular vision. He was despicable in his preying on teenage girls. (He even admits that he crossed the border from Canada illegally — but did become a U.S. citizen). The clues, tidily packaged, explain away Kricfalusi's pathology. "Happy Happy Joy Joy" is a cautionary tale not a hagiography. Nevertheless, it ultimately leaves a bad taste in one's mouth.

"Happy Happy Joy Joy: The Ren & Stimpy Story" releases on VOD on Friday, Aug. 14 or is available for pre-order on iTunes.