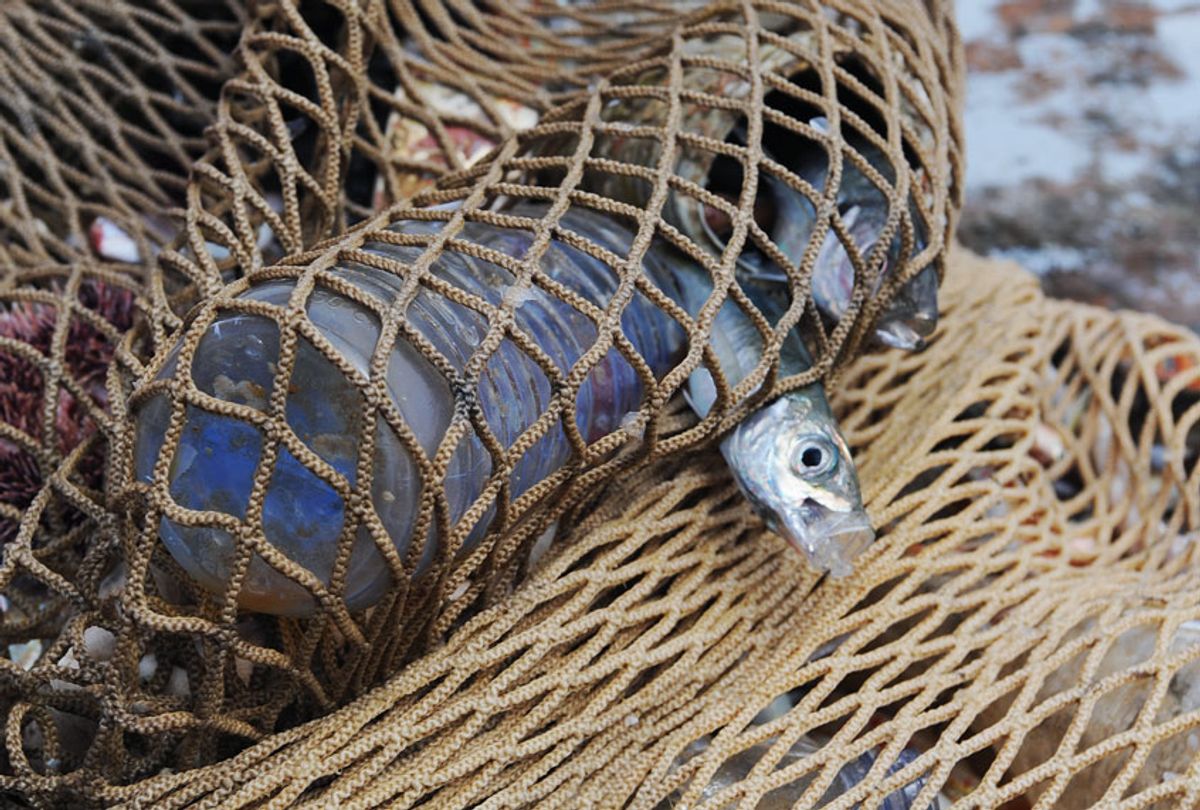 A new study that examined five different types of seafood found that traces of plastic contaminants were present in every single sample — suggesting that humans ingest a large amount of plastic pollution from eating seafood both wild and farmed.

The study, which was conducted by a group of scientists led by doctoral candidate Francisca Ribeiro from the University of Queensland's Queensland Alliance for Environmental Health Sciences, investigated 10 raw samples of wild sardines, 10 raw samples of farmed tiger prawns, 10 wild squid, 10 oysters and five wild blue crab. The authors' goal was to develop a simple quantitative means to improve plastic contamination detection methods.

The study also went into the different kinds of plastic found in different seafood. Sardines, for instance, were largely contaminated with polyethylene, which is used in packaging and bottles; whereas oysters' contamination was largely comprised of polyvinyl chloride, or PVC. PVC is the kind of plastic used in pipes, phonograph records and credit cards.

The authors said they could not be certain of the exact origin of the plastics in the different types of seafood. They speculated that the sardines may have been contaminated during food processing and handling, although not enough research has been done on plastic contamination during those processes to be able to say for sure. Other possible sources of contamination include the immediate environment where the seafood was caught, "airborne particles, machinery, equipment, and textiles, handling, and/or from fish transport."

Salon reached out to Ribeiro about the larger implications of the study, and its limitations.

"The purpose of our research was to simply develop a method to quantify plastics in seafood and understand the extent of microplastic contamination in seafood," Ribeiro told Salon by email when asked about whether the results for Australian seafood carry over to American seafood. "This method has been applied to Australian seafood, and although it can be applied to any kind of seafood, I really can't answer if there are implications for seafood consumed by Americans."

She also said that scientists are unsure about the health risks associated with the widespread consumption of microplastics.

"At this point we are not sure about the potential risk of ingesting seafood to human health because we didn't test it ourselves and, as far as I'm aware, there are no studies on the topic yet," Ribeiro explained.

Ribeiro also cautioned against assuming that the plastic comes from the ocean, telling Salon that "we do not know the source of the plastic (i.e. it may not come from the ocean) but our guess is that the values found in sardines can be from other sources, such as packaging and processing. Further research will focus on tracing the sources of plastic."

In terms of what steps should be taken going forward to address the problem of seafood plastic, Ribeiro said that "we should take a precautionary approach and make sure we stop the use of single use plastic, reduce the use of plastic in our everyday life and manage our plastic waste in a correct way."

While the origin of plastic in the wild samples of studied seafood is unclear, it is indisputable that there is too much plastic in our ocean, and plastic contamination in ocean fish and mammals is well-documented. The Pacific Ocean contains a vast morass of plastic and other trash waste known as the Great Pacific Garbage Patch, which has an area of 618,000 square miles. A February 2019 report found that over 690 marine species had been observed having ingested various kinds of microplastics.

John Hocevar, Oceans Campaign Director of Greenpeace, told Salon last year that plastic has become ubiquitous in human life, to an extent that most people do not even realize.

"We have put so much plastic into the environment at this point that it has gotten into everything around us," Hocevar said in an email. "Plastic is in the food we eat, the water we drink, and the air we breathe. Everywhere scientists have looked, they have found plastic, from the Arctic to the Antarctic, and from the tops of remote mountains to the bottom of the deepest trench in the Pacific."

He added, "It is difficult to say for sure how many people's reproductive health problems or cancer diagnoses stem from our widespread use of plastic. We know that these chemicals are dangerous, and we know they are entering our bodies through plastic packaging."