“Joe Biden’s got a plan," Sandra Smith tells Conway. "It's on his campaign website . . . You can read through it" 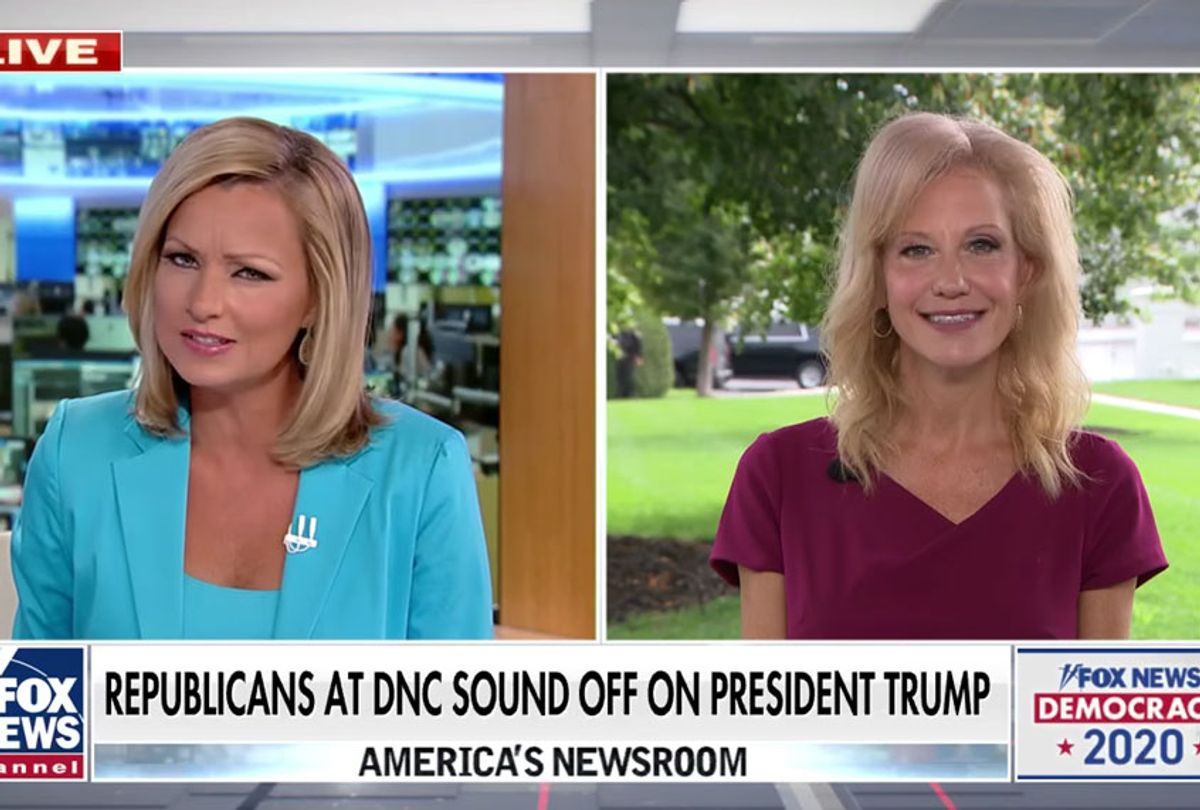 Conway praised President Donald Trump's widely-criticized coronavirus response during the interview — and urged the public to follow his guidelines for school reopenings.

"I think it is so important that the president is providing information to the public — not confrontation with the press — in these brief briefings so he can also take the tough questions from the press," she added. "One last thing: I didn't hear Joe Biden, Kamala Harris, John Kerry — anybody — talk about this virus in a meaningful solutions-based way for months while we were here around the clock. If they've got a good idea, Sandra, they shouldn't be sitting on it until Nov. 4"

"It's on his campaign website," Smith confirmed. "It's there. You can read through it. They ask for a lot more funding, a lot more testing."

"I thought the most remarkable part of the evening was AOC making her one-minute count by endorsing . . . actually nominating Bernie Sanders for president," Conway said, adding that: "AOC, Bernie, Elizabeth Warren — they've got a lot of power over the platform, and they will have a ton of power over a Biden presidency."

"To be clear, that's been reported as a lack of endorsement on her part for Joe Biden. She has asked for clarification from other news outlets this morning — not us — saying that that wasn't the case," Smith pushed back. "She didn't mention Joe Biden's name last night, but she does support Joe Biden. She put that out there this morning."

Ocasio-Cortez pushed back on claims that she "endorsed" Sanders at the convention after an erroneous tweet from NBC News.

"Convention rules require roll call & nominations for every candidate that passes the delegate threshold. I was asked to 2nd the nom for Sen. Sanders for roll call," she tweeted "I extend my deepest congratulations to @JoeBiden – let's go win in November."

NBC News later deleted its tweet about her speech.

"This tweet should have included more detail on the nominating process. We have deleted the tweet to prevent its further spread, but it can be seen here for the record," the network wrote. "Ocasio-Cortez was asked by the DNC to second Sanders' nomination. The nomination is a procedural requirement of the convention. Ocasio-Cortez has previously endorsed Biden, & her speech was similar in length to other nominating speeches."

But Ocasio-Cortez slammed the network for letting the tweet go viral for hours before removing it.

"You waited several hours to correct your obvious and blatantly misleading tweet," she wrote. "It sparked an enormous amount of hatred and vitriol, & now the misinfo you created is circulating on other networks. All to generate hate-clicks from a pre-recorded, routine procedural motion."