Night two of the virtual DNC held aloft the party's true stars: America and her people

AOC, Bill Clinton, John Kerry and Jill Biden had moments, but the state-to-state roll call gave the night its heart 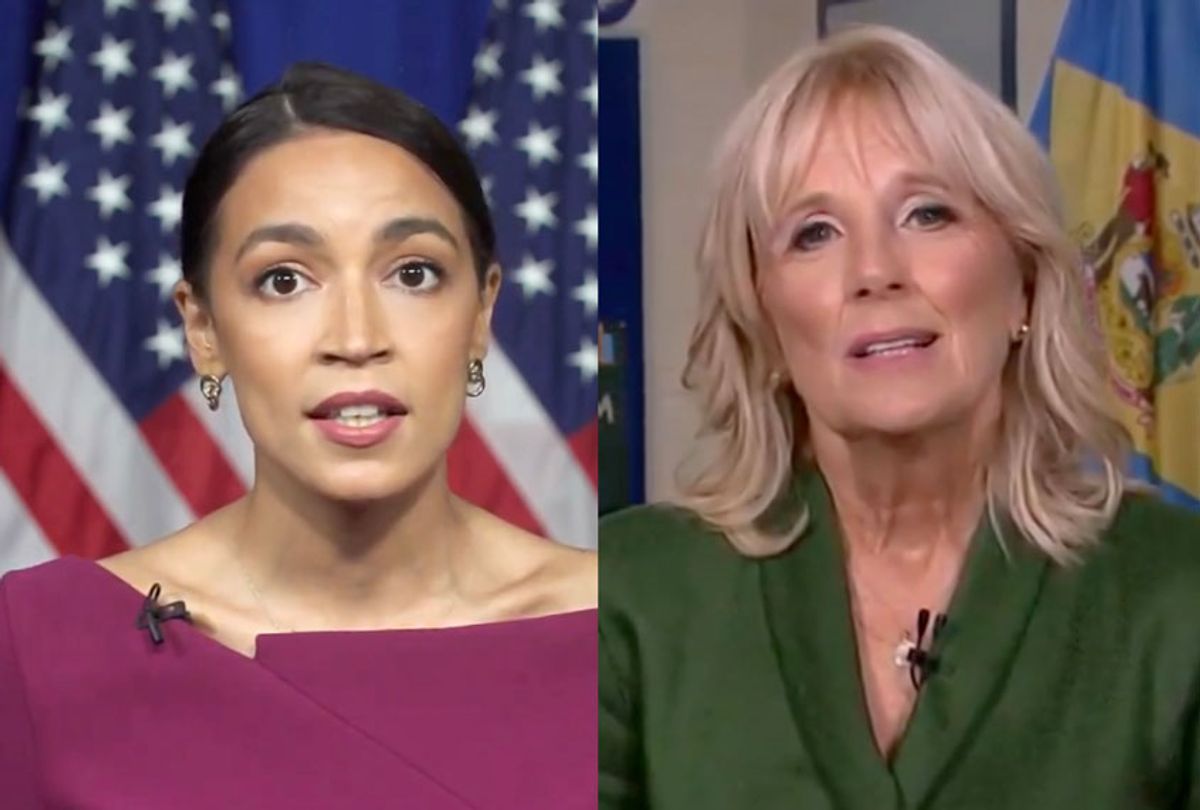 Night two of the United States' first virtual Democratic National Convention initially made me wonder how we were going to make it through this upright and awake.

I'm referring to the convention itself, not 2020.

The festivities began with 17 of the party's rising stars, all under 50, delivering the keynote address. Each offered their perspective on the world from various cities, states and cultural constituencies. Together they followed the party's prescribed script to a point, only diverging to personalize their contributions with their own stories before coming together on message in a chorus.

This friendly show of unity was nice and positive and astronomically boring, through no fault of any individual or their collective effort. Honestly, what could possibly top that opening-night knockout from Michelle Obama?

America showed up in the form of Jacquelyn Brittany, the New York Times security officer who met Democratic nominee Joe Biden in an elevator and became the person to nominate him for president. It showed up in its fullness by way of the DNC's first-ever virtual roll call, which included Khizr Khan, the Gold Star father of an army captain killed in action in Iraq in 2004, who joined from his hometown of Charlottesville, Virginia, to cast that's state's votes.

In 2016, Khan's appearance at the Democratic convention was a forceful rebuke to the then-GOP candidate Donald Trump's hateful anti-immigrant rhetoric. His Tuesday night appearance took on a different meaning in a presidential election that in many ways is haunted by the 2017 Unite the Right rally … in his own community.

America showed up in the unexpected appearance of Matthew Shepard's parents Judy and Dennis, who cast Wyoming's votes and reminded us of the ever-present need to protect LGTBQIA+ rights and safety. The Shepards are keeping their son's legacy alive through passionate activism, and simply in being seen they send a forceful message to voters and the community they stand for and with.

Scenic vista by mesmerizing view, delegates from all 50 states and seven U.S  territories announced their vote tallies for the Democratic nomination, which of course overwhelmingly fell to Joe Biden on a night whose messaging was devoted to illustrating the party's emphasis on affordable health care, a promise to contain the pandemic, and calls to shore up our national security and reputation and to protect and welcome immigrants back to our shores.

Biden's Tuesday night message was one of empathy, effectively conveyed in a segment in which Americans talked about the ways in which the Affordable Care Act enabled them to battle diseases and conditions that otherwise would have killed them, ending with a speech from activist Ady Barkan, who lives with ALS.

Representing every state was an intercultural, intergenerational mixture of politicians, students, community leaders and activists, solid everyday folks and figures thrust into public life out of necessity, not choice.

Some offered messages in their short speeches. Others delivered what they wanted the world to understand by their very presence, such as registered nurse Scheena Iyande, who cast New York's votes, and Filipino-born Amy Agbayani, who announced Hawaii's delegate allotment.

Still others were made memorable by their unintentionally humorous showings on behalf of their home states, such as Rhode Island's spokesman hailing his home as the "calamari comeback state." A masked man stood nearby with a platter of golden battered and fried cephalopods, and social media memes schooled in their wake almost immediately.

This is how DNC organizers answered the question of how a major party could handle a pandemic version of its convention, a circumstance that makes business as usual impossible despite the Democrats' pro forma staging.

Traditions like this are about as needed as a crowded convention center floor teeming with strangers in coordinated t-shirts and party flair. Where's the sales pitch in that when we have blue skies, open beaches and a view of what our nation looks like without a consultant's staging — and without traffic, for that matter?

Tuesday's list of speakers included those considered to be the party's big guns at past conventions, including former Presidents Bill Clinton and Jimmy Carter, and former secretary of state and 2004 Democratic presidential nominee John Kerry. Senate Minority Leader Chuck Schumer and former acting attorney general Sally Yates, fired by Trump in 2017 after she refused to defend the Muslim travel enacted by executive order, also appeared, along with freshman New York Rep. Alexandria Ocasio-Cortez, who seconded the nomination of Bernie Sanders.

Other everyman scenes worked too, particularly that of Biden accepting his nomination in a local library in Delaware, and his wife Jill Biden's headliner speech. It wasn't as substantial as Michelle Obama's, but her graceful, seamless walk-and-talk through the halls of a local school was silken enough to impress Aaron Sorkin himself.

The Democrats' modern legacy was represented by video testimonials from John F. Kennedy's daughter Caroline and her son, Jack Schlossberg; by the Carters and Clinton, although the latter is perhaps not the promotional asset he was in years' past.

They played the roles they're supposed to, mainly bludgeoning Trump's failure to lead and citing time and again his "it is what it is" reaction to a death toll that now tops 172,000. Kerry landed the night's greatest body blow with his summation of Trump's international reputation. "When this president goes overseas, it isn't a goodwill mission, it's a blooper reel," he said, later adding. "America deserves a president who is looked up to, not laughed at."

Not every element of Tuesday's DNC telecast worked. For example, as likable as "Black-ish" star Tracee Ellis Ross is, her earnest presentation as the event's moderator, throwing from one set piece to another, at times gave the evening the air of a PBS fund drive. By the third time someone reminded us of the texting code I half wondered whether I'd get a tote bag or a "Downton Abbey" DVD box set for my efforts.

In stepping out of the studio and offering a visual manifestation of its recurring theme of "We the People," the Democrats created a fine made-for-TV version of a socially distant roll call by reminding us of what we have — and what we are so painfully being kept from experiencing first hand. Linking prairie vistas to ocean fronts and cityscapes, and even to the interiors of community spaces, asks us to appreciate the manifold differences in where we live and who we are.

Maybe somewhere out there somebody is missing the gossipy potential to be had in parsing the finer details — the color of a poorly chosen tie or a glaring pantsuit, the level of natural ease in a candidate's gait or smile — for meaning. But in an election where the urgency of the common voter's voice contains a life-or-death significance, and in an era defined by feeling so far apart from others, here was a view of how proudly and wildly diverse America is, geographically and culturally.

That successful visual also makes one wonder what is to be gained in going back to the previous way of doing this business, other than following longstanding rules of how conventions are done. Tradition can be a blessing in a situation such as this because we know what to expect. Plus, there's a benefit in following class dictates as well as explaining them, which could have helped viewers better understand what led to Ocasio-Cortez's nomination speech in support of Sanders.

That was a planned ceremonial honor acknowledging the number of delegates Sanders secured in his run for the presidency — about one-fourth of the total, even though he ended his campaign in March — and the fact that the Vermont senator is clearly close to the end of his time on the national stage. Rep. Bennie Thompson of Mississippi, the convention chair, explained what Ocasio-Cortez was doing. We would all have benefited from a bit more explanation in the moment, but none was forthcoming on CNN or MSNBC.

Yet some onlookers were so taken aback by her remarks that a few online explanations followed afterward, including via tweet from AOC herself.

That didn't stop some news outlets, even NBC, from characterizing her speech as some sort of coup:

"In one of the shortest speeches of the DNC, Rep. Ocasio-Cortez did not endorse Joe Biden," read a tweet from the NBC News official account, quoting Ocasio-Cortez's seconding of "Bernard Sanders of Vermont for president of the United States of America."

At least MSNBC ran the roll call without interruption. CNN broke in with a block of commercials, which had the misfortune of robbing the channels' viewers of hearing Hawaii's Agbayani offering this message to fellow immigrants, essential workers on the front lines, military service members and parents: "No matter where we came from, immigrants belong in our country's long fight for justice. We belong in the America we are building together."

The lesson here is that this convention is best enjoyed by watching C-SPAN.

Circumstances being what they are, the failings could have been far worse. The political version of this festival for policy and lawmaking squares could have been a festival of actual squares, and one that some people navigate better than others.

Take that opener, for example. Former Georgia gubernatorial candidate Stacey Abrams brought the speech train into the station with her version of the refrain every co-headliner shared, warning about the dire implications of not voting Democratic and conveying a message of calm and reason, if not hope.

Her smiling face held the center position anchoring the many friendly tiles around her, reflecting the party as a varied mosaic of age, culture, backgrounds, identities and ideas. They're all up-and-comers, and Abrams herself is a celebrity within the party — even if she didn't get the running-mate spot that went to Sen. Kamala Harris, who will speak on Wednesday night.

AOC used her brief time wisely to concisely spell out the progressive Democrats' platform in her nominating speech — the one that Sanders foregrounded and that she will clearly carry forward. But in terms of heft and emotional resonance, what she said simply provided decent theater in the moment. The outward-looking views of our land, its people, their vision, their concerns — and that pile of fried snackable squid — that's what'll stick with us in the long run.

Not matter how heavy a historical moment feels while we're in it, the fame these political figures enjoy will fade with time.  Watching the nation's people stand in their communities and be seen and counted is a sign that won't get old, and I hope it repeats itself four years from now.