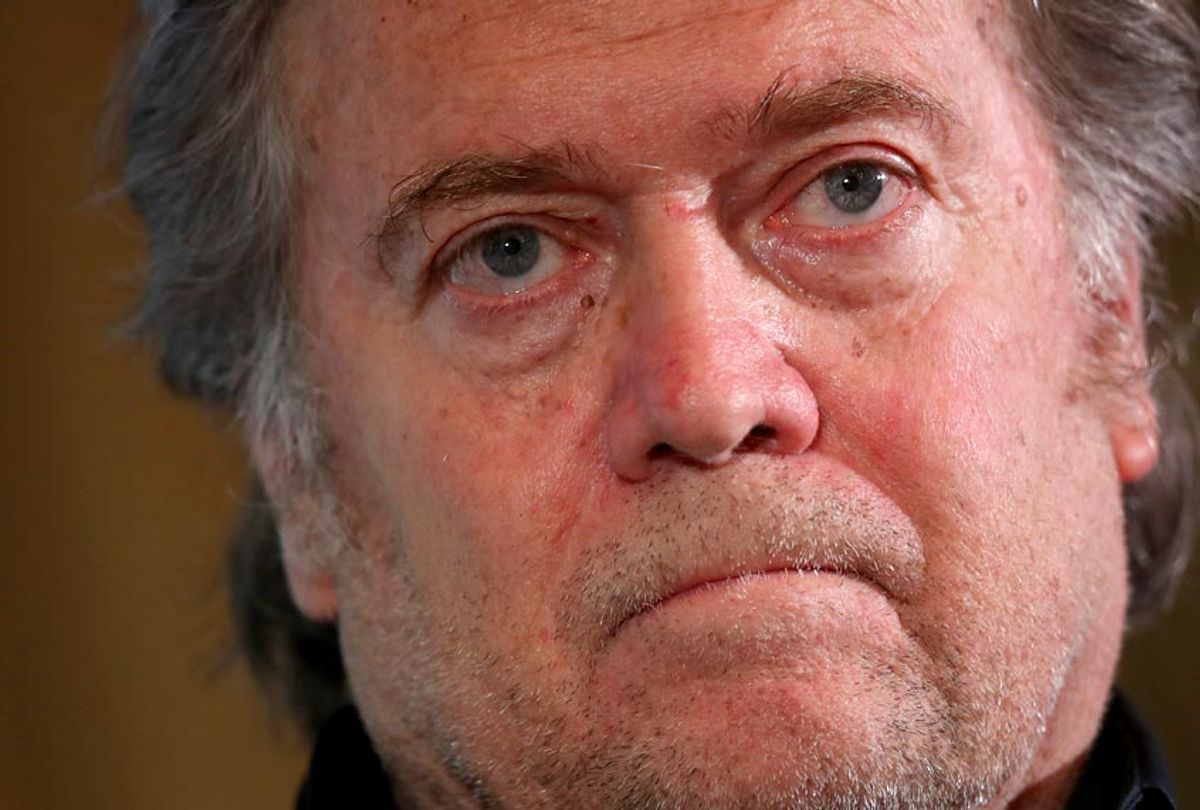 Bannon was reportedly arrested by agents with the U.S. Postal Service while aboard a boat off the coast of Westbrook, Conn. He is due to appear later Thursday before a federal judge in the Southern District of New York.

The former Trump campaign CEO and associates Andrew Badolato, Brian Kolfage and Timothy Shea were indicted on wire fraud and money laundering charges in connection with the online crowdfunding effort, which raised more than $25 million in total.

"As alleged, the defendants defrauded hundreds of thousands of donors, capitalizing on their interest in funding a border wall to raise millions of dollars, under the false pretense that all of that money would be spent on construction," acting U.S. Attorney Audrey Strauss said in a news release.

The group repeatedly assured donors that Kolfage — a triple-amputee military veteran who was the founder and public face of the campaign — would not make a penny, according to the indictment. Meanwhile, they allegedly contrived to funnel him hundreds of thousands of dollars, which Kolfage used to fund a "lavish lifestyle." The men then worked to conceal the transfers, prosecutors claimed.

Bannon pulled in more than $1 million from the scheme through an unnamed non-profit — "and at least some of it was used to cover hundreds of thousands of dollars in [his] personal expenses," the indictment alleges. (Last July, Bannon launched "Citizens of the American Republic," a nonprofit he described as "dedicated to fighting for American workers and sovereignty.")

Among Kolfage's alleged purchases were a golf cart and a 2019 Jupiter Marine boat named the "Warfighter."

The group started "We Build the Wall" as a GoFundMe campaign in late 2018, pitching it to prospective donors as a way to privately make Trump's border wall a reality in the face of opposition from Democrats in Congress. Donald Trump Jr. spoke last summer at a three-day fundraising event for the group, whose online operations had come under media scrutiny prior to Thursday's legal action.

According to the campaign's website, the group "will focus on building portions of a U.S. Southern Border wall and manage the support operations required for, and the processes associated with, the design, engineering, construction and maintenance of the wall." The group promised to "return every penny" if it did not meet its fundraising goal.

When the group learned last October that the campaign might be under federal investigation, the four indicted co-conspirators turned to communicating over encrypted messaging apps, according to the indictment.

"The defendants allegedly engaged in fraud when they misrepresented the true use of donated funds. As alleged, not only did they lie to donors, they schemed to hide their misappropriation of funds by creating sham invoices and accounts to launder donations and cover up their crimes, showing no regard for the law or the truth," the U.S. Postal Service Inspector-in-Charge Philip R. Bartlett said. "This case should serve as a warning to other fraudsters that no one is above the law — not even a disabled war veteran or a millionaire political strategist."

The day before Kolfage was arrested, he tweeted that he had taken down his "We Build the Wall" GoFundMe page — "the largest @gofundme campaign ever" — in response to the platform deleting his "Black Lives Matter is a hate group" fundraising page, which he launched earlier this week. He vowed to "not give them another penny" beyond the $27 million already raised.

Last year, leaders of the Republican-led Senate Intelligence Committee named Bannon in a criminal referral to the Department of Justice over suspicions that he might have lied to the panel, according to multiple reports. Don Jr. and the the president's son-in-law Jared Kushner were also referred to the department.

According to a letter sent to Justice Department, the committee believed that Bannon and Erik Prince, a Blackwater security contractor and brother of Betsy DeVos, might have lied about Prince's backchannel meeting with a Russian oligarch.

Bannon is the seventh Trump 2016 campaign aide to be indicted, and along with Paul Manafort, the second 2016 campaign head to be charged with money laundering.

In a book published last year by journalist Michael Wolff, Bannon allegedly described Trump's business empire as a "criminal enterprise" and speculated that the president was lying about being a billionaire.