As the president falls back on "READ THE TRANSCRIPT" (we have), Steve Bannon returns to make things worse 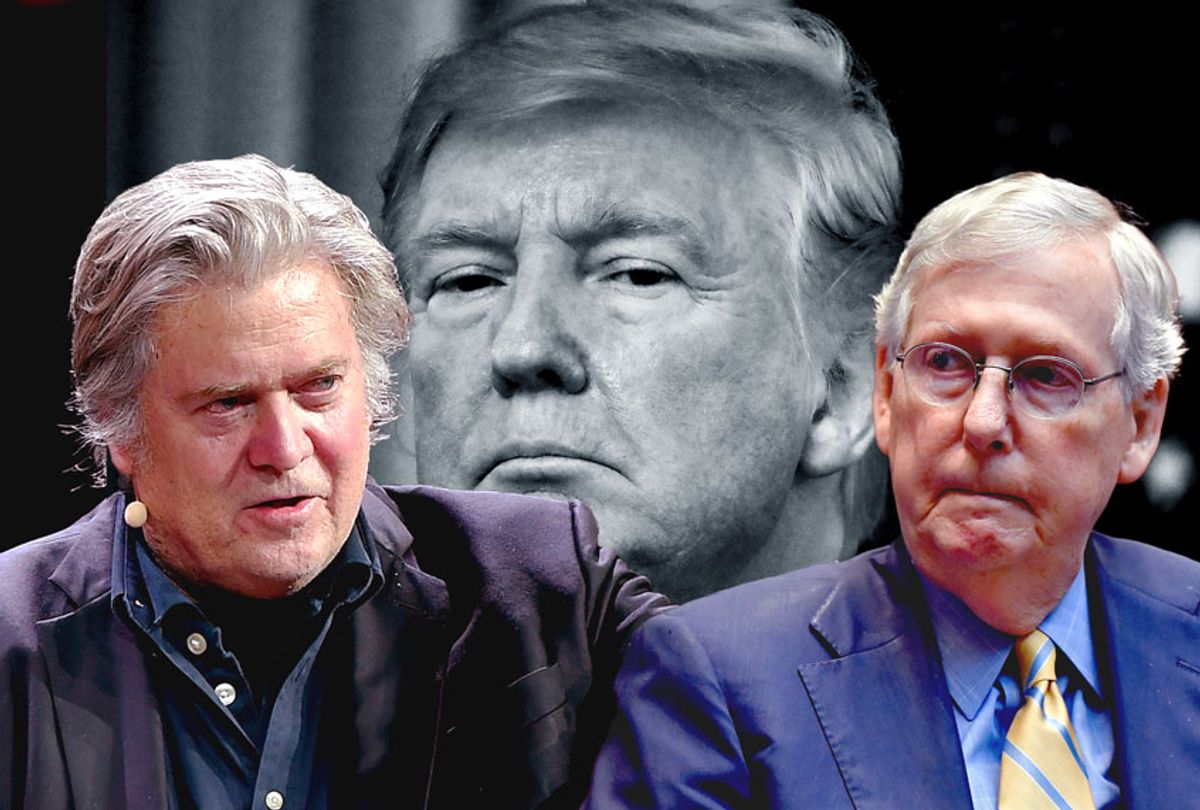 President Trump made history on Thursday, and not in a good way. The House of Representatives took its first vote on impeachment, passing a resolution that governs the terms of the inquiry, 232-196.   If this proceeding goes all the way, as it likely will, Trump will become the third president in history to be impeached.

Even he knows that won't look good in the history books, especially since he's accused of a serious abuse of power by extorting a foreign government to smear a political opponent. Of course, this comes on top of the Mueller report, which laid out 10 possible counts of obstruction of justice and a long list of errors in judgment that should disqualify him from ever running for office again. No matter what happens, Trump's legacy is already set.

Although it's highly unlikely that Trump will be convicted in the Senate and removed from office, it's not something a smart person would leave to chance. But this is the Trump administration we're talking about, so you just never know what they might do to turn it into a probability. After all, he escaped accountability from the Mueller report and then immediately went out and did exactly what he'd been suspected of doing in the first place. Learning from his mistakes isn't one of Donald Trump's strong suits.

As I mentioned earlier, Trump and the Republicans have decided to use the same strategy they used during the Mueller investigation. They believe it was successful and see no reason to change course simply because they are dealing with a new case that's unfolding in real time. They are attacking the proceedings as illegitimate ("witch hunt!") and insulting and degrading those who are testifying to his abuses. I don't expect them to hold back.

They will also project their own behaviors back on to their accusers, which will be echoed and repeated in the feedback loop that goes through Fox News, the White House and talk radio. Take, for example, this absolutely astonishing comment from Rep. Devin Nunes, R-Calif., on the floor of the House before the vote on Thursday:

It is interesting to note that for a few minutes after the vote the White House tried to pretend that Trump would adopt the Bill Clinton strategy of showing the president working on "policy" despite the threat of impeachment. But Trump was back at it immediately, calling the inquiry "the Greatest Witch Hunt in American History." At a luncheon with GOP senators (obviously called to shore up his support) he repeatedly told them what a great decision he'd made to release the rough transcript of his call, which he again described as perfect. It must have been hard for them not to roll their eyes at that one. Trump has made a lot of bad decisions, but that one rates right up there as one of the worst.

Nonetheless, Trump is sticking with his absurd "you can believe me or you can believe your lying eyes" approach by tweeting out in capital letters "READ THE TRANSCRIPT" (without including a link to it, mind you) as if by asserting that it doesn't say what it clearly says, he can make it so. He is so committed to this bizarre tactic that he told the Washington Examiner on Thursday that at some point he's going to read the rough summary of the call in a live fireside chat on television because people have to hear it. He also declared that he has no intention of cooperating with the investigation in any way because he's very concerned about setting a precedent for future presidents. He's pulling no punches:

He outlined a strategy for fighting back that would rely on the White House account of his phone call with the Ukrainian president, including T-shirts with the slogan, “Read the transcript.”

Trump is also reportedly showering money on senators who signed on to Lindsey Graham's resolution condemning the House impeachment, and openly snubbing those who didn't, apparently unconcerned about the fact that it looks as though he's bribing the jury that will decide his case. Considering all the previous times he's publicly dangled pardons and intimidated witnesses and has gotten away with it, you can't really blame him. Donald Trump is not one to worry overmuch about the "appearance of impropriety."

Some of his erstwhile allies aren't all that confident in this bribery and T-shirt strategy, however. The Daily Beast reports that Trump's former campaign chairman Steve Bannon is back in the U.S. after a stint in Europe trying to organize the neo-fascists. Apparently, he got that job done and has come home to rescue the president.

Bannon is doing a daily podcast called “War Room: Impeachment,”  which he presents as an alternative view. He says Republicans should try to change perceptions of Trump by going on CNN instead of Fox and speaking to the New York Times instead of Breitbart. This is in keeping with his earlier involvement with the phony Government Accountability Institute, which was founded for the express purpose of laundering propaganda through mainstream news outlets. (Sadly, the media fell for it in 2016.) But essentially, Bannon is just saying the same things Trump is saying, which makes his alleged "alternative" pretty useless.

Alexander Nazaryan of Yahoo News reports that Bannon has a bigger plan in mind which may have an effect, however. He's planning to open a "staffed war room” that will "forcefully counteract the fast-moving Democratic impeachment effort."  Complaining that Republicans and the White House aren't getting the job done properly, Bannon hopes to roll out a full-fledged “rapid response, polling, messaging, surrogate" political operation.

Nazaryan notes that Bannon's last attempt at helping Trump back in 2017, before he angered the president by cooperating with Michael Wolff on the latter's book "Fire and Fury," didn't have great results:

He vowed to run primary challengers to Republican incumbents in the Senate, many of whom he charged with being disloyal to Trump. But his ambitions have sometimes outstripped his organizational capacity. The Senate challenge largely fizzled out with Roy Moore’s inauspicious campaign, in which Bannon played a central role.

I think we all remember those Bannon rallies in which he attacked the Republican establishment, deriding Mitt Romney and Mitch McConnell alike. That's what Bannon's always been interested in, far more than helping Trump, who he has always seen as a crude tool for his populist nationalism. His podcasts suggest that he's still on that project, as anxious to blow up the GOP as the Democrats.

Trump would be wise to keep an eye on this little project. Bannon may not be able to stop himself from antagonizing the Republicans in the Senate. And if there was ever a time when Trump needs friends and allies in that chamber, it's now. All that stands between him and removal from office is the remnants of the "Republican establishment" that Steve Bannon wants to destroy.